Southampton: England's James Anderson has targeted another Ashes series against Australia and has his eye on 700 Test wickets after making history against Pakistan in the drawn third Test at the Rose Bowl on Tuesday.

Anderson became the first seam bowler to reach 600 Test wickets when he had visiting captain Azhar Ali caught at slip by Joe Root, but any thoughts this might be a good time for the 38-year-old to hang up his boots have been swiftly batted away. 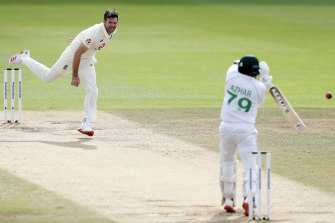 Azhar Ali edges one at the Rose Bowl to give James Anderson his 600th Test wicket, the first quick to achieve the mark.Credit:Getty

"Why not?" he replied when asked by reporters if 700 Test wickets were now in his sights. "I feel like I still have a lot to offer this team and as long as I feel like that I will keep on going.

"I will have to be wise about which games I play and which I don’t, but that is something for the selectors, coach, captain and medical team to help me with. We will discuss what is best for the team and best for me, I guess."

England are due to tour Australia next year, though the COVID-19 pandemic means the dates for upcoming series have not yet been set.

Anderson, though, is keen to have another crack at the Ashes.

"I have chatted to (captain Joe) Rooty about it and he said he would like me to be in Australia. I don’t see any reason why I can’t be.

"I don’t think I have won my last Test match for England yet. We don’t know when the next Test will be, but I will keep working in the gym."

Anderson had come in for criticism prior to the third Test after a below-par home summer.

While he admits he has struggled at times, he believes his match haul of 7-101 saw him find the rhythm that had been missing at times in recent months.

"I have not enjoyed parts of this summer and I have struggled with not being able to switch off. It did feel a little bit tough at times for me. That made me work harder these last couple of weeks on my technique.

"I have felt in great rhythm this week, as good as I have in a while. I am just happy getting to this milestone and winning both test series this summer."

England beat West Indies 2-1 in the first Test series since the COVID-19 pandemic suspended the sport in March.