In an era when athletes supposedly shun "external noise", Steve Smith put his ears to the "four walls" and heard what he wanted to hear. And it worked.

Smith's defiant response to the "critics" who said he had been in a form slump makes for a good narrative, except the doubters were few and far between. 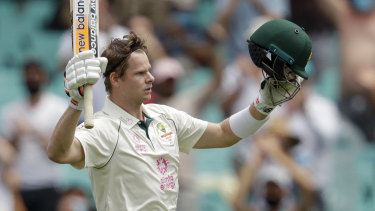 This anecdote from Chris Rogers from the day the pair took the team van to a Perth pub – in 2013 when players were allowed to do that – provides context to what drives Smith.

Australians saw Smith at his most vulnerable during his heart-wrenching mea culpa in the aftermath of Cape Town, but on this occasion it was Rogers who saw him with the mask off.

At that point, Smith was a 24-year-old who had grown up in the cricket bubble – of the non-biosecure variety – and invested heavily in the game. His numbers were moderate, averaging 33 from 14 games with 67 runs from his past five knocks.

"He got really emotional and really vulnerable," Rogers recalled on SEN on Saturday. "He admitted how hard he was coping with it. He was pretty upset, very upset.

"I just saw a pretty vulnerable young kid. They're not bulletproof these guys. This is a guy who didn't finish school, didn't get his driver's licence until he was 23, 24, he's lived in this kind of cricket bubble all his life, he wouldn't know much else."

Rogers has a theory that Smith pulled a leaf out of Jose Mourinho's playbook and created the storyline that "the world's against me" to provide him with extra motivation, even if it might be built on a false premise.

"You're almost showing people they were wrong, whether that's healthy or unhealthy," Rogers said.

"Maybe unhealthy after cricket but, during the time you're playing, sometimes that's the best motivation you need."

Andrew Symonds may have introduced a lot of us to the term “hog pile” in he and Shane Warne’s expletive-laden gaffe mocking Marnus Labuschagne, but could the hog in this instance have been Hogg, as in Brad Hogg?

According to Symonds, the Australians used to pile on the former left-arm wrist-spinner, who was regarded as a bit of a "pest" by his teammates, to pull him into line. The stacks on became known as the "Hogg pile".

"I'd run around the ground until I caught him, then I’d tackle him to the ground and all the other boys would come and pile on," Symonds said on Fox Sports in 2016.

"Now Hoggy was a bit claustrophobic and it would get to the point where he said, 'All right Roy, that's enough, get off me'. Then I’d wait a little bit and I’d look around before saying, 'All right boys', and then they'd climb off him."

Thunder on the road

Sydney Thunder's stint in hotel quarantine is over but it might be several weeks before the men in lime are able to return home.

Cricket Australia has already moved three games from Sydney to Canberra, with five more scheduled for the city in danger of being relocated. One of the games is the second Sydney derby, slated for January 22 at the SCG.

The Thunder were confined to their hotel during the Perth swing of their season after the Western Australia government reinstated its hard border to Queensland after a positive test to the UK variant of coronavirus was recorded in that state.

There have been marked variations in the BBL10 experience for some clubs. The Thunder haven't had much luck but others, such as Hobart, have dodged the hotspots so enjoyed relatively relaxed protocols.

Many Australians would have attempted to find a way around the restrictions in place during the pandemic, and fans at the SCG are no different.

Our spies tell us some punters on Saturday were consuming their beers particularly slowly to avoid having to don a mask under the summer sun.

The wearing of masks at the Test was made mandatory to reduce the chances of a potential coronavirus outbreak at the game.

The authorities, however, have wised up to the ploy and asked patrons to put their masks on between sips.

Former Test spinner Gavin Robertson has been through the wars recently but there's some good news for the Sydney cricket identity. He's had the nets at Drummoyne Oval named after him.

Robertson is first-grade player No.393 for the Sydney Cricket Club, which plays its home games at the picturesque ground.

The former offie, also a much-loved figure with AFL club Greater Western Sydney, had a brain tumour removed in 2019. Last month, he had to leave Adelaide, where he was on commentary duties, after just one day due to Sydney's northern beaches coronavirus outbreak.