Home » Sports News » ‘I was happy … besides the politics’: Langer hits out at CA

Langer, who quit the national role earlier this year after only being offered a six-month contract extension, criticised the “bullshit politics” of Cricket Australia during an address at a West Australian Chamber of Commerce event on Wednesday.

An angry Langer told the audience of a conversation with Richard Freudenstein, who at the time of the coach’s departure was the acting CA chairman.

“The first thing he said to me was, ‘It must make you feel so good that all your mates are supporting you in the media,’” Langer said.

During the discussion about his future in the game, former Australian greats such as Adam Gilchrist, Matthew Hayden and Ricky Ponting were highly critical of the way Langer was treated by CA hierarchy. 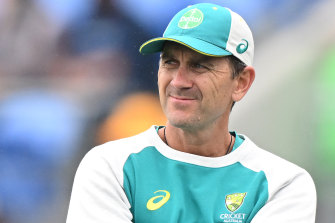 Despite this support, Langer’s coaching-style was believed to be unpopular with many members of the Australian team.

Langer also denied he had ever considered working for the England Cricket Board in a coaching capacity.

“The thought of coaching England … mate!”

Langer added he was very happy with the final period of his coaching regime.

“Ironically, the last six months of my coaching career were the most enjoyable period of 12 years of coaching.

“Not only did we win everything, but I had energy, and I had focus, and I was happy – besides the bullshit politics.”

Farnan in doubt for The Everest