Home » Sports News » Ice or fire, how will Steve Smith respond when the short balls begin?

Steve Smith has a big decision to make in the next few weeks: will he take Steve Waugh's punching bag approach to the short ball or will he fight fire with fire?

For the first time in a long time, opposition teams think they have a strategy to exploit Smith. Whether or not he or the Australian coaches believe it's right does not really matter. 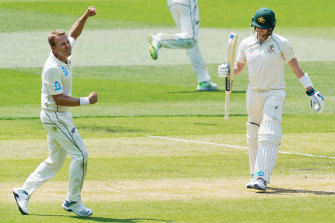 As well as Neil Wagner bowled against him last year, it should be pointed out Smith still averaged 43 and Australia won the series 3-0. Teams will have taken note that his strike rate of 34 was well below usual, so at the very least they can dry up his runs.

To me, it comes down to attitude for Smith. I recall an Ashes Test at the SCG in 1995 where we were chasing 449 over about a day and a half. Devon Malcolm, who was one of the fastest bowlers in the world, was posing many concerns to me with his short-pitched bowling.

I decided to take him on as I would rather go down swinging than popping one up to bat pad or the man they had set up around the corner. After I nailed a few hook shots and got off to a flyer – it was one of the few times I scored faster than Michael Slater – England adopted a more conventional line and length strategy. This aggressive approach helped Slats and I: we both made centuries and we saved the game.

Or he could adopt Steve Waugh's strategy. Waugh, who was dubbed the Ice Man for his steely resolve, stopped playing the hook shot, opting to wear a few instead. A lot of us thought in the dressing room: 'How can you keep going like this?', but he was mentally strong and extremely determined. His record suggests it worked for him.

I don't have any doubts over Smith's courage but I suspect he will want to take it on.

That said, Smith has the temperament to absorb the blows as he is one of the few players I've seen who is not bothered if his score is not ticking along. Some players feel the pressure and get out to rash shots but Smith just keeps batting and batting – probably because he loves it so much.

The Test series is the main prize but if India are to retain the Border-Gavaskar Trophy they will need to play well in the one-day internationals and Twenty20s.

If they struggle and negativity pervades the camp this could be big trouble for them, especially with captain Virat Kohli to leave after the first Test.

I won't do a Glenn McGrath and declare a whitewash but it becomes a distinct possibility if Australia can maintain their perfect record in the pink-ball Test and go one up in Adelaide.

India need to stamp their authority in the white ball games and show the Australians they are up for the challenge. It could be trouble otherwise.

Flintoff believes Phil Neville could have been a cricket great