The NSW Government has given the green light to India quarantining and training in Sydney, only 72 hours after Cricket Australia lodged an application following pushback from Queensland.

CA was made to wait for five weeks by the Queensland government and its health department only to learn in a meeting on Monday that there were major reservations north of the border about the sport's plan for Virat Kohli's side to spend their first two weeks in Australia next month in Brisbane. 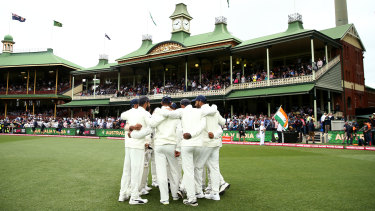 The NSW Government has approved Cricket Australia’s proposal for India to quarantine in Sydney.Credit:Getty

Cricket officials have been left disappointed by their dealings with Queensland on their biosecurity plan for India but they can breathe a sigh of relief after being made to wait far longer than they would have liked to confirm the game's international men's summer programme.

Though CA was still awaiting sign-off from the Board of Control for Cricket in India cricket officials, an announcement of the revised Test and limited-overs calendar is imminent following the NSW approval on Thursday.

The plan includes Kohli's team starting a six-game white-ball run against Australia at the SCG the day they come out of quarantine.

Under NSW's proposal, India's players will be able to train while completing their 14-day period in isolation, whereas the Queensland government wanted the visitors to stay at a resort to avoid exposure to the public while travelling from their hotel to training.

Sources familiar with the schedule have said Sydney will host four of the six matches between Australia and India (the teams are playing three one-day internationals and three Twenty20 internationals before a four-Test series) and Canberra will stage the other two. These matches were slated to be held in Brisbane and the Gold Coast.

Queensland's intransigence is shaping as a massive boon for Sydney, which will gain significant global exposure with what is shaping as a festival of sport. The city will play host to State of Origin, the Wallabies and now the world's most watched cricket team.

Cricket officials are confident they will be able to sell out the SCG four times, with the venue's capacity reduced to 23,000 by COVID-19 restrictions. Sydney is home to a large Indian diaspora who rarely get to see Kohli's side play live.

The impending release of the international schedule will ease some of the pressure CA is facing from Seven West Media in their high-stakes broadcast rights feud, which is set to head to the Australian Chamber of International and Commercial Arbitration.

The network is seeking a reduction in fees due to the uncertainty over the schedule caused by the pandemic and concerns over the quality of the Big Bash League.

CA have offered a small reduction but believe they will honour their obligations by staging a full international and BBL season.

Under the reworked schedule, still to be confirmed, the first Test would be held in Adelaide from December 17 to 21 before Melbourne stages the Boxing Day Test from December 26 to 30, Sydney hosts the New Year's Test from January 7 to 11 and Brisbane holds the fourth match from January 15 to 19.

CA hopes the border between NSW and Queensland will be open by then.