Ahmedabad: Labourers masquerading as cricket players, clever camera angles and fake team names were all part of an elaborate hoax cricket league in western India shown on YouTube that was used to draw money from gamblers in Russia, police said on Monday.

Fashioned along the lines of the popular Indian Premier League, a group of men in the western Indian state of Gujarat hired a field, set up cameras and asked local labourers to dress up in team uniforms and play cricket.

This was then streamed — complete with fake crowd noise downloaded online — to unsuspecting betting operations in Russia, who bet on match outcomes, Achal Tyagi, the top police official in Mehsana district said on Monday.

“They had umpires with walkie-talkie sets to officiate as they have in IPL and international cricket matches,” Tyagi said.

“The set-up was good enough to trick unsuspecting people into believing it was a genuine cricket league.”

Police arrested four people in connection with the case on Friday. The fake tournament reached the quarter-final stage before being shut down. 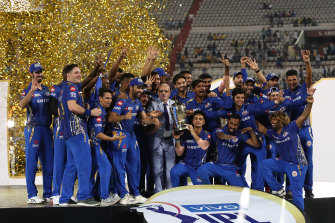 The fact the real IPL had ended a month prior appeared to be no hindrance to the alleged organisers or gamblers involved.

Tyagi said the umpires were telling players whether to score runs or get out depending on the instructions they were given on the walkie-talkie sets received from the organisers, who in turn were receiving instructions from an accomplice in Russia on the Telegram app.

Betting on cricket is illegal in India, and the four arrested have been charged with criminal conspiracy and gambling, local officials said.

The IPL, the world’s richest T20 league, was embroiled in an illegal betting scandal in 2013 which led to two-year suspensions for its Chennai and Rajasthan franchises.

The 10-team league’s popularity could be gauged from the sale of its media rights for the next five years, which fetched the organising Indian cricket board a whopping $6.2 billion (A$9.2b) last month.

Finch out of first Windies ODI, Carey to captain Australia