It was a moment few will forget, when Australian cyclist Alex Porter’s handlebars snapped from his bike just a kilometre into a 4000-metre race, leaving the 25-year-old’s face battered and bruised, as well as Australia’s hopes for the team pursuit gold medal at the Tokyo Olympics.

At the time, a shellshocked Porter told the Olympic rights holder Channel Seven that the moment was one of utter confusion. 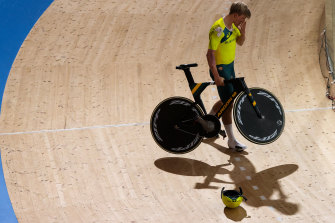 “I could just see the track getting closer to my face.

“At first, I thought it was a dream because my brain couldn’t work out what was quite happening. And then, just before I hit the track it kind of clicked that something on the front of my bike had just fallen away.”

AusCycling’s inaugural chief executive Marne Fechner has since launched an official review into the incident, but that is just a small part of what has now triggered a broader investigation throughout the sport, to see where athlete safety “is really at”.

Melbourne-based company Bastion Cycles, which supplies components to the Australian cycling team, has said it “can confirm the part was manufactured by us,” but haven’t stated their unit caused the crash.

Alex Porter heads off the track after his handlebars snapped off mid-race in Tokyo.Credit:Getty Images

The investigation is being conducted by independent experts, with a presumption of no blame until the technical elements of the crash have been assessed. It is expected to deliver findings before the end of the year.

“We welcome AusCycling’s announcement regarding a probe into the incident that occurred during the men’s team pursuit race at the Tokyo Games, we will support the investigation by every means possible,” an official statement from Bastion Cycles said.

Fechner said the accident “was devastating for Alex and the team, and we want to make sure it never happens again. It affected the athletes as well as the coaches and staff who have put hours into preparation, but also our cycling community that cares about the history and heritage of our performance at elite events”.

She is determined to be “transparent” and “thorough” as AusCycling works alongside an external body to complete the review.

“Off the back of the Olympics we are doing a deeper dive into our high-performance system at the moment with the view of establishing a baseline of where are we really at in terms of culture and performance.”

AusCycling is the sport’s newly formed national body, an amalgamation of 18 state and disciplinary-specific organisations, and as it celebrates its first birthday this November, it will continue its deep-dive into the physical and mental safety of its athletes, as well as the culture of the high-performance structure.

“I think sports reviewing themselves can be less than optimal, so part of what we will do is provide a safe space for our athletes, our staff, the people within our high-performance system to reflect with an independent body.”

The Tokyo Olympics has proven to be a catalyst for discussions about athlete safety. Beyond obvious concerns around the COVID-19 pandemic, there have been poignant conversations about physical and emotional safety for professional athletes.

Fechner refers to this as an “ecosystem” and it encapsulates everything from the equipment they use, their training facilities, to their mental health practices and life outside the sport.

This comes at a time when controversies over athlete wellbeing in other sports, such as swimming and gymnastics, are common knowledge, and Football Australia launched an independent review after former internationals Lisa De Vanna and Rhali Dobson made public allegations of bullying and harassment during their careers.

Similarly, Swimming Australia has established an independent panel tasked with investigating the treatment of women and girls in the sport following an explosive social media post from Olympian Madeline Groves.

While Fechner says she’s confident in the wellbeing systems AusCycling has in place, she’s not naive to the fact that it is an ever-evolving issue and needs to be top of mind for all sports.

“Culture is such an important aspect and it morphs, and it changes over time, the expectation of athletes today compared to twenty years ago is different from a cultural and environment perspective,” she said.

“Sport is all about the people, and we can’t treat every individual in our sport the same, but we can provide an environment and systems that see the individual and provide the best possible space for them to excel, on and off the bike.”