The Milkybar Kid might be unknown to punters, but he’s set to break the record of Winx and Black Caviar as the shortest-priced runner in Sydney this century when he takes on just one rival at Warwick Farm on Wednesday.

Only The Milkybar Kid and Naval Warfare remain in the staying contest after a raft of scratchings from an original field of eight acceptors in the race due to jump at 2pm. 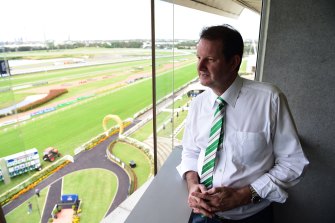 Racecaller Darren Flindell faces one of his biggest challenges as The Milkybar Kid and Naval Warfare face-off in a Macth race at Warw]ick FarmCredit:Nick Mop

Many betting agencies are not offering markets on what looks like a lopsided contest, but the TAB had The Milkybar Kid at $1.02 with Naval Warfare at $15 in its fixed odds market on Wednesday morning.

That seems a fair assessment considering Naval Warfare hasn’t won since New Year’s day in 2019 and was beaten 11½ lengths last start by The Milkybar Kid, which is chasing a hattrick of wins.

It offers a different challenge for racecaller Darren Flindell, who will have to fill more than two minutes of airtime with the race over 2140m.

“I’m looking for a co-commentator for that race,” Flindell said. “It is the race I’m going to have to put the most work into today because you can’t just keep calling the two names.

“I’m going to walk the dog and think of what I’ll do during the race.

“I think the State of Origin might get a mention at some point. It will one of the most challenging races to call, you would rather there be 16 [runners].”

There have been match races on country and provincial tracks in NSW and famously there were set-up two-horse races between champions – Let’s Elope and Better Loosen Up in 1992 and Big Philou and Rain Lover in 1970, both at Flemington.

“I give Naval Warfare a hope because he can run a good race and might just outstay The Milkybar Kid,” Flindell said.

However, punters should be aware that if the TAB’s tote market holds more money on The Milkybar Kid than it has to payout, under the rules a $1 dividend will be declared rather $1.04.

Frankie Dettori teams up with Ed Dunlop at Doncaster