In an Olympics that was filled with heartwarming tales, Saya Sakakibara’s was shaping up to be the one. The Aussie BMX star had dedicated her Games debut to her older brother, Kai, a fellow rider who was also set to feature in Tokyo until a crash almost two years ago left him with life-altering brain injuries.

Then she crashed. Sakakibara had only just lost the lead in her semi-final and was on course for a shot at a gold medal when she collided with US rival Alise Willoughby. Paramedics swarmed in, cameras zoomed out. The nation held its breath. 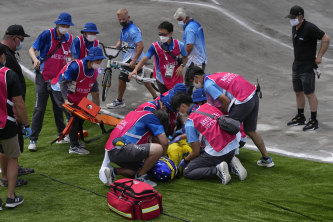 Saya Sakakibara of Australia is stretchered away by medics after crashing in the women’s BMX Racing semifinals at the 2020 Summer Olympics.Credit:AP

She eventually emerged unscathed, at least to the eye. But Sakakibara, 22, has been unable to shake the aftershocks of the incident, which has left her with nagging concussion symptoms that continue to persist more than two months later.

It’s slowly getting better, but there is still an unexplainable “fuzziness” in her head, and it’s stopped her from being able to thrash out her frustrations from Tokyo in competition, where she’d like to.

“It doesn’t feel quite right. I can’t really put a finger on it,” she told the Herald from her hotel quarantine room, which she is due to escape from on Sunday.

Sakakibara has experienced concussion before, but the symptoms did not last this long; she could race two weeks later. This time, they have been gratingly persistent.

There are few more disheartening injuries for athletes than concussions – they are invisible, unpredictable, and science still hasn’t quite figured out how they work or how to fix them. Sakakibara had no issues doing high heart-rate gym work, but when she tried to ride, she found her brain would quickly fatigue as it tried to absorb all the spatial information it was being fed, exhausting her for the rest of the day. 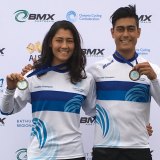 Saya Sakakibara and big brother Kai, who was seriously injured during a World Cup race in February last year.

“I wasn’t having memory or functioning problems that people sometimes have, like speech and stuff like that,” she said.

“It was just moreso, ‘am I going to feel good again?’ Every single day, I’m doing everything I’ve been told to do – which is not much, like, rest. It’s not improving. And it’s also this mental challenge of like, am I making these symptoms up in my head? Am I trying to feel something, am I biased in a way? That was really hard.

“It was scary. And I was worried there was actually something really wrong with my injury that I didn’t know. It was really putting me down.”

It meant she had to abandon her plans of competing at the UCI BMX World Championships in the Netherlands in August. More recently, Sakakibara has been improving, and she was hoping to be at the World Cup event in Turkey this month – but then a rare seat on a flight back to Australia became available. Once she’s allowed out of her hotel room, she’ll be seeking further advice and treatment on her concussion from specialists to ensure she’s fully recovered by next year, when Olympic qualification for Paris 2024 begins midway through.

But that’s just the physical toll of the crash. The emotional toll was heavy too – especially for a family which, sadly, is acutely aware of the precarious nature of brain injuries.

“I just thought, I crashed, and I got up, and it’s fine,” she said. “But then I realised how much everyone was waiting for me to emerge and be OK, especially with what’s happened with Kai. 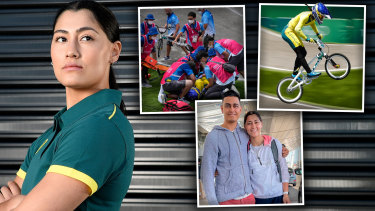 Saya Sakakibara is still suffering from concussion symptoms from her crash at the Olympics, which sent a scare through her family after her brother suffered a brain injury last year in the same sport.Credit:Getty, Instagram

“I just can’t imagine what my mum and dad were going through. I did an interview with Sunrise the next day and they kept playing my crash while I was speaking, and it showed my mum, grandma and Kai’s reaction to the crash. The fear on their faces was so … I was like, ‘oh my god, I’m so sorry I put you through that’.”

On a personal level, more than anything, Sakakibara is just annoyed – both that her Olympics finished up the way they did, and that she hasn’t been able to do anything about it. She might finally get a chance in December at the Australian titles if she’s fully recovered – by which stage she’ll have hopefully come to terms with what happened in Tokyo, too, which has been its own struggle.

“The first couple of weeks when I was reading some social media posts, Twitter, things like that, there were a lot of messages saying ‘you were robbed of a medal’, ‘you were doing so good’, ‘it wasn’t your fault’ type thing – which is all really, really nice,” she said.

“But it made me feel out of control of what’s happened. It was almost easier for me to think ‘well, I should have been faster. If I was faster, the US girl wouldn’t have caught me and had the chance to take me out’. It was easier for me to put the blame on myself. I didn’t like being the victim. When I switched that off, it helped a lot.

“It’s definitely just disappointing, I guess. I was looking at all the photos from Getty Images, and in all the photos, I’m in front – so I was doing really, really well. It’s just what it is.

“I’m sure, in time, I’ll find great perspective from it and have huge learnings. It’ll probably be one of the best things that’s happened to me.”