It’s a cricket yarn that reads like a Dreamtime story. It’s a dream cricket story. It’s already bound to be handed down through the generations.

Scott Boland is standing in the middle of the pack of Australian cricketers in the middle of a sun-kissed MCG, a crowd of nearly 50,000 chanting his name and five wickets alongside that name. He might have guessed that there was another to come in a moment. This day, seemingly all he had to do to take one was to introduce the ball to play. 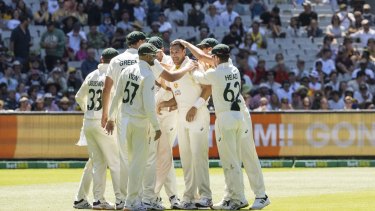 The Australian team get around Scott Boland.Credit:Chris Hopkins

It’s too surreal. He knows he’s expected to salute, but in his shyness can raise the ball no higher than ear level.

He, Scott Boland, 32 years old, 10-year cricket journeyman, more recently and proudly a legatee of Indigenous heritage, but only vaguely in the consciousness of the wider Australian community until two days ago, now a Mullagh Medal-winning Ashes hero, titans Pat Cummins and Mitchell Starc deferring to him? Quickly he lowers his arm again.

Moments later, game abruptly over, teammates try to push him forward as they make a mini-lap to thank the crowd, but he shrinks back among them. He still has the ball in his hand, and is still shining it, as if any minute now he might have to bowl another over. This is a dream, yes?

It’s not, though. In the stands, the fans are still roaring as they did when he was bowling. “I felt like they were sort of pushing me in when I was running into bowl,” he said. Already, fellow Indigenous cricketers Dan Christian and D’arcy Short are coming through on his text messages. 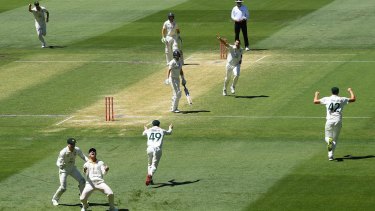 In the stands, Belinda Duarte nearly trips herself up as she dashes from the committee room to the boundary to perform the Mullagh Medal rites. Duarte is the first Indigenous member of the MCG Trust and a descendant of Dick a Dick, with Johnny Mullagh the best-known of the trail-blazing 1868 Indigenous team that toured England. She’s crying now.

“Some would even say the old people have had something to do with this,” she said. “We carry our old people everywhere. There were so many indicators today that they were by his side.”

In the beginning, there was … none of this. Half a dozen or so years ago, Boland was fighting for his place in a powerful Victorian pace attack alongside Peter Siddle, James Pattinson and Chris Tremain. He learned from them, also from fleeting Australian players John Hastings and Clint McKay. But if he ever had Australian prospects, he thought they were dead by then.

Until five years ago, Boland didn’t even know he had Indigenous blood. Then his family traced a missing branch on his mother’s side and found it. He was from the Gulidjan tribe in western Victoria. Without making a great show, because he never makes a great show, he embraced it.

In 2018, he, Christian and Short were members of an Indigenous team that toured England on the sesquicentenary of the original team. At Harrow in the western districts, Mullagh’s birthplace, he met Duarte and shared stories.

Everyone’s ground is special and different. That’s been a bit of an Indigenous lesson to the rest of Australia in recent times. Boland’s ground was and is the MCG. He’s now taken more than 100 first-class wickets there, at an average of 16. Hold that thought. The selectors did. 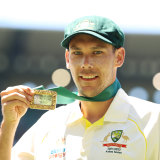 It was less than two months ago that the fates began to conspire as they only do in myths and fables. Boland quarantined in an Australian camp for two weeks on the Gold Coast. What struck captain Cummins then was his calm. “An experienced player is so valuable because they’re so level,” he said. “They’ve been through the highs and lows of a professional career. He was brilliant around the squad.”

But it was less than two weeks ago that Boland was added to the Australian squad as a contingency in case of injury or COVID emergency. It wasn’t until Christmas Eve that selector Tony Dodemaide told him he would be playing on Boxing Day.

Calm? Burly he may be, but Boland’s legs were shaking and his by his own admission his mind was “foggy”. At lunch on Boxing Day, he could hardly breathe.

Fortunately, Andrew McDonald, his old Victorian coach, now an Australian assistant, was on the spot. “He picked up that I was a bit tentative in my first two spells,” Boland said. “He just wanted me to up my run-up speed, which is key for me when I’m playing well.” A first innings wicket put him in the game. 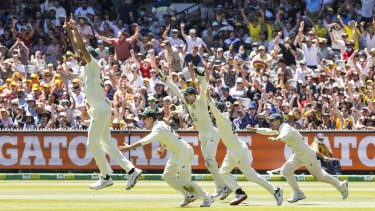 The Ashes are retained, and the Australian team celebrates.Credit:Chris Hopkins

Besides, this was the MCG, his territory, his turf. “When you’re so familiar with the ground, it made me more comfortable debuting here, and you know what lengths to bowl here,” he said. “You know what the bounce is like.

“As a Victorian, it’s different at a ground like the Gabba because you have to find your length. I feel I’ve found my natural length here now, and it’s been working well the last couple of years.”

That wasn’t all. This was the MCG pitch, but supercharged. On it, Boland became Boland-plus. The red carpet continued to roll out for him as it does only in fairytales and myths.

On Tuesday, Starc and Cummins softened up an already putty-like England batting line-up for him. That’s not to say his performance was a fluke. Striking his well-practised MCG lengths, he kept straightening the ball past the English bats. He left prolific England captain Joe Root helpless to avoid edging a catch to slip. You don’t do that by fluke. 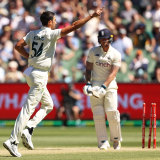 Nonetheless, Boland took all seven wickets that won him man-of-the-match in the space of just 29 balls across two innings. It was an Ashes hit-and-run. His second figures read 4-1-7-6. Not even in junior cricket in the southern suburbs of Melbourne has he had such a return. He was still rubbing the ball, but he should have been rubbing his eyes. Figuratively, he was.

Everyone was. “It wasn’t overly surprising,” said Cummins, himself a bit shocked suddenly to be an Ashes-winning captain. “He did what the selectors picked him for. We knew he was going to do a great job for us on the MCG. Well, maybe not 6/7.”

Boland won’t have another day like this. He might never get a pitch like this again. The aggregate of runs for this match was the fewest ever for an MCG Ashes Test, and Australia’s 267 was the third lowest score to gain an innings victory in any Test. Even the Melbourne Cricket Club (MCC) suspects this might have been a slight over-correction to its old notoriously flat self.

Boland might not even play in next week’s fourth Test in Sydney. He is the seventh seam bowler used by Australia in these three Tests, and next week they might all be available. Australia are as replete with bowling options as England are bereft in batting, in what has become a haplessly one-sided Ashes series. “It’s one of those days as captain when I’m glad I’m not a selector,” said Cummins. “Good luck to them.” 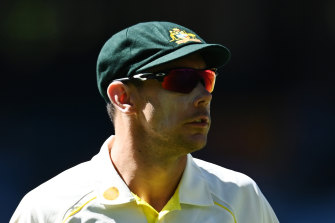 Scott Boland in his baggy green, and in his element.Credit:Quinn Rooney, Getty Images

In Boland’s mind, Tuesday was the tomorrow that he never thought would come, so he’s not even thinking about the day after. “Wait and see,” he said.

He waited. We saw. And neither he nor we still can quite believe it.