Jamie Kah stretched her lead at the head of the Victorian Jockeys' Premiership to nine when she starred on the final day of the spring carnival at Sandown, riding a treble including victories in two of the three feature races.

Kah has already set plenty of benchmarks in her short career, having ridden several group 1 winners and also landing the South Australian Premiership as a teenager. In this sort of form it would be a brave punter who laid a long price against the 24-year-old becoming the first woman to win the Victorian jockeys' title. 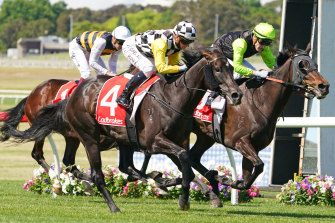 The vast majority of races in Australia are run at 2000 metres or less, ensuring that riders do not get as much experience over longer trips than some of their foreign counterparts.

But the South Australian horsewoman showed she is an excellent judge of both distance and pace when she landed the 3200m Sandown Cup aboard Carif for the Snowden stable and followed up 40 minutes later in the group 2 Zipping Classic aboard the Mike Moroney-trained Sound in the purple and white colours of New Zealand owner Gerard Peterson and his partners.

The latter victory really illustrated her capacity to sum up the situation in a race and act swiftly and decisively.

Kah made a crucial mid-race move knowing her mount was guaranteed to stay the 2400m trip, injecting some pace to go upsides leader Levendi . Sound was a willing partner, going clear in the straight and defying any attempts to run him down.

The Zipping is named after that tremendous old stayer who dominated the same event (when it was known as the Sandown Classic) for years in the Lloyd Williams silks, always making it his last start of the spring after running prominently in the Melbourne Cup.

Sound might himself have been competitive enough behind Twilight Payment at Flemington had he been able to make the Cup field.

But he and Kah were just beaten in the last strides by Ashrun in the last Cup qualifying race, the Lexus-Hotham on Derby day, thus missing out on a start.

The stayer had also been beaten by Persan in The Bart Cummings in early October, another race that guarantees the winner a Melbourne Cup start, so he certainly wasn't winning out of turn when he took out the $250,000 Classic. 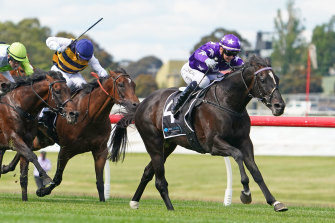 "It is probably just the last 18 months that he's started to look well. He came over from Germany [and] it took him a while to really condition up but he has now. He's got really strong," said Moroney.

"We were just disappointed that we got left in New Zealand after the Auckland Cup [in which he finished second in March, just at the start of the coronavirus crisis] and got stranded there because he missed the Sydney autumn as well.

"Great ride. It really was."

Kah was pleased to atone for Sound's narrow loss in the Lexus.

"I really wanted to ride him quiet today. I thought he really needs to chase something down. He's been hovering in front but obviously they went too slow down the back straight. I had Ollie [Damien Oliver] yelling at me to get going so I thought I should listen to him. I have to credit him.

"I really wanted to get him into the Cup for his connections last start but he just missed so he deserved this today."

Peter Snowden was equally complimentary about her riding prowess after Kah guided Carif to victory in the 3200m Sandown Cup and then survived a short protest hearing.

Meanwhile, John Allen also took the riding honours when he punched home a double on the Maher/Eustace-trained Junipal and then took the last race on Missile Mantra, giving the Snowden's a second winner for the day.