England captain Heather Knight has again shown why she is considered one of the best recruits of the WBBL this year, leading the Sydney Thunder to a one-run victory in a final-ball nail-biter against her former club the Hobart Hurricanes at Hurstville Oval.

Knight scored 61 not out and took two wickets during Sunday morning's match, shading a stellar performance from Hurricanes star Rachel Priest, who left the field unbeaten on 83 from 64. 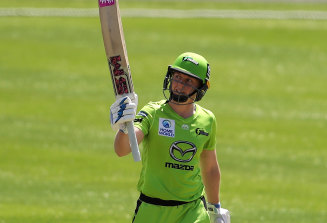 Heather Knight continued her rich vein of form on Sunday with another half-century for Sydney Thunder.Credit:Getty

"It was stepping away from us a bit there," Knight said. "You can start badly but finish really well … I'm really proud of the character the girls showed today."

The effort marked Knight's third-half century of the season.

Another to shine for the Thunder was 18-year-old Hannah Darlington, who was handed the bowling for the final over with Hobart needing 11 runs to take the win.

"She is a really mature kid and she knows the game really well," Knight said. "It was great for Hannah to hold her nerve there at the end."

Sunday morning's game came just less than 24 hours after a two-run defeat for the Thunder against the Melbourne Renegades on Saturday.

Next week will see the 2020 condensed WBBL season head into full swing, with the Thunder playing six games across nine days.

"It's a very quick turnover," Knight said. "There was a few slightly tired eyes this morning at 6.30 at breakfast, so you've got to move on quite quickly and reassess and that is going to be the way of the tournament.

Hurricanes all-rounder Hayley Matthews started the match by finding an early wicket of Rachel Trenaman, who was dismissed without a run on the board.

As a result, Tammy Beaumont was quickly joined in the middle by Sammy Jo Johnson before Nicola Carey produced a stellar run out of Beaumont, fielding her own bowling to take the Thunder to 3-59.

Fifteen-year-old leg-spinner Amy Smith managed to dismiss Thunder skipper Rachel Haynes for eight before taking the wicket of 17-year-old Phoebe Litchfield, who walked off the field shaking her head in anger at her own performance.

Knight continued to rack up some much-needed runs for the Thunder, pushing her side to 7-129 after the 20 overs.

Former Thunder player Priest was clearly eager to claim an early lead over her old team, putting 13 on the board from her first five balls.

The quick start saw Thunder fast-bowler Shabnim Ismail step up to the mark to restrict the fast runs, with Priest able to claim just one off Ismail's first over.

A partnership from Priest and Nicola Carey brought the Hurricanes on track to chase the 130 target.

It was here Knight decided it was time for the Thunder to drag themselves back into the game, dismissing Chloe Tyron for four with a brilliant catch before claiming the wicket of Hurricanes captain Corrine Hall.

Proving just like last year her brilliance in the face of a high-pressure situation, Darlington managed to take the wicket of Erica Kershaw with the first ball of the final over.

Darlington continued to hold her own even after a six from Priest, finishing the over with back-to-back yorkers to take the Thunder home by one run.

Run to the Rose: King’s Legacy might not have speed to match likes of Farnan and Rothfire