Mercy! The end of this Test series found English cricket returning to the same foetal position that we remember from the nineties, cowering on the ground as fists and boots flew in.

Meanwhile, Virat Kohli’s India have been correspondingly ruthless. If the mark of a good side is an ability to fight back from a shaky position, that is exactly what they did in Ahmedabad, with Rishabh Pant counter-punching like a chubby Adam Gilchrist. 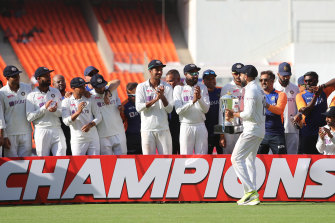 Virat Kohli and his teammates celebrate India’s victory in the fourth Test against England in Ahmedabad.Credit:Getty Images

The comparisons with peak-period Australia are inescapable. Whatever the rankings may say, India have inherited the Baggy Greens’ mantle as Test cricket’s apex predators. Kohli has an opportunity to establish the same sort of dominant dynasty that Steve Waugh did in the 1990s.

But Joe Root’s mind will be turning towards the return series, to be played this summer in very different conditions. At the presentation ceremony, you could almost see such thoughts popping up above his head like a cartoon bubble. “Yes, you may have monstered us on these raging turners, Virat. But how will you fare against Anderson, Broad and Woakes on a muggy morning at Trent Bridge?”

Historically, this is the only question India have yet to answer. The old suggestion that they were shy against pace has been exploded after winning their past two series Down Under.

But nibble and dart remain a problem. Weaned on finger-spin, Indian batsmen can read a ball’s revolutions with extraordinary accuracy. They are considerably less literate when the seam points upwards like a rudder. A year ago, India came to grief in New Zealand in a pair of low-scoring Tests. Tim Southee – a wily old swinger with a similar skillset to Anderson – took 14 wickets.

Admittedly, New Zealand’s batsmen also found the going tough. India are awash with pace and swing options, from the height and control of Ishant Sharma to Mohammed Siraj’s bustling skiddiness. And here lies the key to their recent transformation, for it was not long ago they travelled to England with help-yourself buffet bowler Ajit Agarkar coming on first change. 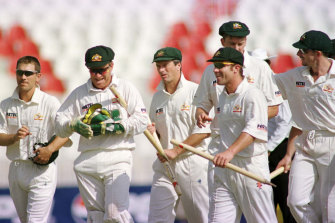 Steve Waugh and the Australian players walk off the field after defeating Pakistan at Rawalpindi stadium in 1998. Credit:AP

More work remains to be done, though. In New Zealand, no Indian batsman scored more than 102 runs in the series. “We made too much of the conditions,” said Kohli at the time. “If you’re not clear in your head, then the feet don’t move. You’re not quite sure whether to play the shot or not.” Had you transplanted those comments to Root’s mouth yesterday, they would have applied equally as well.

It is easy to forget, amid the emotional wreckage of Ahmedabad, that India’s record in England over the past – P14, W2, L11 – is comfortably the worst of any visiting team. Yes, most young English batsmen seem to find spinning pitches as alien as the rings of Saturn. But we are so familiar with our own juicy conditions that we forget how daunting they can be when the ball starts swinging around corners.

Equally, India might have lost only one Test series at home in their past 26, but England can almost match that record, having lost only two in their past 24. So while the winter might have ended in disappointingly one-sided fashion, the summer is nicely set up.

India will open a challenging campaign at Lord’s in June in the World Test Championship final against New Zealand. Their four Tests against England begin seven weeks later.

Should India prosper on both fronts, they can rightfully be declared lords of all they survey.

Mums Tipple back to winning ways at Wolverhampton