Marnus Labuschagne admits a tendency to dispute the umpire’s decision in domestic cricket was hurting his reputation, and has made a concerted effort to remonstrate less on his way to a more senior place in the Australian side.

Having joined Doug Walters and Greg Chappell as the only three Australians to make a double century and a century in the same Test match, Labuschagne will again be the batting linchpin for the hosts in the day/night Test in Adelaide. 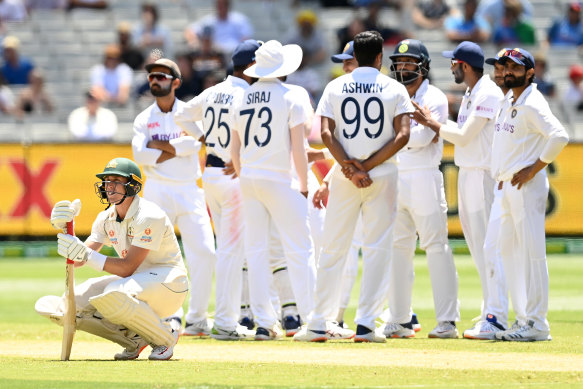 As a livewire top order batter for Australia and Queensland after making a spot in the Test team his own during the 2019 Ashes tour, Labuschagne has spoken frankly of his struggles to adapt back to the realities of Shield or county cricket where he did not have recourse to DRS after lbw decisions.

While on one level they were away from the bright lights and many cameras of the international circuit, streamed videos and highlights of Shield games where Labuschagne took a long time to walk off the field or visibly questioned decisions have contributed to the mixed public perception of a player with deep respect for the game.

“It’s definitely been something I’ve needed to work on, because my passion sometimes gets misconstrued as being disrespectful and rude, and that’s certainly not something I’m trying to be,” Labuschagne told The Age and The Sydney Morning Herald.

“But the reality is that not everyone sees it that way, so I need to make sure that I’m setting a good example for the next generation coming through and playing, young kids, making sure that they respect the umpire’s decision regardless of whether you think it’s right or wrong.”

Always happy to talk in depth about his thought processes and technical details, Labuschagne described the change in mindset between having 15 seconds to consider the need for a DRS referral and the instant feeling of being “fired” in the Shield.

“I think it’s really hard when you come back from Test cricket where you can be a little more thoughtful and you don’t need to show any dissent because you’ve got DRS, so you kind of take a step back and go ‘what do I think, does that feel out, where did that hit me’,” he said. “Unfortunately when you’re playing Shield, you don’t have that luxury.

“Most times when I get out I’m like ‘nah I’m not out, I’m not out’ and then with the DRS you’ve got 15 seconds to actually think it through – ‘OK, where did that hit me, back pad, do I think it’s outside the line’. And then you’ve got feedback from the guy at the other end. So there’s a lot of things there that you go through.

“You almost don’t react because you know that you’ve got that 15 seconds, so let’s just try and get the decision right, should I review it or should I not. So that’s when you go back to Shield cricket and all of a sudden you get hit on the pads and you’re given out, and before you’ve even had time to think about it, you’re reacting to the situation because the decision’s already been made.“

As much as it can be difficult for batters to get out of their bubble in the split second when an innings is summarily ended, Labuschagne said it was important to recognise the wider implications of those instant reactions.

“I certainly want to make sure that when I’m given out that you’re walking off and you’re not showing dissent, respecting the game and making sure you’re a good role model,” he said.

Steve Smith, another player who has at times had trouble moderating his on-field reactions to umpires and occasionally teammates, said that there was an adjustment required between having DRS and not.

“You get hit on the pad and you’re like ‘geez, I might be a chance of not being out here’ but you just have to walk off, don’t you, it’s the umpire’s decision,” he said. “Maybe it takes a little bit [of adjusting], I haven’t really done it a lot for a while, so the odd game you go back [to Tests] it might actually take a second to click in that you might have a second chance by putting your hands up.”

Perspective is also more easily found during the first season of more regular home touring for the Australian side. Labuschagne has travelled with his wife Rebekah and their daughter Hallie between Brisbane, Perth and Adelaide, affording the 28-year-old some time to think about things a world away from batting.

“It certainly makes it feel more normal,” he said. “It’s just so much nicer to have that freedom with your families around and just everything that encapsulates the Test summer. It feels like we’re back to an old school Test summer, which is exciting.”

Gytrash relishing life at the Farm