Not for the first time, an Australian team overseas found its most balanced XI on slow, spinning surfaces at the very end of the trip.

Adam Zampa, the recalled Ashton Agar, and the decidedly handy Ashton Turner returned collective figures of 5-83 from 28 overs to confound the West Indies in the final ODI in Barbados. 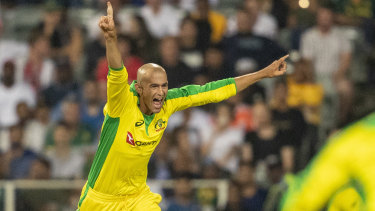 Spinner Ashton Agar played a key role in the series-clinching win over the West Indies.Credit:AP

They were the perfect complement to the speed and experience of Mitchell Starc (3-43) and the fit-again Josh Hazlewood (2-18), combining to roll Kieron Pollard’s men for 152 and set up a comprehensive victory to seal a series that is part of the qualifying campaign for the 2023 World Cup in India.

If there was consolation in the late recognition of the Zampa, Agar and Turner trio, it came through the fact that they can all expect to be heavily-utilised during the Twenty20 series against Bangladesh that follows this one, after the Australians take a direct charter flight from Barbados to Dhaka.

They are travelling without captain Aaron Finch, who left the tour this week in order to have a knee problem assessed, and perhaps operated upon, in time to have him available for the T20 World Cup in the UAE later in the year. 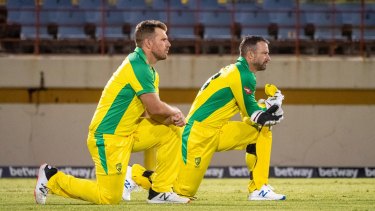 Australia might have been able to sweep the series 3-0 had they employed more than Zampa and Turner when defending a tally of 187 in the second game: apart from Starc, the pace bowlers usually preferred by the Australian selectors were ineffectual.

It was unclear at exactly what point Agar, who suffered a hamstring strain earlier in the tour, had returned to availability. But his return brought an intelligent teasing spell that made the most of an extremely dry, used pitch and reaped 2-31, his best ever ODI innings figures.

Zampa, meanwhile, maintained his excellent rhythm, spinning the ball both ways and threatening the stumps more often than not on the way to 2-29. Turner’s off-breaks, seldom used since he suffered from a litany of shoulder issues, proved to be more than capable of providing a foil for his specialist spinner counterparts.

The match was into its fourth over when Evin Lewis edged an attempted hook shot at Hazlewood into his helmet and was required to temporarily retire hurt for further concussion tests. Hazlewood struck again, this time in the wickets column, when he cramped Shimron Hetmyer into dragging onto the stumps.

Agar was on to bowl the seventh over, and after settling into his spell claimed the critical wicket of Shai Hope when flight and spin drew an outside edge well held by Mitchell Marsh diving in from backward point.

In the next over Nicholas Pooran shouldered arms to what he thought was a Turner off-break, only to grimace as the ball skidded through straight into the off-stump.

From there the innings was very much a struggle, prolonged largely through Lewis’ return for a doughty, unbeaten innings of 55.

Promoted to open after Ben McDermott’s ankle injury, Henriques lasted only four balls to conclude an underwhelming Caribbean trip, in which he missed an opportunity to make even one significant score as one of the senior selected players.

Stand-in captain Carey (35), promoting himself to no.3, Marsh (29), Wade (51 not out) and Agar (19 not out) all contributed cameos, enough for the Australians to finish 2-1 series victors with all of 19.3 overs to spare. Balance and match-ups were sound here too, as the touring left-handers prospered against balls spinning into them.