Home » Sports News » Lyon all at sea as Root, Malan set the scene for England fightback

Australian spinner Nathan Lyon remains stranded on 399 Test wickets as a defiant England rose to the challenge at last in Brisbane to frustrate the home side and put themselves back in the contest on the third day of the Ashes opener.

With a 278-run lead safely in Australia’s keeping as England began their second innings on Friday, the optimists among the local contingent may have wondered whether it could all be over before the weekend, especially with the frailty of England’s first-innings effort of 147 fresh in their minds.

But on a flattening wicket and against a touring top order that had clearly made some adjustments to their technique and decision-making, it was Dawid Malan (80 not out) and Joe Root (86 not out) who stood tall against the vaunted pace attack and Lyon, who struggled to elicit so much as the occasional shout through his fruitless 23-over spell.

At stumps, England were 2-220 and trailed by just 58 runs. And there was an injury concern around key quick Josh Hazlewood, who didn’t bowl in the final session and only produced eight overs (0-13) for the day.

Lyon ended up with figures of 0-69 and had ample opportunity to do the job for his captain Pat Cummins, although the rookie skipper didn’t always provide him with the kind of attacking fields that might have helped prise an elusive wicket.

But his effectiveness may now come into question if he can’t be a factor on Saturday as England try to establish the kind of lead that could make things difficult for an Australian side who lost here against India in January, a defeat that punctured the reputation of the ground as a fortress. 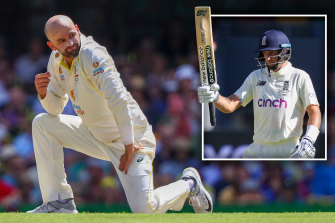 Nathan Lyon had another fruitless day with the ball as Joe Root led an England fightback.Credit:AP

With Hazlewood out of the rotation, Starc (1-60), Cummins (1-43) and Green (0-12) were left to try and find a way through the stout defence of Malan and Root, who made another 50 in Australia and could well be on his way to a maiden Ashes century on these shores.

The top-rated Test batsman in the world would move past Michael Vaughan’s 2002 mark of 1481 runs in a calendar year and would dearly love to post a monster total in a series he believes will define his captaincy.

Rory Burns has already secured his place in Ashes history for all the wrong reasons after he danced around a Mitchell Starc yorker to be out for a famous first ball duck on Wednesday. He had more reason than most to be slightly terrified of what might transpire when he padded up again.

This time, it was Haseeb Hameed who faced the opening salvo from Starc with Burns hoping for the best at the other end. But he couldn’t escape an almighty scare when he was given out LBW on the final ball of Starc’s first over without a score to his name.

He was quick to signal for a review and seemed confident enough he had avoided the misery of a pair at the Gabba. Replays showed him to be correct as the ball sailed fractionally over the bails, even if he could only make it to 13 before Cummins had him top-edging to Alex Carey.

Hameed made his way to 27 and his departure saw Root join Malan at the crease with England at 2-61. It was Australia’s last piece of celebration for the rest of the day as the pair settled in for the fight, fending off Lyon throughout as he failed to find the breakthrough to give him his milestone wicket.

The ruthless line and length bowling of day one, albeit conducted on a more receptive surface, failed to materialise on day three. Without Hazlewood in the final hours, England looked in complete control of proceedings as they embarked on an admirable return of serve after a difficult opening few days.

Should they be able to go on with things on Saturday, with wickets up their sleeve and rapid scorers like Ben Stokes and Jos Buttler at their disposal, the concluding stages could be far more intrigue than most had predicted after their first innings flop.

Malan had some good fortune when Australia went up as one after they heard a nick off Cummins when he was on 16. Steve Smith, the vice captain, was adamant it should be reviewed and Cummins obliged by sending it to the third umpire.

But with more technical issues hounding officials, this time a lack of RTS – snicko – to pair with the hot-spot camera, there was no evidence to overturn the decision as Malan continued to defy the Australians for the remainder of play.