Nathan Lyon's red-letter summer is set to hit an early snag with selectors expected to overlook the champion spinner for the limited-overs matches against India, a move that could have ramifications for his Test preparation.

Selectors will on Thursday announce an 18-man squad for the three one-day internationals and three Twenty20s against India – which is unlikely to feature the country's greatest finger-spinner. 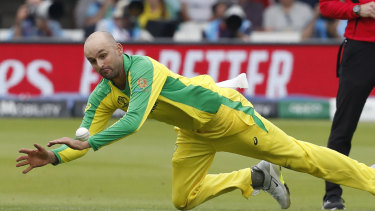 Nathan Lyon has not played a limited-overs international since last year’s World Cup.Credit:AP

Though a fixture in the Test side, Lyon has played just 29 ODIs and two T20s, last wearing the green and gold during the 2019 World Cup.

Should Lyon miss as expected, he risks heading into what Cricket Australia chairman Earl Eddings described as the "world heavyweight championship of Test cricket" without a high-level hit-out in five weeks.

Lyon could feature for Australia A against India A, though selectors may be wary of giving the visitors a sighter of the spin great, who is set to play a key role in the home side's quest to regain the Border-Gavaskar Trophy.

Not playing in any of the three-day games, at Drummoyne Oval (December 6-8) and under lights at the SCG (December 11-13), is not palatable either.

Lyon may need to play at grade level to keep match-fit, with the Sheffield Shield going into hiatus after November 11 to give players time away from hub life leading into the Big Bash League.

He was part of Australia's 21-man squad to tour England but did not play a game as Aaron Finch's side upset the world champions 2-1 in the ODI series and were beaten in the T20 leg of the tour by the same scoreline.

There are unlikely to be wholesale changes to the Australian squad after their strong showing in the UK against one of the best limited-overs teams in the world, though Mitchell Marsh is in doubt due to injury.

Marsh is still wearing a moon boot as he recovers from an ankle injury sustained while bowling in the Indian Premier League just over five weeks ago. The West Australian is due to have his injury assessed again next week.

While Marcus Stoinis is in the box seat to replace Marsh as the No.1 white-ball all-rounder, there could be room for rising star Cameron Green to be picked in his first senior national squad.

The highly rated Green left several state insiders in awe with his powers of concentration in his epic knock of 197 by blunting a strong NSW attack across three days and facing 438 balls.

He is due to resume bowling in the next round of the Shield after overcoming stress fractures in his back.

Selectors were able to take three wicketkeepers to the UK but the smaller squad means either Matthew Wade or Josh Philippe is likely to be left out. Wade was given the nod ahead of the Sydney Sixers gloveman when selectors dropped Alex Carey from the T20 side last month.