Three-year-olds have often generated controversy over their place in the Cox Plate field, but all agree that they add to the intrigue and interest in Australia's greatest weight-for-age contest.

This year is no different, with the three-year-old colt Grandslam exciting plenty of debate when he was given a spot in the select 14-horse field at the expense of the Lloyd Williams-owned Buckhurst, trained in Ireland by Joseph O'Brien.

In the end, the arguments proved merely academic as Magic Wand's scratching meant that Buckhurst got his place in the field anyway alongside Grandslam, a full brother to the Caulfield Cup winning mare Jameka. 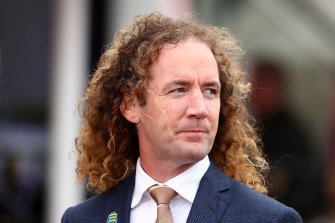 Not that the sound and fury bothered Grandslam's trainer, Ciaron Maher, who believes that his colt, a good third in the group 1 Caulfield Guineas last time out, deserved his place in the field on merit anyway.

He pointed out that plenty of Guineas placegetters – including, famously, the maiden Shamus Award who led all the way to take out the 2013 Cox Plate – had been given a start.

Grandslam might have started at long odds for the Guineas – he went off at $61 – but gave a bold sight under rider John Allen, leading to the 100-metre mark before winner Ole Kirk and runner-up Aysar swept past.

Maher, who also trained Jameka, said the parallels between the brother and sister were close.

"If you have a look at what she did up to the same age, she had won one race [like Grandslam] and had finished second in the Thousand Guineas and then went to the Vase on Cox Plate Day," he said.

"He has won one race and finished third in a Guineas. It's really uncanny.

"She won the Vase and then the Oaks. She narrowly missed out in the Guineas and I always told the owners that if she had won the Guineas I would take her to the Cox Plate.

"But his horse is a bit different, he's a colt and, as he is already group 1-placed, the Vase doesn't do much for him."

Hence the throw at the stumps in the Cox Plate, in which he will carry only 49.5 kilos with in-form rider Jye McNeil aboard.

"Knowing the family and the preparation he has had I think he is still improving out of the Guineas and I think he will be better at 2000m," he said.

"In recent times has there been a three-year-old that's gone into the field that hasn't had conjecture around them?

"Shamus Award there was uproar but he came out and won. No one said much after the race. If you take a line through him and his Guineas placing hopefully Grandslam can do the same."