England’s reign at the top of the T20 rankings lasted a little over 48 hours as Australia won the third and final match in Southampton – though not before they threatened to repeat their first-game meltdown.

After going top of the world on Sunday evening, England had visions of a 3-0 whitewash that would have allowed them to begin the one-day series on Friday in Manchester with a spring in their step.

Instead, a batting line-up without Jos Buttler and Eoin Morgan made a faltering 145 for six, before the Australians recovered from a mid-innings wobble against Adil Rashid to win with five wickets and three balls to spare. 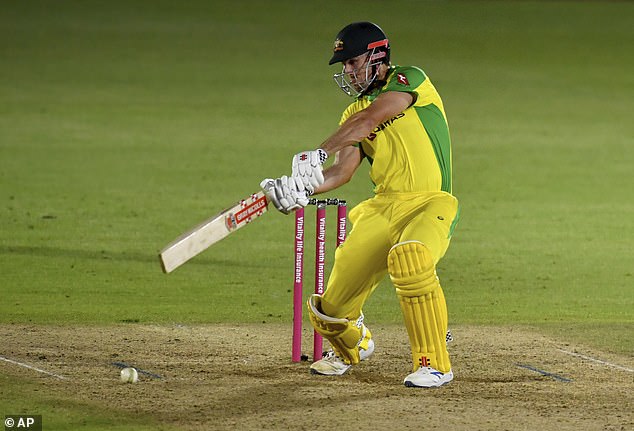 Had England’s fielding been up to the mark, they might have forced victory on a pitch losing life after being used for the third game in a row.

But Jonny Bairstow put down a skyer from Aaron Finch, despite being armed with the gloves, and Dawid Malan dropped Mitchell Marsh at slip off the leg-spin of Joe Denly.

That second drop proved crucial. Picked for the first time in the series, Marsh had walked out at 87 for four after Rashid removed Glenn Maxwell, who fluffed a reverse sweep, and Finch, defeated by a gorgeous googly, in the same over.

And it was 100 for five when Rashid snaffled Steve Smith for three, collecting a return catch off the leading edge from the final ball of his four-over spell. 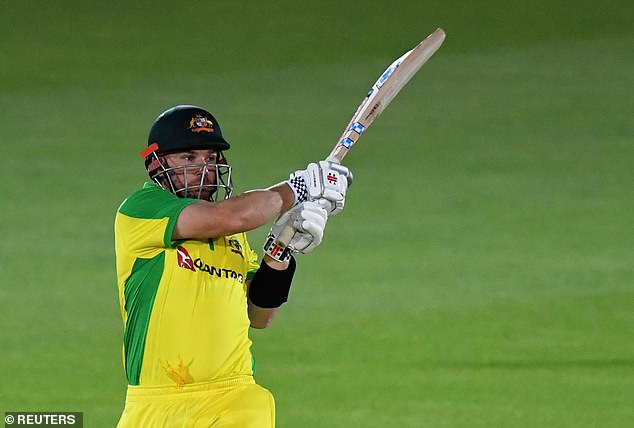 At that point, the tourists were heading for a carbon copy of Friday’s series opener, when they messed up a simple chase. But Marsh eased nerves by pulling Mark Wood for six, and Australia were soon back on top of the rankings. Whether they will still be there come the T20 World Cup in India next year is another matter.

It was a funny kind of top-of-the-table clash. England were without their captain and vice-captain, not to mention Jason Roy and Ben Stokes, while Australia left out David Warner, wicketkeeper Alex Carey and fast bowler Pat Cummins.

For Moeen Ali, it was a sobering introduction to international captaincy. He had already taken charge in the field because of another injury to Morgan when Ireland chased down 329 here last month. Now, it was his misfortune to lead a team that were too sloppy, too often.

Asked if fielding had cost England the game, he replied: ‘Definitely. Even with a low score like that, I thought if we take those chances, as we saw in the first game, if you put Australia under pressure, they do crumble. I felt like they were doing that again tonight. If we had held those chances, we would have won the game for sure. 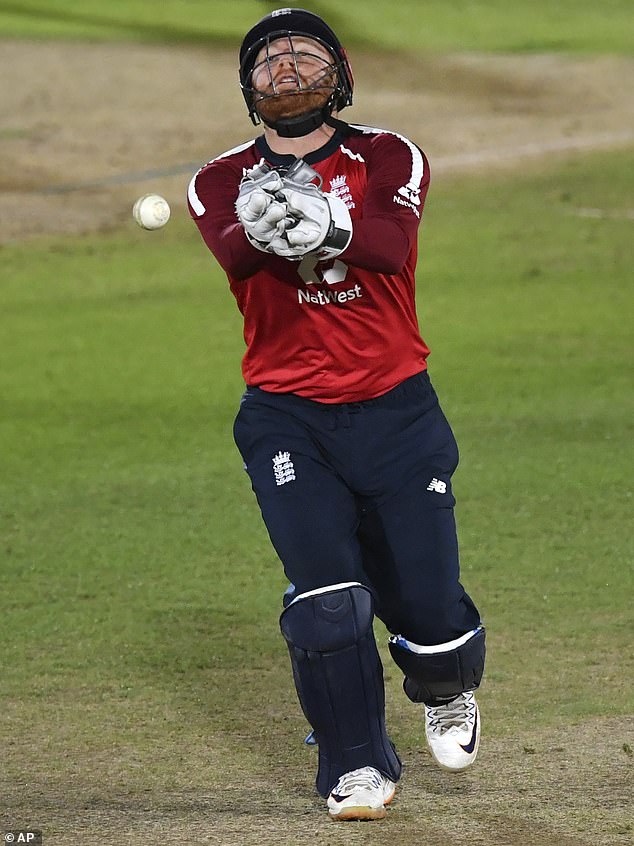 ‘The incentives were there to be No 1 in there world, but it was probably a lack of intensity. We have to put that right if we want to win the World Cup.’

Earlier, England never got going, despite a gritty half-century from Bairstow and a late flurry from Denly, whose previous international appearance was the first Test against West Indies two months ago.

It didn’t take a nuclear physicist to work out what they were missing – specifically, the runs and presence of both Morgan, who was nursing a finger injury (but hopes to be back for the one-dayers) and Buttler, who was spending some much-needed time with his family. 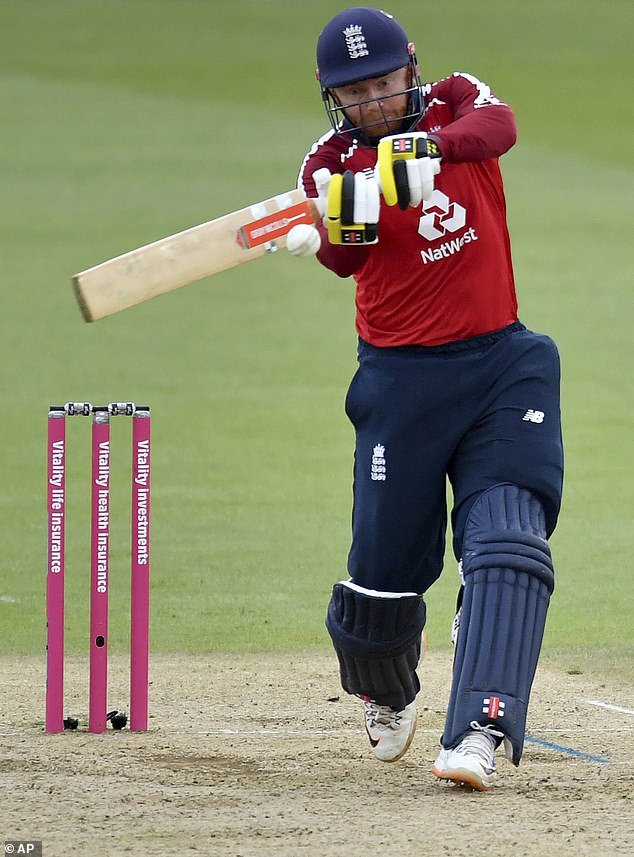 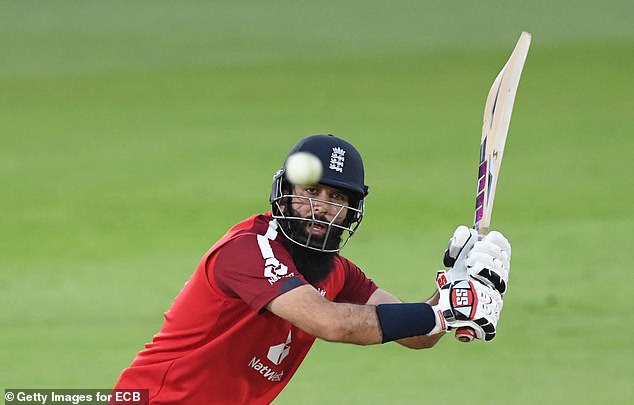 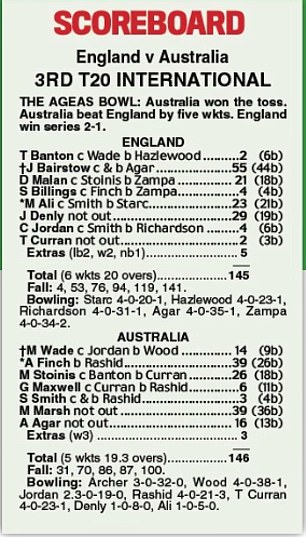 Given a chance to open for the first time in the series, Tom Banton was caught behind off Josh Hazlewood for two, his third single-figure score in a row. If that was an anticlimax after his fireworks against Pakistan, England have seen enough to recognise his potential on India’s spin-friendly pitches next year.

Malan made 21 before heaving leg-spinner Adam Zampa’s first ball to deep midwicket – a score that almost counted as a failure for a batsman who had elbowed his way to the top of the list of all-time T20 averages.

Sam Billings came and went in a hurry, reverse-sweeping Zampa to an alert Finch at slip, and England were grateful for Bairstow’s return to form. He struggled at first, taking 16 balls over his first nine, before hoicking a free hit off Hazlewood for four.

Soon he was bringing up a restorative 41-ball fifty, and the only disappointment for England was that he could get no further than 55, miscuing a pull off Ashton Agar, who sprinted towards midwicket to cling on off his own bowling.

Ali made 23, while Denly took a trio of edgy fours off three slower balls from Kane Richardson. But it all felt as if England were feeding off scraps tossed from high table, with Mitchell Starc and Hazlewood taking two for 42 off eight overs between them. It summed up Australia’s edge on the night.