The COVID-ravaged Melbourne Stars could be on the verge of breaking point after captain Glenn Maxwell returned a positive rapid antigen test after the local derby against the Renegades on Monday night at the MCG.

Maxwell has since undergone a polymerase chain reaction (PCR) test and is currently isolating as he awaits the result. 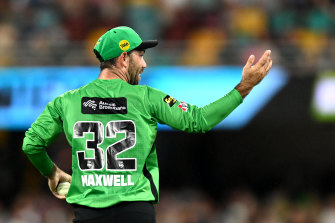 If the Twenty20 World Cup winner does return a positive PCR test, the Stars’ group of unavailable squad member would balloon to a massive 13.

The likes of Marcus Stoinis, Adam Zampa, Nathan Coulter-Nile, Joe Burns, Joe Clarke and Beau Webster are all isolating after testing positive in the last week, forcing the Stars to field badly depleted sides in their last two games against the Scorchers and Renegades, losing by 50 runs and five wickets respectively.

Seven Stars – Stoinis, Zampa, Coulter-Nile, Burns, Webster, Sam Rainbird and Nick Larkin – were due to finish their seven-day isolation period later this week, but there’s still no guarantee any of them will produce negative tests and be available to take on the Strikers. It’s believed the players will only need to produce a couple of negative rapid tests to be available for Adelaide.

A source who is close to the situation told The Age that the other concern for the Stars was that even if all seven players were negative by Friday, there would be a question mark over match fitness given they have spent an entire week in their hotel rooms isolating.

Having as many as 13 players unavailable might be the tipping point for CA to cut the Stars some slack and postpone the game.

So dire is the Stars’ predicament that they had an unlikely ally in the form of Kane Richardson, fast bowler for cross-town rivals the Renegades.

“I feel for the club because if we’re in that position with 12 blokes out I don’t know how we’d put a team on the park,” Richardson said following Monday’s derby.

“When is enough enough? At what point do you say there’s too many out?”

The Stars have been forced to call in eight top-up players to their squad to cover their losses, and even one of those players, Tom Rogers, who made an impressive debut against Perth, tested positive and became unavailable for the Renegades clash.