‘Brendon McCullum is such a great man-manager… I’m very jealous of the Test players!’: White-ball skipper Eoin Morgan talks to Sportsmail about England’s new coach, his own future and potential successors 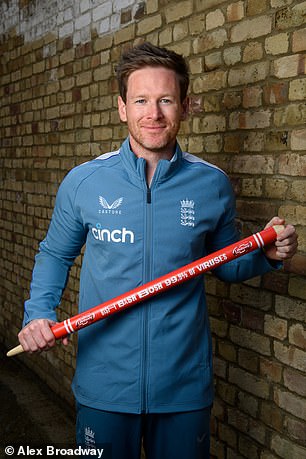 Eoin Morgan, fit and relaxed at the start of what could be his final summer in charge of the England white-ball teams he revolutionised, has no doubts about the impact his great friend will make on English cricket.

‘It’s unbelievably exciting,’ says Morgan of the appointment of Brendon McCullum as England Test coach. ‘In many ways I’m jealous of the Test players because, having played both with him and under him, I know what a great man-manager Baz is.

‘The best head coaches have this ability to lighten things up and reiterate what direction you’re going in, what your purpose is.

‘It’s a brilliant appointment and it says not only a huge amount about English Test cricket but Test cricket in general. We need to be competitive for it to flourish.’

Morgan is sitting pitch-side at Loftus Road, home of Queens Park Rangers, where he has been filming a content shoot for Lifebuoy alongside ex-footballers Clinton Morrison and Dean Ashton and lifelong QPR supporter and Hampshire captain James Vince.

Morgan — ‘I was a Man United fan as a kid because of Roy Keane but I’ve fallen away a bit since then’ — is clearly in a good place as he talks to Sportsmail about his own future, his potential successors as white-ball captain and the back seat he will take for much of this summer to allow England to plan for life after him.

But first he wants to talk about the master of ceremonies at his wedding and the man who provided his inspiration in 2015 for the transformation of England’s white-ball cricket.

‘The thing Brendon brought as a player and a leader is that carefree attitude, that very positive way in which he played, and he was able to transmit that across all three formats,’ says Morgan.

‘He changed how Test cricket was looked at in New Zealand, which is incredible given their lack of resources. 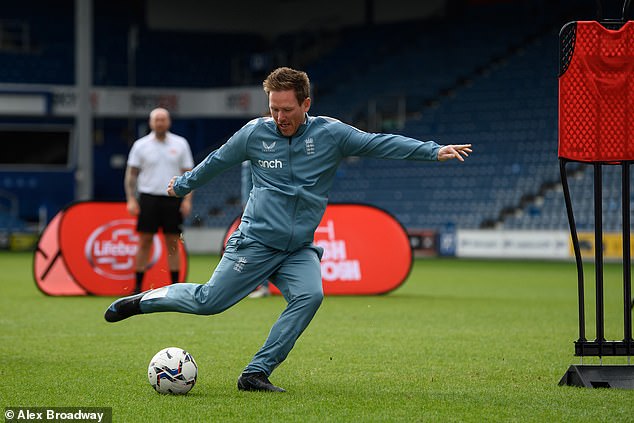 ‘He’s a brilliant mentor and being a head coach at one of the biggest IPL franchises (Kolkata Knight Riders) comes with big pressure. To get to the final in his second year was a great achievement.

‘Baz will bring huge amounts of confidence to England and absolute clarity in the direction he wants people to go. Above all he’ll bring a great deal of enjoyment.’

When Sportsmail revealed McCullum was on England’s radar there was an assumption he would link up with Morgan as white-ball coach. But, the captain confirmed, that was never on the table. Instead he will join forces with Australian Matthew Mott.

‘The relationships between the captain, senior players and coach are key so I was asked what type of coach I thought we needed,’ says Morgan. ‘Matthew’s been around a long time and the success he’s had with Australia women has shown he can galvanise a team and control the weight of expectation when you’re expected to win every game.

‘To be real about this, players do the majority of the work but it’s important coaches are leaders and hold the team accountable. The level we set is already evident. We have massive expectations to win things and Motty can help that along but ultimately players need to want to drive that forward.

‘As a cricket fan winning is not the be all and end all to me. I want to support a team who go out and play in a certain way and regardless of the format represent something I’ll enjoy watching. 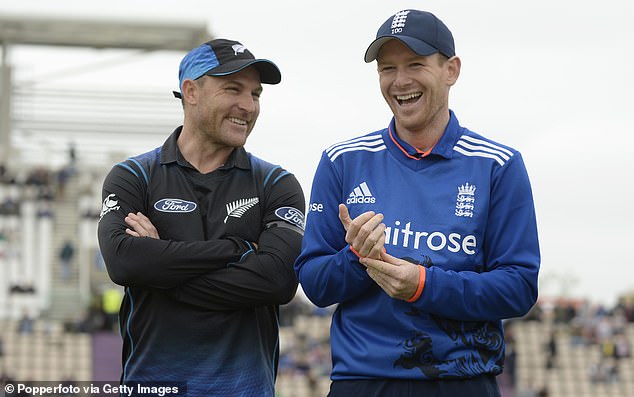 ‘I can deal with losing or drawing as long as people go out and give it absolutely everything. At certain times as a player you can be criticised for that, but with the two coaches who have been brought in you will see that in abundance.’

When Rob Key, the new managing director, announced the appointment of Mott he said it was important England did not take their eye off the all-conquering white-ball team in their desire to improve the Test side. Morgan has no intention of allowing complacency to creep in as he approaches, in Australia this autumn, his last chance to add a T20 World Cup as captain to the 50-over title won so dramatically at Lord’s in 2019.

‘I can recall vividly what happened in 2015 and I know how long our journey has been to get to where we are now,’ he says. ‘So we don’t want to lose that momentum or the levels of success we’ve had. We want to harness that and drive things forward.

‘Yes, the worry is it can all get neglected now but most of the guys are chomping at the bit to be successful as white-ball cricketers in their own right and that’s great to see.’

Morgan smiles when he considers the stated need for England’s Test side, with just one win in their last 17 matches, to now take precedence in English cricket because of the runaway success of the white-ball juggernaut he created.

‘It does make me laugh because, for as long as I’ve played, red-ball has always been the priority, certainly in English cricket,’ says Morgan. ‘It’s always been paramount and part of me taking this role on in the first place was understanding, yes, you’re going to be held accountable for performances as captain but you’re not always going to have your best team. But you will be able to build towards a World Cup.

‘That gives you more opportunities and breathing space as a captain or coach as opposed to Test cricket when the level of expectation is on every game and every series. It can be done but it’s more difficult to do.’ 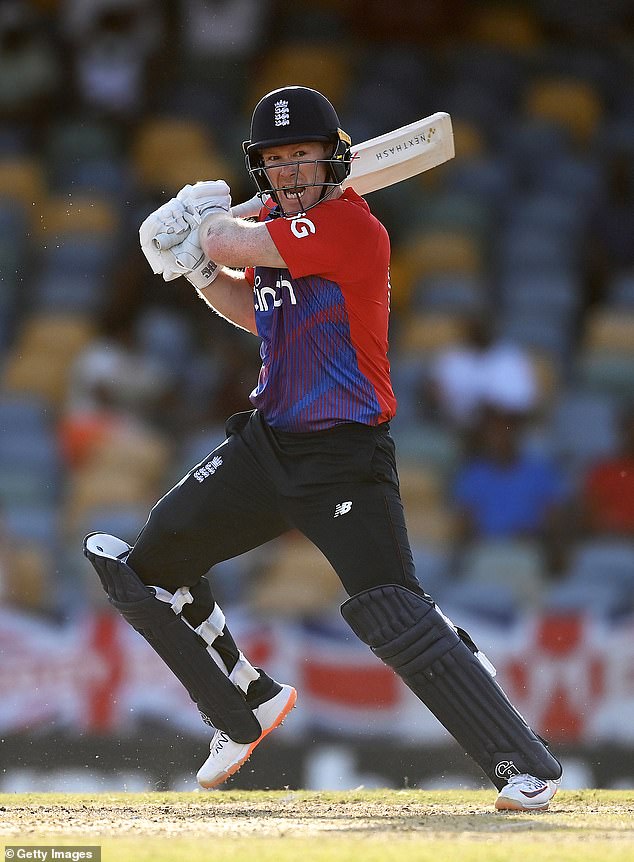 Now come the closing chapters in the astonishing success story of Morgan as England white-ball captain. And he dropped a strong hint that it will all come to an end after that T20 World Cup in November, whether England win or lose.

‘I’m always looking at my future,’ admits the 35-year-old. ‘I’m very honest about where the team need to go but if at any stage I haven’t got the drive or don’t think I’m contributing enough I’ll be up front about it. The 50-over World Cup next year is a long way away so I can’t comment on that now. The goal is the T20 World Cup.’

It has long been assumed Jos Buttler will step up as captain when that time comes, but intriguingly, Morgan insisted that is not a certainty.

‘If you had asked me two years ago I would have said yes (to Buttler being a shoo-in as captain) but equally guys like Moeen Ali and Chris Jordan have been very strong leaders,’ he says. ‘I haven’t mentioned Ben Stokes because I think he should solely focus on his big job at hand, but we do have a number of candidates.’ 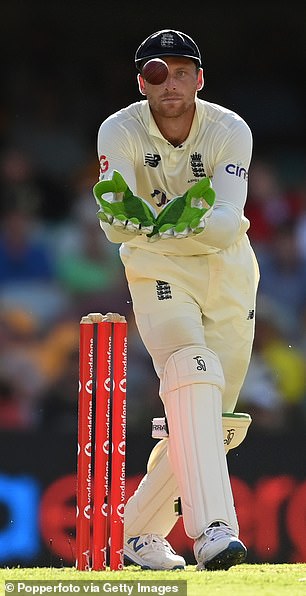 The speculation will only grow because Morgan, on form alone, is not guaranteed his place in a side brimming with talent — even though Key says he is worth including as captain alone. He is without a T20 half-century for almost two years and ended his most recent assignment, in Barbados earlier this year, sidelined with a thigh injury.

‘Not a concern,’ he says of his decreasing numbers. ‘I’ve been in and out of form my whole career and the biggest thing for me at this age is making sure I’ve got the drive and I do have that. There’s no concern at any waning of my powers.

‘But you will see me take different roles on throughout the summer to present opportunity to others and groom some of the guys coming through. I won’t necessarily be giving myself the best chance to go out and regain form but I’m happy with that. It’s part of developing things beyond myself.’

Key has said he could see Morgan going straight from playing to coaching at the highest level. ‘Coaching is something that interests me more now the roles have been split,’ agrees Morgan.

‘I’ll be looking at other things, too. I’m doing some punditry with Sky this year and I’m taking a post-graduate diploma in strategic leadership and governance with the University of Liverpool. I’m trying to branch out as much as I can but I’d love to stay in the game when I do retire.’

This summer, it seems, will largely be one of white-ball experimentation. ‘The India T20s will be a great gauge of where we’re at but the rest of the summer will be a delve into the depth of what we have in county cricket considering the injuries we have with bowlers,’ says Morgan.

‘It’s not a bad time to do it. It’s harder to look at people when you have your strongest team available. Hopefully we can get to the end of the summer with the majority of our bowlers fit and we head for Australia with as close to our best squad as possible.’ 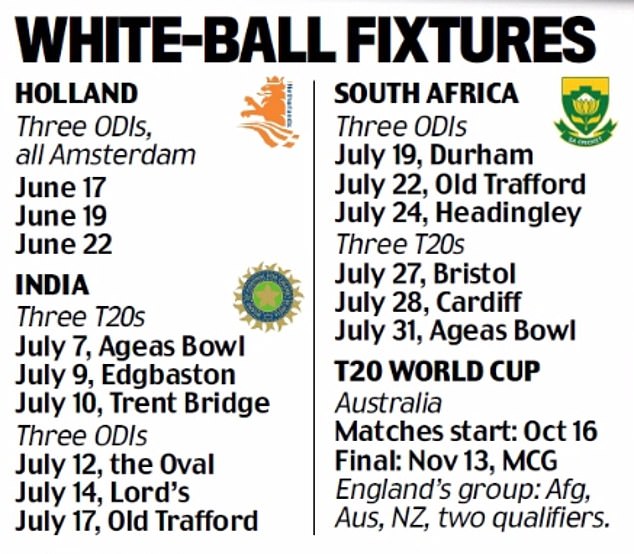 The absentees will include new Test captain Stokes. ‘Ben won’t play white-ball this summer,’ confirms Morgan. ‘We just want him to go off and be himself as Test captain as it’s a huge responsibility. I don’t want Ben this summer, I want him in November. That’s when our race will be run.’

Whether one key player is on the plane to Australia remains to be seen because Jofra Archer, cruelly, has been ruled out for at least the summer with a stress fracture of the back — worryingly prevalent among English bowlers.

‘Jofra is hard to take,’ admits Morgan. ‘His dedication and discipline throughout his rehabilitation have been unbelievable. So to be dealt this hand is horrible for him.

‘Everybody is around to support him and everybody knows he will come through this but right now it’s very difficult. He’s just been incredibly unlucky. I hope he’s still a chance for the World Cup.’

It is, then, all about this year’s World Cup. ‘I’ve been involved in one T20 World Cup victory (as a player in 2010) and it’s special,’ says Morgan. ‘I believe we have a squad, provided certain people are fit, to go to Australia and win. That’s what our expectation is.

‘It would be amazing to do it, certainly after having 50-over success in 2019. We did a lot of things right in the last T20 World Cup but were ultimately beaten by the better side (New Zealand in the semi-finals) so we need to do certain things better at the back end of the tournament.’

It would be the perfect finale for Morgan. ‘It’s a huge motivation,’ he adds. ‘Enjoying the process of getting to the closing stages of tournaments is one of the strongest attributes our players have and I’m no different.

‘I enjoy talking about playing in finals and accepting at times we haven’t been good enough. It’s been a nice place to be and hopefully it will all go well this time.’

Eoin Morgan was speaking at the filming of a content series for Lifebuoy, official hygiene partner of England cricket. To watch England cricketers and EFL footballers take on a number of skills challenges, follow @LifebuoyUK on Twitter.