Merv Hughes, the former Australian fast bowler and one of the sport’s great larrikins, has been inducted into the Australian cricket Hall of Fame. 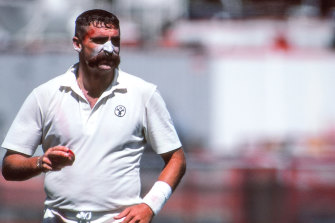 His career-best figures of 8-87 came against the West Indies at the WACA in 1988, including the final wicket of a hat-trick spread across three separate overs, two innings and two different days. Hughes’ ability to deliver when the contest was at its fiercest was never in question, and his match figures of 13-217 in that match were even more notable considering fellow quick Geoff Lawson had his jaw broken while batting and was unable to return to the field.

Hughes made his name initially for club side Footscray before earning selection in the Victorian side in the late 1970s. His willingness to bowl long spells was a hallmark of his career, and this continued even through the winning 1993 Ashes tour when he played with an injured knee.

He was a cult figure off the field, his quit wit, dressingroom antics and bristling handlebar moustache ensuring he was a fan favourite – and a beloved “pest” to his teammates.

There was no better sight when Hughes was in his pomp than a heaving Bay 13 at the MCG imitating his warm-up stretches in between overs.

In retirement, Hughes continued to wield an influence, and was a national selector between 2006 and 2010.

Cricket Australia chairman Earl Eddings said Hughes “was one of the greatest bowlers to have played our national game”.

“He gave everything he had to try and help his team to win, coupled with his enthusiastic theatrics on the pitch and his love for the game. He will always be warmly remembered as the big-hearted fast bowler and larrikin who demolished batting line ups all over the world,” Eddings said.

Hughes joins Johnny Mullagh, the best player of the 1868 Aboriginal team that became the first sporting team from Australia to tour internationally, as a Hall of Fame inductee this year. A third inductee will also be honored at the Australian Cricket Awards, a virtual event to be held on Saturday before the Big Bash League final.