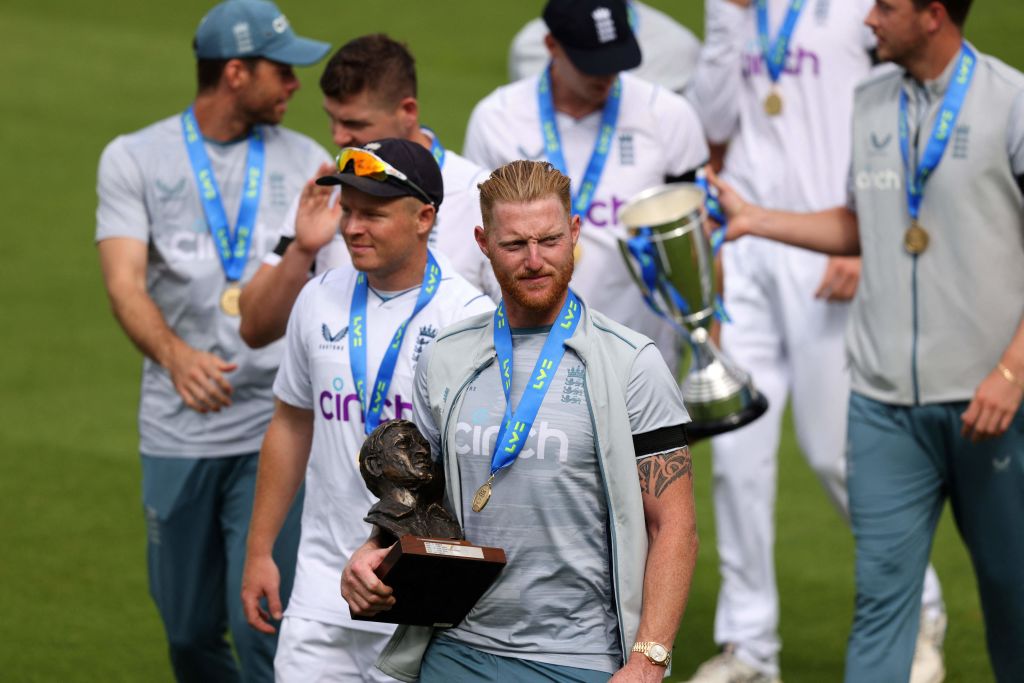 Michael Vaughan has backed England to overcome Australia and regain the Ashes next summer after they secured an impressive series win over South Africa.

Ben Stokes’ side smashed South Africa by nine wickets in the deciding Test at The Oval to complete an impressive comeback following a crushing defeat in the series opener.

The victory gave Stokes and Brendon McCullum a sixth win from seven Tests in their first summer in charge of the side.

England had only won one of their previous 17 Tests before the appointment of Stokes as Test captain and McCullum as head coach, suffering a 4-0 Ashes defeat in Australia last winter.

Australia will bid to retain the Ashes on these shores next summer and Vaughan believes Stokes’ England have what it takes to take back the urn.

‘In the space of seven Test matches England have sent a message to me and to many others,’ former captain Vaughan told the Daily Telegraph.

‘At the start of April, if you had said they had a chance to win back the Ashes next year we would have said there was no way they could do it.

‘But, on the back of a remarkable summer of Test cricket, it is clear: England can regain the urn next summer.

‘Australia will respect the aggressive way that England have played this summer. And they will fear it too, knowing that England can attack and are so dangerous from all positions.

‘The England side who Australia meet next summer will be nothing like the side who lost 4-0 Down Under last winter. It could be an incredible summer of cricket.

‘The Australians will think that England have no chance against their attack playing like this, but I think it is the way to unsettle them.

‘When Australia have lost in recent times it has been against teams who have played aggressively against them in their own backyard. Australia like to be able to dictate the pace and tempo of a game.

‘But when you play against Ben Stokes’s England side, they play on their terms. It is great to see.

‘The Australian side are powerful, yes, and their pace bowlers are fantastic – but England will not be scared by them, or anyone.’

Speaking after his side’s series win over South Africa, Stokes said: ‘I’m delighted, it’s been a great series for us as a team.

‘It has been one of those series where we haven’t had many individual standout performances, but different people have put their hand up for us throughout and that’s what you want in team sport.

‘You want to be able to turn to people at key times and break the game open with either bat or ball and that’s what we’ve had throughout.’

New Zealand legend McCullum, who succeeded Chris Silverwood as England’s Test head coach, added: ‘I didn’t actually want the job but now I’ve got it I am loving it!

‘It is certainly different to what I’ve done before and I’m very lucky to work with some of the best players in the world.

‘I looked at English cricket and thought there was an immense amount of talent but hadn’t quite realised just how much there is and how good these players are.’

England’s Test team return to action against Pakistan in December and New Zealand in February, while the white-ball team prepare for the 2022 T20 World Cup.

Warner pokes fun at himself for dismal record against Broad!