Muttiah Muralitharan retired with 800 Test wickets and, as someone who provided him with seven of those, it feels right to ask him why he thinks there is a dearth of spin in the modern game.

Batting is hard right now in Test cricket but apart from India's Ravichandran Ashwin and Nathan Lyon of Australia (more on him later, Murali is not a fan) it definitely feels as though pace, not spin, is the real weapon these days. 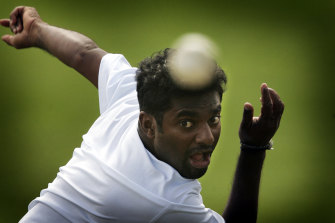 When I played, it felt as though we had to contend with both great fast bowling and mystery spinners, such as Murali. But where is the next Murali or Saqlain Mushtaq?

"The problem in Test cricket is that Twenty20s and one-day internationals have changed the dynamics," says Murali, talking from his home in Colombo before the start of England's Test series against Sri Lanka.

"When I played, the batsmen were technically so good and wickets were flat; now, they try to finish matches in three days.

"The bowlers in my day had to do extra work to get spin and do something magic to get results. Nowadays, if you bowl line and length over a period of time, you will get five wickets. It is guaranteed because batsmen cannot stay for long without attacking.

"Now they do that in T20 cricket instead. They bowl different variations because batsmen are coming after them. But in Test cricket you don't need to do it."

Will we see another golden age of Test spin bowling? Will a spinner reach 700 or 800 wickets? "Ashwin [who has 377 Test wickets] has a chance because he is a great bowler," says Murali. "Other than that, I don't think any younger bowler coming in will go to 800. Maybe Nathan Lyon is not good enough to reach it. He is close to 400 [396] but he has had to play many, many matches to get there."

Murali no longer has any involvement in Sri Lankan cricket. He works as bowling coach with the Sunrisers Hyderabad in the Indian Premier League, and spends the rest of his time running his aluminium canning business in Sri Lanka.

Sri Lankan cricket has been in a mess and it is striking how few of the legends are involved in the game. Murali will be watching the series against England, which begins on Thursday (AEDT), on television, while Mahela Jayawardene and Kumar Sangakkara are media pundits. 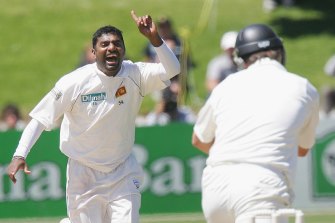 Murali celebrates one of his 800 wickets.Credit:Getty Images

"You know the politics of the cricket board and recently we have had too many players and too many captains," says Murali. "I remember when I started, Arjuna [Ranatunga] captained for about 10 years, then after that Sanath [Jayasuriya] for four years, then Mahela and Sanga.

"In my career, I had four or five captains in a 20-year period, but these days we have a captain for six months and then they change. If you want to be successful, you have to have a leader players respect. It is not because of the [lack of] talent, but because we have no leaders and do not play together as a team.

"We are like Pakistan. We have so much talent but after one bad innings we fight each other. This is the most difficult time for Sri Lanka cricket.

"They have not been together for five or six years. Everyone pulls in different directions. It is a shame because, if we did pull together, we have a lot of talented cricketers.

"We need a leader for at least four years: one coach from World Cup to World Cup. They are changing coaches every two years, so there is no clear message to the younger players. Those are the mistakes and why our cricket is on a different plane.

"We should have done better in South Africa recently, but Sri Lanka will put up a good fight [against England]. As a team, England is better than Sri Lanka, but home advantage and spin-friendly wickets help. England have their noses in front but that might change."

Murali dismissed me more times in Test cricket than any other bowler, and as a team we would spend hours going over how we were going to try to play him. In 2001, we kicked him away, using our pad as a line of defence. We put our bat behind the pad pretending to play a forward defensive. We shifted our pad outside the line of off stump and in those days you were not given out lbw on the front foot. Graham Thorpe had a great series and we ended up winning 2-1.

When we went back in 2003, Murali had developed the doosra. We did not know which way it was spinning. Thorpey said: "We've got no chance now." Thanks for that! We basically looked to survive and score at the other end. Sri Lanka won the three-match series 1-0.

I used to try to pick Murali on length. I would attempt to get to the pitch of the ball or get back as far as I could if it was short. About 70 per cent of the time, I did not really know if it was spinning in or turning away from me.

There was no DRS in those days, of course. How many wickets would Murali take in this era with the decision review system? He only played one series with DRS, against India in 2008, and took 21 wickets. India were so stung by the experience that it put them off DRS for years.

"We beat them easily," Murali recalls with a laugh. "I would say I would have had more wickets [with DRS] because it would have been hard for batsmen to use the pad.

"If I came round the wicket to a right-hander and if he missed the ball, there was a 90 per cent chance the ball would hit the wicket. But umpires were judging that it was not out because it was hitting the front leg.

"Batsmen had the benefit of the doubt. Not now. Maybe runs are less now because DRS gives the advantage to the bowler. I can remember when you played us – if you hid the bat and kicked us away now, you would be out. With DRS, they will say whether you played a shot or not. You will be out if the ball hits the wicket."

Whenever I speak to great players, I always ask about their mental approach to the game. The best just seem to have a way of dealing with failure and possess the self-confidence not to dwell on mistakes.

Murali was always a beaming, smiling character but with a steely core that made him a very tough competitor. Sri Lankan teams were always great off the field, lovely guys who would stop and chat, but out in the middle they were at you all the time.

"I did not doubt my skills" Murali says. "But in 1995 when the Boxing Day Test [against Australia in Melbourne] happened [Muralitharan was no-balled for throwing by umpire Darrell Hair], I had doubts. When an umpire says, 'you are throwing' there was doubt about whether my career was going to happen. I did not think I was doing anything wrong. I believed that technology would show that, but proving myself to other people was very hard.

"I could handle performing, but if 50 or 60 per cent of people think I am OK, the other 40 per cent will think I am wrong, so you can't please everyone.

"It is why we went to the International Cricket Council and said, 'Check everyone and not just me'. They checked everyone and came up with the 15-degree law [relating to the amount of flex in the elbow] because everyone had something, whether it be six degrees, 11 degrees or whatever."

Murali has not forgiven Australians and he believes England can win the Ashes this year, saying they have "better batsmen" if the pitches allow the ball to nip around.