Home » Sports News » Not bad for openers: England in control after skittling India for 78

Leeds: England ripped through India for 78 — their ninth lowest total in Test cricket — before putting on the team’s highest opening stand of the northern summer to take complete control of the third Test after day one at Headingley.

Winning the toss for the first time in the last nine Tests against England was the only thing that went right Wednesday for India captain Virat Kohli, whose batting line-up collapsed in 40.4 overs in the face of some high-class seam and swing bowling — led by the enduring James Anderson.

The most successful fast bowler in Test history got three nicks behind, including from Kohli, to reduce the Indians to 3-21 inside 11 overs before a lower-order implosion saw four wickets fall in six balls. Both Craig Overton and Sam Curran had hat-trick balls.

It was India’s third lowest Test score against England and brought back memories of the team’s collapse for an all-time low of 36 all out against Australia in December.

It was just the fifth time in Test history that England’s openers overtook their opposition’s total score in the first innings. 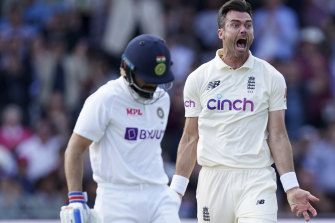 England had a lead of 42 runs, with all of their wickets in hand.

“It doesn’t get much better than that,” Anderson said.

Coming after a demoralising loss in the second Test at Lord’s — England were rolled for 120 on day five — which prompted serious questions about all departments of the team, this was just the riposte Joe Root’s side needed as they look to get back into the series from 1-0 down.

All the more given Root had been forced to go with a pace attack shorn of Jofra Archer, Stuart Broad, Chris Woakes and Mark Wood. 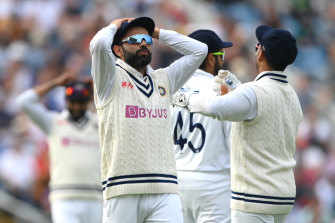 Kohli and the slips cordon react to a near-miss on day one.Credit:Getty

Overton came in for Wood and had figures of 3-14 off 10.4 overs, running through India’s tail. The 39-year-old Anderson’s were even better — 3-6 off eight overs to move onto 629 career Test wickets — and it was his early burst that removed KL Rahul (0), Cheteshwar Pujara (1) and Kohli (7) and set the tone for a dominant day.

“When you bowl someone out for less than 100, you’re never quite sure whether you have bowled well or the wicket isn’t quite as good as you think it might be,” Anderson said. “To see both sides bat on it and the way they (England’s openers) went about their business today, we just feel so calm.”

Things couldn’t have gone much worse for India, which lost Ravindra Jadeja to an apparent knee injury before the close. The team’s fielding was also sloppy, summed up by Rohit Sharma letting an edge go though his grasp at slip and for four as Haseeb — promoted to opener from No. 3 — brought up his third 50 in five matches.

Burns reached his half-century in the next-to-last over, completing an almost perfect day. There was one last ignominy for India, an overthrow for one off the final ball while Mohammed Siraj appealed, in vain, for an lbw. 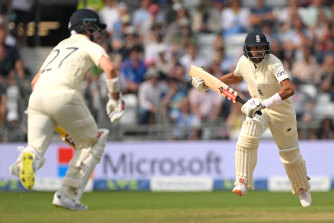 Kohli barely weighed up whether to review, quickly deciding against it and calling his team off the field. It was as if he couldn’t wait to get off.

He might regret his surprising decision to put his side in to bat. After all, it was the first time a captain has elected not to put the opposition in at Headingley in 21 years.

The conditions — a bright sky with some clouds dotted around — weren’t obviously in favour of a bowling team but it felt like that the way Anderson ran through the top order with clever and skilful bowling.

Off the fifth ball of the day, Anderson followed up a couple of inswingers with a full-length ball that seamed away, enticing Rahul to go on the drive. Buttler took the nick for the first of five straight catches and Headingley was rocking in its first Test match in two years.

Even more so when Pujara defended at an outswinger by Anderson on the first ball of the fifth over and got an edge behind.

Anderson most enjoyed removing Kohli, with the pair having been at the centre of some verbal clashes between the teams in the final two days of the second test won by India at Lord’s. Kohli attempted a straight drive off a full delivery from Anderson that straightened off a wobbled seam and got the slightest of nicks. Anderson screamed with joy and ran straight to Root to celebrate.

England didn’t ease up, with seven of the dismissals being catches behind the wicket.

“You just have to make the most of it while it lasts,” Anderson said. “These days don’t come around very enough. Be happy when they do.”

October's Twenty20 World Cup likely to be postponed for a year