What area of improvement would most cricketers prioritise during an off-season? Perhaps their strength, speed or fitness? Maybe their forward defence, or the wrist position for that perfectly shaped outswinger?

For Cameron Green it was none of the above.

“I started seeing a mindfulness person,” he tells the Herald and The Age.

The challenges of COVID-19 meant season 2020-21 was already going to be one like no other for Green, the latest all-rounder in Australia’s quest to find the next Keith Miller. Then he made a century, and another, was labelled the best since Ricky Ponting, and was picked in the Test team for the heavyweight series against India.

So, when the curtain was finally drawn in April on one of the most extraordinary summers Australian cricket had seen, Green could not wait to get away from the game he loved. Apart from the odd bit of shadow batting with a new stick, Green did not pick up a bat, nor did he roll the arm over.

“I was definitely mentally cooked by the end of the year,” Green says. “Just playing so much cricket you couldn’t wait for the season to wrap up a bit, and we could take a few breaths and recharge. We were just on the go the whole time.

“At the time it was a bit of a whirlwind. I had a few months in Perth to really let it sink in. I just hung out with friends and family, enjoyed Perth for a little bit because we didn’t spend too much time back at home. It felt like we were on the road and in hotels the whole time, unfortunately.” 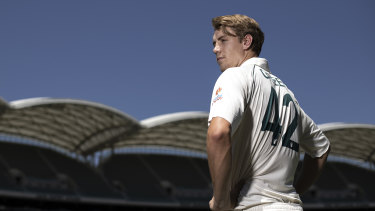 Cameron Green says he was “mentally cooked” after his first international season.Credit:Getty

Through his childhood, Green imagined what playing Test cricket would be like. For him, the reality was not what he had expected. His father and partner were present for the cap presentation of baggy green No.459, but it’s fair to say pre-pandemic debutants had enjoyed the start to their Test careers more.

“It was pretty intense,” Green says. “It was really weird playing Test cricket. You see it as a kid growing up, but it was really different.

“Being stuck in a hotel the whole time, you couldn’t enjoy the experience that much. Playing cricket and the crowds were awesome – thank god we were able to play in front of a crowd – but, at the same time, it felt weird to only have meals in your hotel room. You couldn’t get out, couldn’t interact with friends and family who came over. [It was] pretty intense in that way.”

It was not like that the whole series, as it was not until the circuit arrived in Sydney – at the time managing an outbreak in the Northern Beaches – when restrictions became more onerous. But that just added to a long, demanding summer for the then 21-year-old.

Coming from Western Australia, Green had until then a different experience of COVID. Being cooped up in a hotel for two weeks, unable to find even a brief release from the pressure of a high-stakes series and the tension building inside the camp, would have hit him harder than most of his teammates.

“We still couldn’t go and do normal things in Adelaide and Melbourne,” he says. “We weren’t allowed to sit inside [restaurants]. I know it’s not a big thing, but when you get the luxury taken away from you, it seemed like a big thing at the time.”

The idea of seeing a mindfulness coach arose during an end-of-season meeting with Western Australia Cricket Association’s sports psychologist. Green did not want to become one of those athletes who regretted not addressing mental challenges earlier in their careers.

It speaks volumes to his maturity that he would have the foresight and emotional intelligence to consider such an issue, let alone do something about it.

“I just wanted to be proactive with it … to get on top of it early rather than catch up later,” Green says. “I think we do enough work physically and technically; if I can get 1 per cent better with what I do off the field, that’s what I felt could help me next time I get mentally fatigued by the end of the year.”

At their weekly sessions, Green and his mindfulness expert run through techniques he can use to alleviate anxiety while waiting to bat. He has started meditating and uses breathing techniques to keep calm. Another tool they discuss is pivoting, to turn negative energy into positive emotions. He is yet to settle on a routine.

“I’m very fresh to it as well, so I’m trying to work it out,” Green says. “It’s when you get anxious before you go out to bat, it’s how you calm yourself down and not use too much mental energy before you get out there. 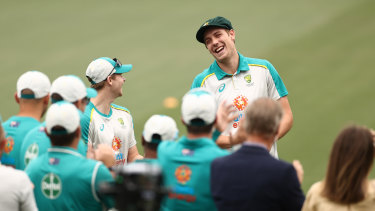 “When you’re out there you need as much of it as you can. Before games when you’re lying in bed, there’s not much you can do, but you can get anxious before games. If there’s any way to calm you down, or before you go out to bat, if there’s anything that can help, in that way that’s what we’re trying to help.”

Green’s methods for dealing with the hype surrounding him are simpler: ignore it.

Even before he had made his debut, Test legend Greg Chappell described Green as the best batting talent he had seen since Ponting, who was described as the best since Bradman.

“It’s incredibly nice getting those words,” Green says. “I really tried to stay as present as I could. I knew you can’t make runs until you’re actually there. Just keep a present state of mind and not think too far ahead, just try and do as well as I can.

“I don’t follow any of the media sites on social media – it will only scramble your thought process. There’s not too much to gain in reading those articles, whether they’re nice or not too nice.”

Green’s first Test summer could not be branded a success or failure. Though still searching for his first century and wicket, at no stage did he appear out of his depth with bat or ball.

“It wasn’t no runs,” Green says. “That was something I took out of it. I don’t have bad memories looking back at Test cricket.”

Under bowling restrictions 12 months ago as he was returning from stress fractures in his back, Green can now bowl up to 20 overs an innings – more than enough for a fourth seamer. Barring injury, Green – already with a century under his belt this season – will almost certainly play in his first Ashes series. And he will be ready for bubble life.

“It’s just reminding myself nothing will be as bad as last summer and, if it is, I’m already prepared for it,” Green says. “We know what it’s going to be. I’m sure it won’t be as bad. That’s some confidence you can definitely take from it.”