Home » Sports News » ‘Not here to put socks on centipedes’: This Australian is seven seconds off the Giro d’Italia lead

Australian Jai Hindley is seven seconds off the lead of the Giro d’Italia and optimistic about his chances of redemption after faltering in the final stage of the 2020 race.

In 2020, Hindley inherited the maglia rosa, the leader’s jersey, after the penultimate stage, tied on time with Tao Geoghegan Hart in the general classification but ahead on countback. But the British rider wrested the lead back during the final day’s individual time trial. 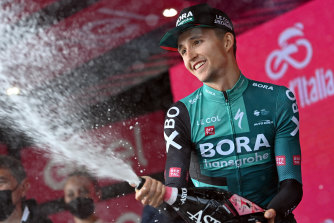 Jai Hindley has already won a stage at this year’s Giro.Credit:AP

This year, the 26-year-old Perth native enters the gruelling final week of the race in second place, trailing leader Richard Carapaz, and is confident in his chances of overall victory.

“I think we could see some big things happening, people gaining time or losing time. It’s a pretty important day and I’m keen to be at the pointy end of it all.”

This year’s Giro finale is also a race against the clock, but Hindley isn’t showing any sign of being haunted by the events that unfolded in Milan in 2020. 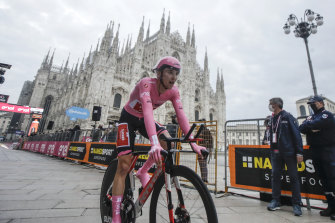 Hindley after last year’s time trial in the final stage, in which he lost the race lead.Credit:AP

“This year’s Giro ends with a ‘TT’ again and in Verona like in 2019. I remember the cool climb, the descent and the finish in the arena is sweet.

“I didn’t do too bad there in 2019, so hopefully I can do better this year. I think the Giro will go down to the finish line and every second will count.”

, the Bora-Hansgrohe rider is positive in his outlook for the remainder of the race. But he remains acutely aware of the challenges that he must overcome if he is to remain in a position to challenge in Verona come Sunday.

“I think the last week will be super hard based on the course, everyone will have to race hard and it’ll be as natural selection. Pretty much every day is super hard. I’m looking forward to it.”

Hindley’s breakout Giro in 2020 is serving as motivation for this year, as he enters the race off the back of a 2021 season plagued by persistent injury and illness.

“It was really frustrating after I finished 2020 in second place at the Giro. I had high expectations for 2021 and really wanted to prove to people and myself that I was capable of riding at a top level.

“I had a really tough season in 2021, so it’s super nice to be back at the pointy end and high level of racing. For sure pink is a huge motivation, it’d be very nice to wear it again,” he said.