So low did NSW go on Sunday that it triggered a deep search into their past. So high is Will Pucovski soaring that attention in Australian cricket is fixed firmly on his future.

As the defending champion Blues were bowled out for their smallest total since the 19th century – and their third lowest of all time – Pucovski is approaching a second straight double century for Victoria, intensifying his bid to partner David Warner on Test debut next month. 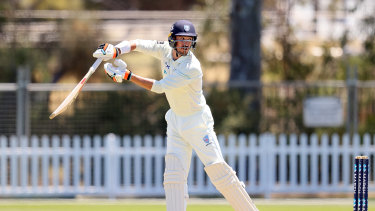 Mitchell Starc top scored with the bat for NSW on a first day to forget for the Blues in AdelaideCredit:Getty Images

NSW found themselves on the back foot from the outset at Gladys Elphick Park in Adelaide, rolled for only 64 on the first day of their Sheffield Shield match against Tasmania as former Test pacemen Jackson Bird (4-14) and Peter Siddle (3-17) ran riot.

Only Mitchell Starc, with 18, Sean Abbott and Moises Henriques managed to reach double figures as a bowler heavy line-up, with captain and wicketkeeper Peter Nevill batting at No.6, was made to look decidedly thin before Tasmania reached 4-149.

If runs were very hard to come by for NSW, they are coming free and easily for Pucovski, who continued to heap pressure on Test opener Joe Burns with an unbeaten 183.

While the Queenslander was out for 10 via an inside edge to South Australia's Dan Worrall on Sunday, Pucovski backed up last week's 255 not out with a sixth first-class hundred on day one against Western Australia at Karen Rolton Oval. 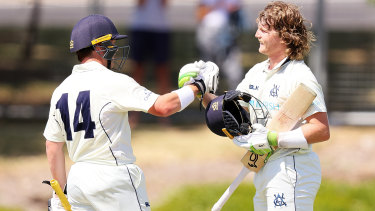 Marcus Harris congratulates Will Pucovski on his latest century on Sunday.Credit:Getty Images

Test selectors have indicated the Australia XI for the first Test against India in Adelaide next month is fairly settled but the 22-year-old prodigy is giving them reason to rethink that with his irresistible start to the season.

While Burns has 46 runs from four innings in the Shield, Pucovski has compiled 438 without being dismissed in two knocks this season, having only been promoted to opener by Victoria coach Chris Rogers in their previous game. It was a shift that paid off handsomely as the right-hander and partner Marcus Harris both posted double hundreds and broke Steve and Mark Waugh's all-time record for a Shield partnership.

On Sunday the composed Pucovski was again all the rage, making his opponents pay after he was dropped on 105 and batting all day to steer Victoria to 1-322 at stumps.

Former captains Ian Chappell and Kim Hughes are now calling for Pucovski's inclusion against India and they aren't alone.

He has twice been picked in Test squads before but withdrawn from them for personal reasons, having endured challenges with mental health and concussion in his young career. But he has now declared himself mentally ready for the next level.

While Pucovski's latest star turn was another glimpse of why he has such a bright future with Australia, there was a reminder from a Test batsman from the very recent past about his capabilities with Queensland captain Usman Khawaja making 131 as the Bulls made it to 4-331 at Glenelg.