We can all agree that the late John Edrich opened the batting in the first one-day international. But in fact it was in 1966, and at Lord's, not Melbourne, and the first ball was bowled by Garfield Sobers in a match between England and West Indies – a proper one-day international match of 50 overs a side, with a maximum of 11 overs per bowler. 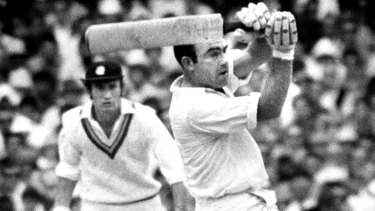 John Edrich in action at the MCG during the first official ODI in 1971.Credit:Fairfax Photographic

Ted Dexter took over as captain when England fielded – Colin Cowdrey had injured himself – and spread the field once each West Indian batsman had played himself in. Dexter had worked out that the key to limited-overs cricket was to cut off boundaries, winning the first two Gillette Cups for Sussex in 1963 and 1964. The West Indies were dismissed for 150 and lost by 67 runs.

Or if you want to ignore this game, England played Pakistan in an ODI at Lord's in the following summer of 1967. Again it was part of a triangular tournament with the Rest of the World.

Not only for readers of London's Telegraph newspaper, an interesting feature of these early ODIs was how much the cricket correspondent, EW Swanton, was in favour of them. Of the inaugural match in 1966, he wrote: "It always had ingenuity and positive action and held the crowd's attention in a way orthodox cricket nowadays too often does not."

Swanton was also at the MCG in 1971 when Edrich made a brisker 82, hitting the first boundary in "official" ODIs. Geoffrey Boycott, meanwhile, scored eight in eight eight-ball overs before he was out hooking.

"The arts of the game [were] in full display," Swanton reported from Melbourne, not least because Australia bowled 16 overs of effective spin out of their 40 eight-ball overs.

Fifty years on, or rather 55, more than 4000 ODIs have been played, and the main thing is that "the arts" are still on full display.

Horse racing tips TODAY: Who to back at Kempton, Redcar and Wolverhampton