AFL premiership winning coach Denis Pagan pulled off an amazing double when he won the Victoria Derby with the maiden Johnny Get Angry at Flemington on Saturday.

The former North Melbourne and Carlton boss has only turned to racehorse training in the past year and has had only a handful of runners, but he is now a group 1 winning mentor after his galloper, ridden by apprentice Lachlan King, outstayed Hit The Shot and the well backed duo Young Werther and Cherry Tortoni to land the $2 million classic.

Pagan won the AFL flag with North in 1996 and 1999, while King was landing a family double after his father, Steven, won the classic in 1991 on Star of the Realm. 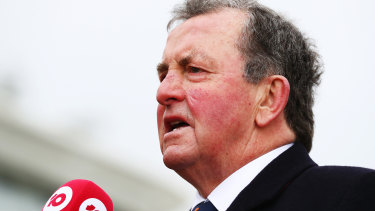 Doyle felt 'intimidated' by stewards during an enquiry at Kempton