Australia captain Tim Paine has apologised for his on-field behaviour in the third Test after coming under fire from former international stars.

Paine has also defended Steve Smith against allegations of unsportsmanlike conduct, saying he was not trying to change Rishabh Pant's guard. 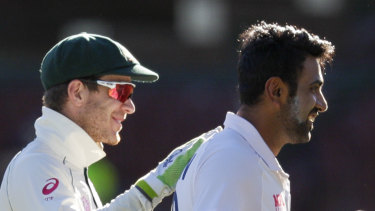 Tim Paine congratulates Ravi Ashwin after the Sydney Test. The pair had a heated exchange on the last day.Credit:AP

India great Sunil Gavaskar called for Paine to be dumped as captain, saying his "days are numbered", while former England skipper Michael Vaughan labelled his conduct as "very, very poor".

Paine was appointed skipper in 2018 in the aftermath of the ball tampering scandal with the mandate to improve the team's on-field behaviour, but the events in Sydney have again drawn sharp focus on the side.

Earlier in the game, Paine swore in a conversation with umpire Paul Wilson upset a call had gone against Australia, and was docked 15 per cent of his match fee by the International Cricket Council for dissent.

"Bitterly disappointed with the way I went about it. I felt my mood throughout the whole Test match was probably a little bit off, the way I spoke to the umpires early on day two was also unacceptable," Paine said.

"I've got to cop that on the chin, it's not the way I want to lead this Australian team, certainly not a reflection of how I want to do it going forward. I always talk to our players about playing this game on skill and not on emotion and yesterday I fell short of my own standards and expectations.

"I wanted to address that this morning and apologise to our fans and people who heard some of the things I said yesterday.

"It wasn't good enough and particularly from the leader of this team. I have to cop what's coming on the chin and really looking forward to getting to Brisbane, bouncing back and playing the game more like Tim Paine plays the game.

"Yesterday was a poor reflection of that and not something that I want to be known for."

Paine, who said he admitted to Ashwin that he had come across as a "fool" for dropping a chance moments after sledging the batsman, said his emotional state had contributed to him grassing three catches.

"For me I think it was all around my mood. Being a little bit tense. And not being focused on my No.1 job at the time which was to catch the ball," Paine said.

"I was distracted by other stuff and a bit agitated and grumpy at times. For me, the best version of Tim Paine playing cricket, wicketkeeping and captaining is someone who has a smile on his face and when he’s enjoying the game, and when I’m like that, I think I’m a very, very good wicketkeeper.

"When you’re a bit tense and when your hands and arms are a bit stiff they don’t go in. It was a big learning for me yesterday. I haven’t had a day like that in my cricket career. And I’ll be doing everything I can to make sure I don’t have another one."

Gavaskar slammed Paine, whom he predicted would be replaced as captain after this series.

"It was unbefitting of a captain of a national team to be talking about something other than cricket," Gavaskar said on Channel Seven.

"You want to have a go at the opposition, you talk about their cricket.

"But when you talk about something else, it shows your frustration. It shows you are not able to bear the fact that the opposition is putting up a fight.

"I am not an Australian selector but his days as captain are numbered."

Vaughan, who led England to a drought-breaking victory in the epic Ashes series of 2005, said Paine's conduct was reminiscent of previous Australian teams.

"Let’s be honest the captain of Australia since sandpaper gate has led this team with great distinction,attitude & never once has he crossed the line of negativity in my eyes,but today his language behind the stumps & sledging today was back to the old days !! Very very poor !!" Vaughan tweeted.

Smith's conduct was also questioned after he appeared to scuff out Pant's guard, with critics saying it was more poor sportsmanship from the player who was rubbed out for his role in the ball tampering scandal in South Africa.

Paine, however, said there was nothing sinister in Smith's behaviour but conceded he would have to review shadow batting at the wicket while in the field.

"Steve's quite upset about it. That's something Steve's done a lot. It's something we always have a laugh about because he just loves batting so much and even when he's out on the field he's shadow batting and marking centre," Paine said.

"He actually does it a lot. I'm sure if people are happy to look back at the footage you'll see it happens probably more than once a Test match with Steve.

"There's no way in the world he was trying to change Rishabh Pant's guard or anything like that. It's just one of Smithy's things that he does. Now that it's come up as it has it's something he might have to look at because of the perception of it."