Facebook has banned the sharing or viewing of our news articles on its platform. For independent journalism straight from the source, download our app and sign up to our newsletters.

Test captain Tim Paine narrowly avoided what would have been his second dissent charge this season amid growing player dissatisfaction with the quality of umpiring at domestic level.

Player behaviour is under the spotlight and so too the standard of officiating after several Test stars struggled to conceal their disappointment at being on the wrong end of contentious decisions. 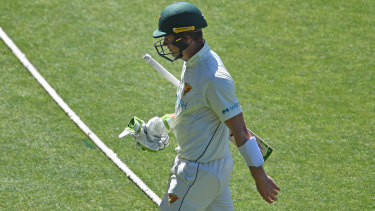 Test captain Tim Paine came close to a second charge of dissent this season, while playing for Tasmania in the Sheffield Shield.Credit:Getty

There is bemusement among match officials that no player was cited for dissent in last week’s games but Paine and fellow Test star Marnus Labuschagne came close to being booked for their behaviour in the Sheffield Shield clash between Tasmania and Queensland.

A source familiar with the issue has told The Sydney Morning Herald and The Age that the reactions of both players were considered by match officials to be at the high end of allowable disappointment but short of the “excessive, obvious or inappropriate” level to warrant a charge of dissent.

The pair had lingered at the crease unhappy to be given out by umpire Darren Close, who had several other decisions not well received by players from both sides, but neither spoke to the official.

Paine looked at his pads then at the stumps, staying for some six to seven seconds before setting off in the second innings. Labuschagne threw his head back and shook his head in disagreement as he left, out for the second time in the game to what appeared a line-ball call.

Former Test captain Steve Smith also escaped censure for his response to a caught-behind verdict which went against him while playing for NSW against Victoria.

Paine was fined 15 per cent of his match fee for dissent after swearing at Australian umpire Paul Wilson during the third Test against India in Sydney.

Tigers captain Paine and his opposing number, Usman Khawaja, met with match referee David Johnston after the game where about 10 decisions were debated, according to sources. The post-game debrief between captains and the match referee is customary but the number of incidents discussed was unusual.

There was acknowledgment from Johnston that Labuschagne had copped some rough calls after a Tasmania official queried in another discussion why the Test No.3 had not been cited for dissent.

Labuschagne has a reputation among the states for his slow departures but his supporters say his disappointment at getting out is an indication of the passion he has for the game.

There have been concerns for about three to four years among players and coaches over the quality and depth of umpiring stocks at state level, an issue highlighted by several howlers during the Big Bash League.

The umpiring pool was tested further this year by the travel restrictions in place for the COVID-19 pandemic, preventing the International Cricket Council’s overseas-based elite umpires to stand in the games against India.

This meant Australia’s best domestic umpires were called in to perform duties at the top level, placing more strain down the line.

Cricket Australia is mindful of not engaging in a public spat with players over umpires but defended officials, many of whom, like the players, have also endured bubble life with uncertainty as to where they will be travelling to next.

“Umpires play an integral role in our game and are critical to cricket, from the elite through to the grassroots,” CA’s match officials manager Sean Easey said.

“Like any participant, our umpires can make errors but they deserve to be respected. Our umpires work incredibly hard with their coaches on reviewing performances and are always trying to improve.

“In what’s been a challenging year, Cricket Australia is grateful for the sacrifices that have been made by our umpires and proud of their contribution to an incredible summer of cricket.”

Former Australia captain Ian Chappell is critical of batsmen’s responses after being given out, saying it was “character building” for them to be able to keep their emotions in check until they reached the privacy of the dressing room.

“They’ve brought in the DRS system, which is basically saying to the players ‘argue with the umpires’,” Chappell told the Wide World of Sports website. “I will say this, and not just about the Australian players, but a lot of players from around the world are taking an inordinate time to leave the crease when they get out.”