England were brought back down to earth with a bump as Pakistan’s under-fire openers combined to seal the biggest 10-wicket win in the history of Twenty20 internationals.

It appears ridiculous to suggest that Mohammad Rizwan and captain Babar Azam, the world’s number one T20 batter and the one-day equivalent respectively, should be the target of criticism.

But this is Pakistan, where expectation and passion reach levels other places around the globe cannot fathom, and the pressure was clearly on as they set off in pursuit of a 200-run target to level the series under the lights of the National Stadium. 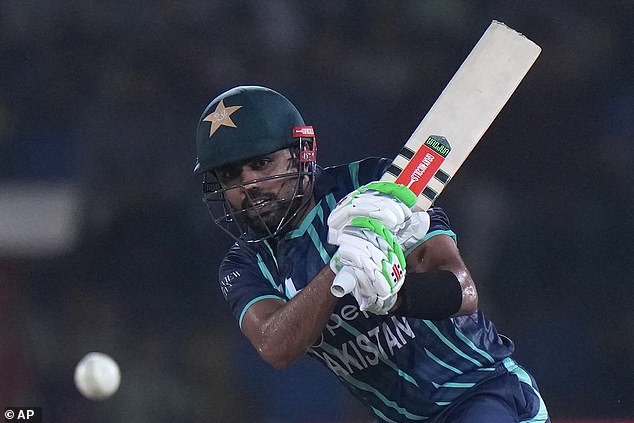 England had gone 1-0 up earlier in the week chasing themselves but Moeen opted to bat first on a fresh pitch on this occasion, a decision that appeared to be vindicated when he himself struck a rapid, unbeaten half-century.

However, he was trumped by opposite number Babar, who struck a thrilling hundred, as Pakistan powered past the previous best chase without losing a wicket – the 169 target negotiated against them by New Zealand six years ago.

A dropped catch above his head by Alex Hales, back-pedalling from mid-off off the bowling of Liam Dawson was the only notable chance that England created on a pitch that the pair otherwise had total mastery of.

It came in the final over of the powerplay when Dawson, in for the injured fast bowler Richard Gleeson, held one back to induce Rizwan into a mistake. 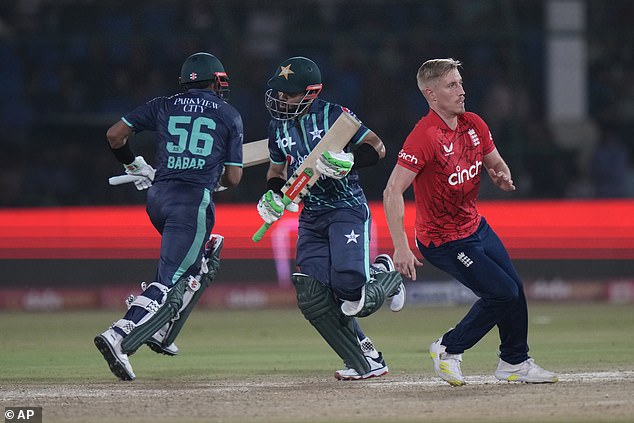 Had they taken the opportunity, when Rizwan had half of the 46 on the board, things might have taken a different course but Babar in particular responded to accusations that he chews up too many deliveries, by reaching triple figures off just 62 of them.

Rizwan survived a half-chance when Moeen got his fingertips on a cover drive in the penultimate over but that would only have removed the ignominy of a first ever 10 wicket loss for England in the game’s shortest format. 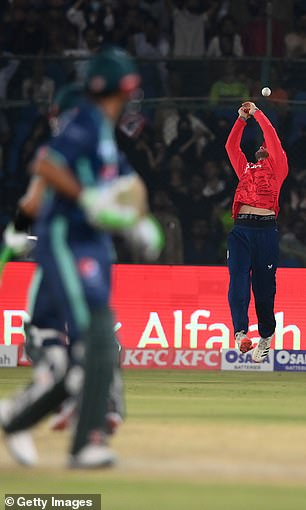 And when Babar carved David Willey through the off side to seal victory with three balls unused, another near full house in Karachi roared their approval.

It appeared that Pakistan were struggling in their bid to win just a fourth T20 in nine attempts this calendar year when England recovered from a sluggish start.

Their innings was slowed by fast bowler Shahnawaz Dahani, who had not managed more than a single wicket in any of his previous seven international appearances but found himself on a hat trick here.

Dahani plays for Sindh, the local province, and so got quite a reception from another near sell-out crowd as he turned on his heel in celebratory dash, finger-pointing, face-wide beam – an acknowledgement not towards one of the teeming stands but the commentary box, presumably for some tactical advice passed on by one of its two legendary fast-bowling inhabitants Wasim Akram and Waqar Younis.

The reduced-speed off cutter that foxed Alex Hales was followed by a ferocious fuller ball that snuck behind Dawid Malan’s legs to strike timber again.

It disrupted the start to the innings and the same bowler believed he had sucked momentum from its end later when Moeen hauled one to deep midwicket. 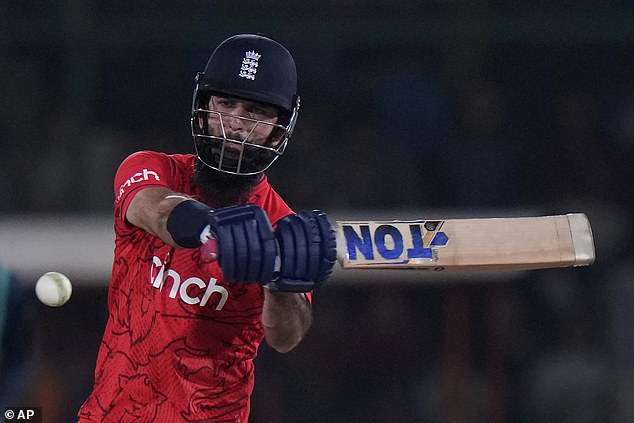 Anticipating Khushdil Shah would complete a straightforward catch, Dahani set off on his now customary drill and in a slapstick moment ended up within yards of the long-off boundary before being ushered back to the top of his bowling mark by Babar.

For Pakistan, such a miss appeared no laughing matter. Moeen, who hit England’s fastest-ever T20 50, from just 16 balls versus South Africa earlier this year, is a dangerous man to reprieve and when he found himself on strike for the final two balls of the innings, he deposited both over the ropes in the arc between midwicket and long-off.

That he had such a platform was also down to the clinical work of Ben Duckett and Harry Brook in mid-innings. 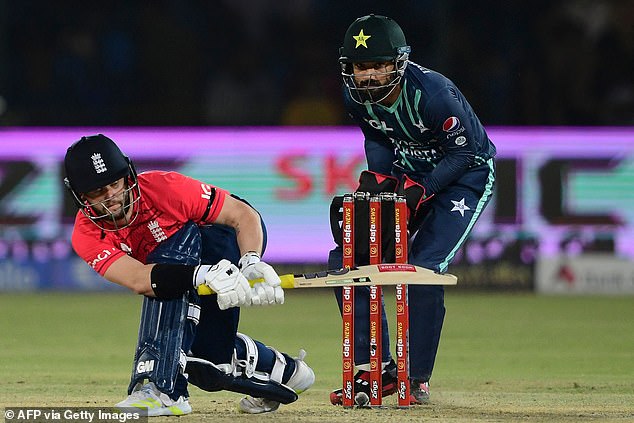 Prior to this tour, Duckett hadn’t played for England since the week that followed Hales’ pre-2019 World Cup axing and is simply keeping the number four spot warm until Ben Stokes joins up with the squad in Australia next month.

However, having felt his way into the series on Tuesday, the Nottinghamshire left-hander did himself little harm for future consideration beyond this tour, his wristy sweep work ensuring that Pakistan’s spinners could not get through cheap overs.

Regular accessing of the boundary powered him past third-wicket partner Phil Salt and such was his touch that it was a surprise when he missed a dink off slow left-armer Mohammad Nawaz to be dismissed for a 22-ball 43.

Brook then combined in a stand of 59 off 27 deliveries with Moeen, but it was far from the stand of another raucous night in Karachi.