Sydney Sixers opener Josh Philippe says he hopes to eventually force his way back into Australian colours following a sparkling half century in his team’s 152-run Big Bash win on Sunday night.

The wicketkeeper-batter was electric against the Melbourne Stars, hammering 83 from 47 balls, which included one six that ended up on the roof of the SCG members pavilion. 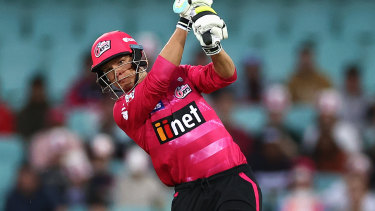 Josh Philippe in action for the Sydney Sixers against the Melbourne Stars on Sunday night. Credit:Getty

The Sixers easily defended 4-213 by bowling out the Stars for 61 – the third lowest total in BBL history.

Philippe earned an international call-up in February this year for T20 matches against New Zealand but did not take his chances.

Combined with appearances against the West Indies and Bangladesh later in the year, Philippe made 138 runs from 10 innings. He passed 13 on just two occasions and took no part in Australia’s successful T20 World Cup campaign.

“It was great to have a taste,” Philippe said. “It didn’t quite go to plan but it’s certainly where I want to try and get back to. Hopefully I can keep doing well and keep putting my name forward.

“As a kid I always wanted to play for Australia and it’s still no different.

“I’ve felt it’s been the best form I’ve had coming into a BBL [tournament]. It’s nice to get a few runs to start.”

The Sixers are hunting for a third straight BBL title and will continue their campaign on Wednesday evening with a match against the Hobart Hurricanes in Launceston.

“We certainly gel very well,” Philippe said. “We know exactly how we want to play the game and we’re just really clear on our game plan. I think [roster stability] does make a big difference.”

Miss perfect for Condon and Doyle in Lowther