Australian star Michael Matthews snatched a bronze medal as Belgian young gun Remco Evenepoel made the most of a sleepy peloton and a sleepless rival to power to a solo victory in the men’s road race at the UCI World Championship.

Evenepoel, who only weeks ago won the Vuelta a España, pulled on his first senior rainbow jersey in Wollongong after making three decisive moves on a day of comparative inaction by most of the peloton’s big-name stars.

After jumping into a breakaway with 53km in the 267km race, Evenepoel kept attacking and broke his last rival, Kazakhstan’s Alexey Lusenko, on the second-last climb of the leg-torching Mount Pleasant. The 22-year-old rode alone for the last 25km to victory, and finished 2 minutes and 12 seconds ahead.

Until the final sprint for minor medals, the other main contenders were nowhere to be seen for most of the day, initially unaware they’d let Evenepoel get so far away up the road, given race radios are not used in the World Championships.

On another day, the peloton might have been able to swoop home, but Evenepoel’s aggressive ride saw him take an insurmountable lead.

Matthews stayed unsighted in the peloton for most of the day until he finally appeared in a sprint finish in the last 200 metres in Wollongong, and claimed third place on the line. 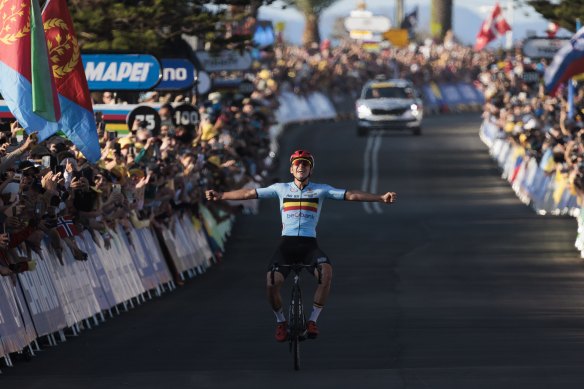 It was the 31-year-old’s third career podium finish in the world championship road race, after silver in 2015 and bronze in 2017, and his second medal of the week after a bronze with the Aussie team in the mixed time trial.

Ahead of Matthews on Sunday, Christophe Laporte (France) finished in second, and favourite Wout van Aert (Belgium) finished behind him in fourth.

Another of Evenepoel’s major rivals, Dutch rider Mathieu van der Poel, withdrew from the race after less than an hour due, following a race-eve arrest for alleged assault at his Sydney hotel. Van der Poel allegedly pushed teenagers who’d knocked on his door late at night, and after being taken to the police station, got to bed at 4am. 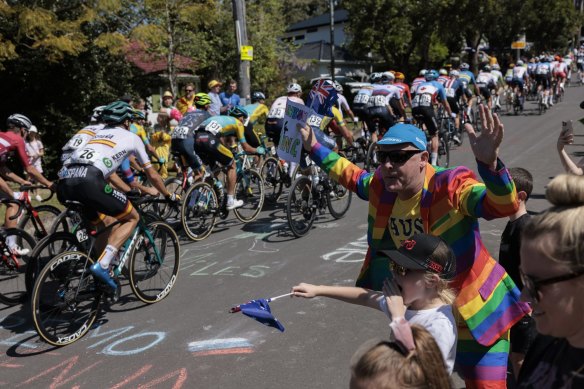 Action along the hill climb on Mount Pleasant Road during the Men’s Elite Road Race at the UCI World Championship.Credit:Brook Mitchell

Coupled with his win in the Vuelta, Evenepoel’s dominant victory in Wollongong confirmed his status as a young superstar of the cycling world, and came after a massive controversy in last year’s world championship race where he was slammed as “selfish” in cycling-mad Belgium.

Evenepoel was criticised for not supporting van Aert, the designated Belgian team leader in the race, which was won by Frenchman Julian Alaphilippe, after an unwise solo attack in the Olympics as well. The relationship between the two Belgian stars reportedly remains frosty. 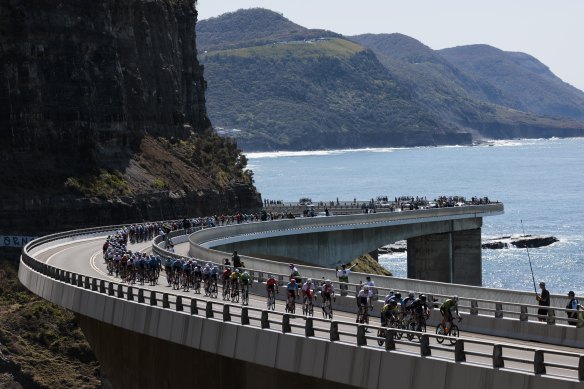 The peleton rounds the Sea Cliff Bridge during the Men’s Elite Road Race at the UCI World Championchips.Credit:Brook Mitchell

But Evenepoel silenced his critics in Wollongong and pointedly put his finger to his lips in a “shoosh” sign when crossing the line. Van Aert gave his teammate a bear hug after the race, too, and Evenepoel indicated the Belgians had gone into the 2022 race with two leaders.

“How we raced today was really like a team,” Evenepoel said. “As we said before, it doesn’t matter how, we want to become world champion as a team. It was Wout’s chance or my chance, and my chance was to go from early on. Wout’s chance was to sprint, and I guess the early attack made it today.

“I am super happy I had the legs today. When you are in (a group of) two, you just want to work as long as possible but I felt quite quickly I was stronger than Alexey and I wanted to go along, because there is no time to waste on a circuit like this.

“But the last climb was actually super hard, my legs felt like they were going to explode. I kept pushing because it is a world championship, you don’t want to lose any second, you just want to win the jersey if you are in position for it.”

Gytrash relishing life at the Farm