Globetrotter Prince Of Arran has produced the perfect Melbourne Cup trial, according to his trainer Charlie Fellowes, dashing home to run fourth in Saturday's Caulfield Cup.

Fellowes, speaking from the UK moments after the race was won by Verry Elleegant from Anthony Van Dyck and The Chosen One, said his feelings were torn after the war horse produced yet another top four finish in Australia. Prince Of Arran has twice run in a Melbourne Cup, finishing third in 2018 and second last year. 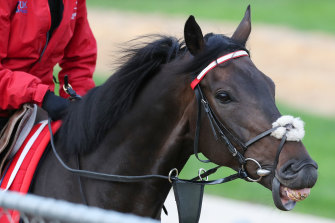 "I don't think you can get a more perfect prep run for the Melbourne Cup really than that.

"But there is a big part of me that thinks what would have been if we had a nice draw and we were able to sit midfield – wow he would have gone close, surely."

The Cup market was shaken up on Saturday morning when stewards announced that Aidan O'Brien's three-year-old Santiago would miss the race having failed to impress connections in his short time at Werribee so far. Fellowes said that left this year's Cup "wide open".

Prince Of Arran, who was ridden by Jamie Kah, "will do a couple of easy bits of work going into the race and that should have him spot on".

"I think you could really argue that's maybe even his best run down in Australia," Fellowes said.

"I had to cop and go back on him, but god he was a big run from the rear of the field," she said.

"When she gets to 2400 metres the main thing is to get her in a rhythm … I had to give her a razzle up on the turn but like I say she was very tough," said Caulfield Cup-winning jockey Mark Zahra of Verry Elleegant's run.

Dashing Willoughby finished a long last after leading the Caulfield Cup field, with jockey Michael Walker reporting that he might have pulled a muscle, while Vow And Declare was beaten eight lengths in 15th.

"He's very one-paced. I think we have to ride him a bit more forward to see if he can keep grinding away that way, because he's just not showing any change of speed."

Four-year-olds Warning and Toffee Tongue also failed to make an impression, while Master Of Wine faded to finish 10th after hitting the front around the final bend.

"They were just a bit sharp for him around Caulfield," Currie said.

"He'll be better on the bigger, flat track at Flemington."

Royal Ascot day one tips: Life will be a Beach for Battaash backers in King's Stand

Cummings: Everest should have Group 1 status