Selections based on a soft to heavy track. Monitor for bias/pattern.

Forget 4. Deniliquin’s last start at Randwick 12 days ago in a Midway Handicap (1600m), where the gelding had no luck. The four-year-old was checked/blocked for most of the straight and lost all his momentum. 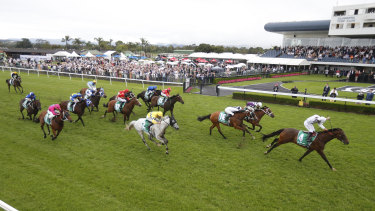 Prior to that effort, he hit the line hard first-up at Goulburn to finish third after getting too far back in the run. The John Thompson-trained galloper drops in grade, receives a significant barrier change and is ready to peak reaching optimal fitness over a preferred distance.

Dangers: 2. Tidal Creek started a rock-solid $2.40 favourite last start at Canterbury and was honest in defeat. Further, the colt made an early move at the 800m mark and battled on well in the straight. He is proven in this class, maps to get all favours and a definite chance. 3. El Lago beat the rest easily last start at Grafton behind metropolitan galloper Our Candidate. He is on a quick backup and brings the best last start figure to this event. 1. Our Bambino is suited back to his home track and will stay the trip.

How to play it: Deniliquin WIN. Odds & Evens: EVENS.

1. Sawrey was brave in defeat last start at Goulburn 13 days ago in a fast-time race with decisive margins throughout. The three-year-old raced wide throughout and hit the line hard to just miss in a tight finish.

Additionally, Punter’s Intelligence recorded the gelding ran one of the fastest final 400m splits of the entire meeting in 23.51. To further the merit of his performance, that race rated the highest overall relative to the meeting when historically comparing time, class and additional factors. The Gwenda Markwell-trained galloper is rock-hard fit, brings the best last start figure and may get the track pattern to suit. Expect a bold showing.

Dangers: Forgive 10. The Halo’s last start where she was stirred up pre-race and then raced keenly throughout transit. The filly has an improved race setup with a significant barrier change, and all her peak figures have come on rain-affected ground.

3. Rovers Pepper was honest at Canterbury last start in a strong time race. He gets his chance dropping back to the provincial circuit and maps well. First starter 5. Hells Itch has trialled well enough and is a market watch. 9. Fairway Star must go in all exotics.

How to play it: Sawrey WIN. Odds & Evens: SPLIT.

Leaning towards 2. Noble Legend who has a fitness edge on some of his main rivals and is coming out of time/sectional merit races this preparation. The three-year-old gelding had the bias against him last start at Warwick Farm eight days ago and battled on well for third place. He will appreciate the bigger track and gets blinkers on for the first time.

Dangers: 4. Avoidance returns as a gelding and has trialled well for this assignment. He was well backed on debut at Randwick, starting a $3.10 favourite, and gave the impression he would improve from that experience and come back improved next prep. Expect him to be in the finish.

Market watch 5. Clovis who had a quiet trial on the synthetic track in a fast time heat. 7. El Bravo resumes without an official trial and will undoubtedly be hitting the line.

How to play it: Noble Legend WIN. Odds & Evens: EVENS.

14. Winnertakesitall resumes and looks to have come back improved after a strong trial at Randwick on the synthetic. The two-year-old filly showed natural gate speed in her heat and went through the line not extended. Her debut run last preparation at Canberra was full of merit, where she led at a solid tempo and tried hard in a time race with decisive margins throughout.

She then started $8.50 in the Group 3 Magic Night Stakes (1200m) but was slow to recover and was immediately spelled. Moreover, that race was won by subsequent Group 1 winner, She’s Extreme. The Peter & Paul Snowden-trained galloper is a nice type, will roll forward, is proven on the rain-affected ground and is well-placed.

Dangers: 7. Sha Of Gomer returns as a gelding and has had a quiet trial. Forging his first start at Kensington and is a key late market watch. 11. Inessa has trialled well and maps to be the likely leader. She is drawn well and looks progressive. 4. First Grange was sound first-up at Bathurst and is suited back in distance. The colt receives a gear change in pacifiers and maps to stalk the pace.

How to play it: Winnertakesitall WIN. Odds & Evens: SPLIT.

5. Rapidity was run to suit last start at Queanbeyan 10 days ago but hit the line hard in a high-rating race. The six-year-old mare is a consistent type, and all her career peak figures have come on heavy ground. In addition, she returns to her home track, is ready to peak third-up and will appreciate the anticipated genuine tempo. Each-way.

How to play it: Rapidity E/W. Odds & Evens: SPLIT.

2. Go Gazza had no luck last start at Newcastle when checked/blocked for most of the straight. The four-year-old receives a senior jockey in Tommy Berry, who has a strong record on the gelding for three rides and two wins. Expect a positive ride, and the galloper has winning figures for this event. Each-way.

Dangers: 10. Skyray is rock-hard fit and won well at Goulburn last start, albeit finding the superior ground. He will look for the last shot and revel in the testing conditions. 1. Diva Bella has solid form lines for this event and can rate. 4. Rocstar Boy beat Go Gazza last start and ran one of the fastest final 200m splits of the meeting in 12.16. Add 3. Ka Bling and 6. Easy Rosie to trifectas and first fours.

1. Rebel County led at a solid tempo first-up at Muswellbrook and stuck on well for fourth place in a strong time race. Further, the other on-pace runners faded badly, adding merit to his performance. The Gerald Ryan & Sterling Alexiou trained galloper will be fitter for that effort, receives a significant barrier change, maps to control the pace and has multiple winning figures for this assignment.

Dangers: 6. Cmon Reg fought off challengers to win at this track five days ago, bringing that quick backup advantage over his rivals. He has key factors in his favour and will undoubtedly run well. 2. Podium has trialled well enough and has strong form lines behind numerous subsequent winners. He is still lightly raced and has a positive profile for this event. 5. Mandalorian and 3. Vanburg are both fit and handle the conditions.