Keen on four-year-old mare 1. Lago’s Daughter who has placed in four of her last five. Closed from well back a fortnight ago, and will relish the much longer straight here. 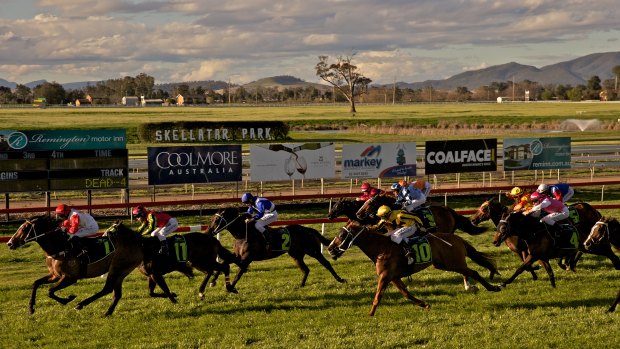 Dangers: Resuming, and trained on the track, 3. Zoria’s Hero is the immediate threat behind two trials, with key gear changes. Keep watch on 4. Mystic Isle who made up late ground on debut at that same Inverell meeting as the top selection. Gap to the rest.

How to play it: Lago’s Daughter to win. Odds and Evens: Odds

Liked how four-year-old 2. Super Freds swept home to win a provincial Midway maiden, capping a run of very consistent form since mid-November. Hard fit and stays at the trip, and only needs cover to make it two straight.

Dangers: Capable provincial filly 3. Florida Sky resumes from the inside draw behind a smart trial win. Those two should fight it out but include 1. Calamity Fox and 6. Alenia in exotic bets.

How to play it: Super Freds to win. Odds and Evens: Split

Sticking strong with progressive and lightly raced filly 4. Agirlsbestfriend after her terrific last-to-first maiden win at Coffs over a similar trip. Looks well treated, only half a kilo over the minimum stepping up to a level that isn’t much harder. She’ll go on to win better races than this.

Dangers: Big watch on 1. The Hungarian who reloads off a six-week freshen-up via an easy trial, although has to overcome the outside gate. Honest 6. Zacariah hasn’t won for a long time, but he’s beaten all bar the winner in three of his last five, and his get-back and run-on style is suited to this course.

Keep safe 5. Miandelle second-up after getting totally lost in traffic resuming off a near eight month break; while 3. Toongi Bound is on the next line fourth-up.

How to play it Agirlsbestfriend to win. Odds and Evens: Split

Back in grade, and dropping a little in trip augur well for improving metro and UK-bred four-year-old 1. Burns To Embrace. Was only a length away on Boxing Day at Randwick in a handy form race with the third-placed runner then coming out and winning at Canberra. Will enjoy the long run home here.

Dangers: Another visitor from Warwick Farm, improving 6. Nobel can peak third-up over more ground from the inside draw; while 12. Eau De Vie can also figure strongly from a soft draw after a tidy closing debut run. Include 8. Shigeru fifth-up; and 14. Rhiannon fourth-up; in trifectas and first fours.

How to play it: Burns To Embrace to win. Odds and Evens: Split

Plenty of early pressure here & it shapes perfectly for five-year-old 4. Casino Lord first-up for seven weeks, and drawn to get cover. Has kept ticking over in work after a quiet trial in mid-December, and can explode home late on his preferred firm going.

Dangers: Big watch on 2. Tucson Valley who resumes off a lengthy break, but fitted with a smart trial win here. Won four straight last prep from BM 58 grade to the BM 85 Cannonball at Coonamble. Keep safe, tough and consistent weight carrier 1. General Soho who resumes from the inside barrier off two trials; while 7. Amazing Nicci is best of the rest third-up and dropping down to the limit weight.

How to play it: Casino Lord to win. Odds and Evens: Evens

Plenty of chances in a very tough race, with most of the better fancies drawn wide. At big odds, provincial-based 2. Charlie’s Law can finish over them coming back sharply in distance 25 days between runs. Was long odds when doing his best work late over the mile in better provincial company just before Christmas, and with enough speed on up front here, watch for him motoring home late from a good over draw.

Dangers: The betting will tell a story with 1. Jutland, who resumes from the inside behind a forward heavy track trial. Provincial mare 11. Boho Chick rises in grade third-up, but the jockey booking is significant and she’s well over the odds. Tough sprinter 12. The Lion is another one capable of charging into the money late deep into his prep. Included in wider exotics 7. Drachenfels; 9. Chyna Xpress; and 13. Stormy Pluck.

How to play it: Charlie’s Law each way. Odds and Evens: Split

Another wide-open dash to finish. Keen on Exosphere three-year-old 3. King’s Duty striking on debut. Bolted in a recent trial here, and has been gelded. Looks promising.

Dangers: Big watch on ex-Victorian 13. Game To Love who can improvely sharply second-up for the new Tamworth stable; while 2. Cyclone Rupert having his third start; and a pair of Scone-based debutant fillies 11. Sumati wearing blinkers; and 12. Sumptuary who has spent a stack of time at the trials; are both capable of running into the minor money.

How to play it: King’s Duty to win. Odds and Evens: Split