Ciaron Maher has underlined his standing as one of Australian racing’s greatest ever jumps trainers, winning his sixth Grand Annual with Heberite in an action-packed 150th running of the Warrnambool feature.

The race favourite, Tuesday’s Brierly winner Vanguard, lost his rider a third of the way through the race, before San Remo stumbled over a steeple in front of the swollen grandstand, causing fears the horse had suffered a catastrophic injury. 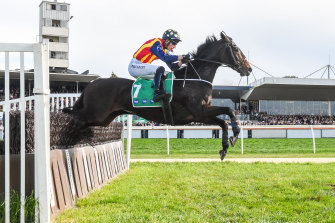 Heberite, with William McCarthy on board, on his way to victory in the Grand Annual.Credit:Getty Images

Both horses were fine, however, as Heberite led the field full of steam, and despite being headed approaching the final turn, he fought to the lead under William McCarthy and kicked clear to provide Maher with his sixth Grand Annual. 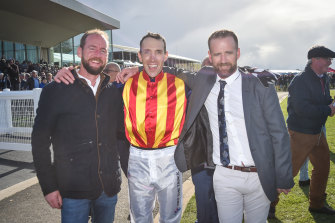 “I think it’s the best race on the whole calendar, well, it is to me anyway. It’s phenomenal, the whole carnival, the jumps races have been really hard fought.

“William McCarthy is a super rider, he’s a great man to have around the stable. I’m thrilled for him and the owners, they sent him over, and my brother Dec, his heart and soul is these jumpers.

“He puts everything into it and his horse [Eyes Are Blue] at about a million-to-one ran third.” 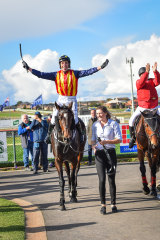 A jubilant McCarthy returns to the mounting yard.Credit:Getty Images

McCarthy was exuberant following the win. He pumped his fists in the air as Heberite marched into the winner’s stall, and the Irishman blew kisses to the crowd before dismounting the seven-year-old.

McCarthy had to waste about 2.5 kilograms to get down to ride Heberite at 64 kilograms, but it delivered the 38-year-old a career highlight.

“I’ve been working my arse off all week to get my weight down for this fella. Unfortunately, he was out of Steve’s [Pateman] weight category, it was a bit light for him, and absolutely privileged to get the opportunity to step in when he can’t do it.

Will Gordon, the rider of San Remo, suffered a suspected dislocated shoulder in his fall, however Lee Horner appeared fine after being dislodged by Vanguard.

The listed Warrnambool Cup couldn’t provide Maher with the Thursday feature double, however, with his hot favourite Grandslam struggling to run out the 2350 metres in heavy, testing conditions.

Instead, it was bottom weight Witchachar Star, trained by Chris Hyland, who burst into the straight and streamed to victory down the outside of the track, giving Nerve Not Verve little chance of making up the ground required to win.

Yet to claim a group 1, Mertens has won three group 2s, two group 3s and now 11 listed races, but Thursday’s $300,000 Cup was the second richest from a prizemoney perspective.

While Whitcharchar Star had won three of his four races leading into Thursday, it was only two-and-a-bit months ago the horse was beaten in a 0-58 race at Yarra Valley. But he came off a 2400-metre heavy track win at Sandown just five days earlier.

“It just goes to show how well Chris can get these tried horses going and especially stayers.”

Mertens followed in the footsteps of his father Peter, who won two Warrnambool Cups as a jockey.

“He was my only ride, it’s my first Warrnambool carnival winner, so what a thrill,” he said.