Ashwin celebrates one of five wickets in the second Test

Days like these are the kind to be feared when touring India. For all the planning that has gone into getting this England side to where it is at, especially away from home, no amount of preparation can mitigate for what the individuals might be feeling as they rest their heads down on Sunday evening. Already down and out in this match with three full days to go.

Skittled for 134 and giving up a first-innings lead of 195, even the stupid money will be on India to square the series. That they boast a 259 lead was largely down to Ravichandran Ashwin’s five for 43, building on Rohit Sharma’s 161 on Saturday. Utilising the elements in his control, such as a turn and bounce that had batsmen wary before they arrived to the crease, he reeled off a 29th five-wicket haul, a second in as many innings, drawing level with Glenn McGrath on the all-time list from 102 fewer innings. As such, India’s first effort of 336 all out looks far greater, on a par with the 578 that secured England’s lead in the previous match.

There is a long history of touring teams crying foul in the subcontinent. Those too young to remember the wrangles over officiating bias, notably Mike Gatting’s row with Shakoor Ranor in 1987, were given a crash course in the reaction if not the intent on day one with a couple of odd third umpire calls. Day two provided more home-schooling on the kind of outrage elicited in these parts. Covid-19 protocols mean home umpires are standing across these four matches. And this new normal dug up old grievances.

READ MORE: ‘The hardest craft’: The perception and curse of being an England spinner

Here we were treated to some familiar wrangling over the state of the pitch. This was, unequivocally, a typical “raging turner”, the kind you get out here one way or another. That as much was clear on day one. India had the fortune of winning the toss and batting first, as England did for the first Test. Batting is only going to get tougher, and when you consider the position of the match alongside the figures of 15 wickets across the day’s 89.4 overs, it might save some time to shake hands and head into the third Test at Ahmedabad with scores level.

In one way, you’d be foolish to expect anything less from the pitch on offer, and not just because India came into this match 1-0 down. 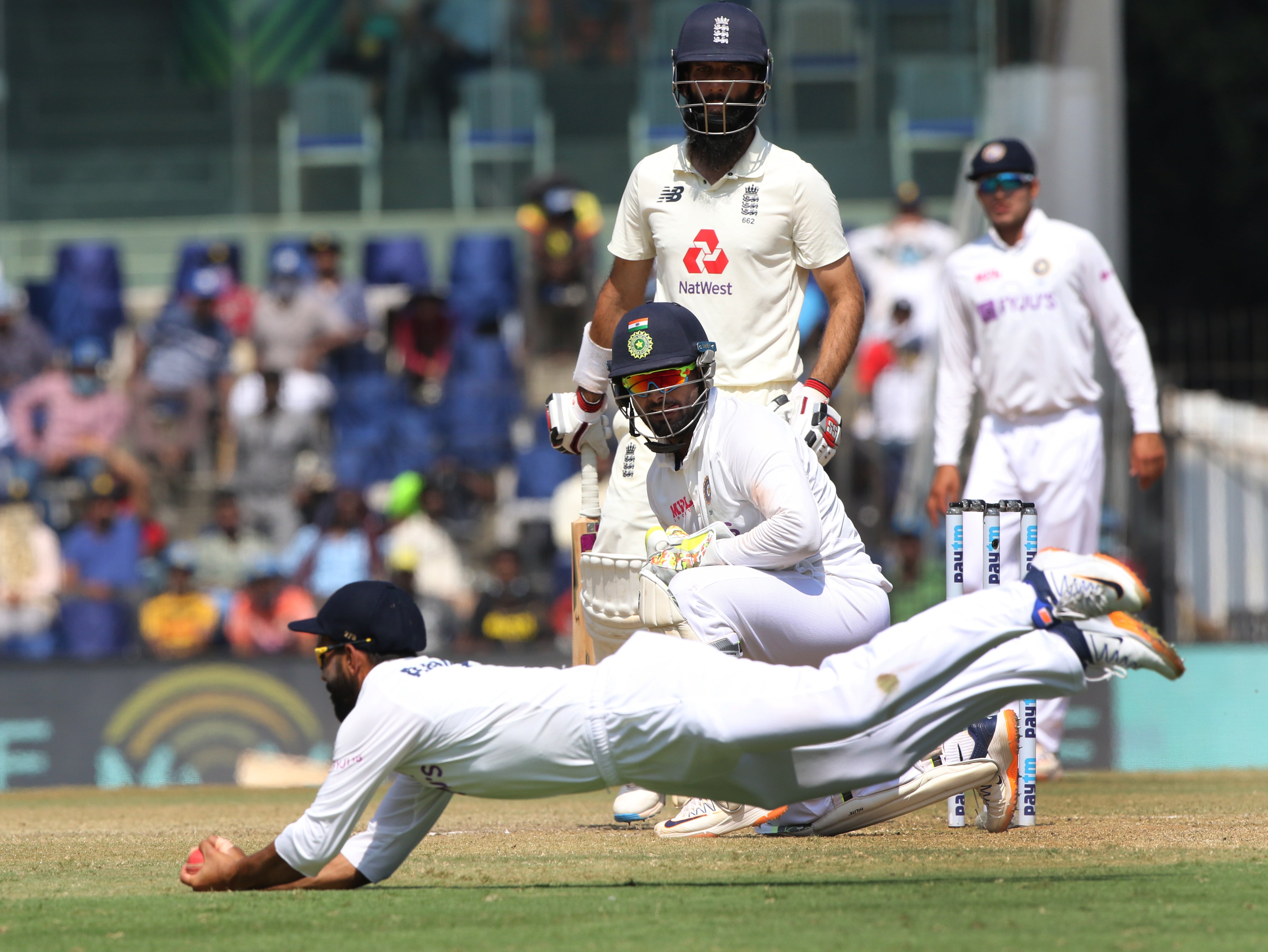 This is a unique situation of playing consecutive Tests at the same ground, and it’s perhaps not surprising a surface that had fielders running across it for five days, with four days preparation in between, would play so differently to the one that saw 1,285 runs scored on it barely a week ago. It is also worth noting the turn on day one was, officially, more than witnessed on day two. And a quick run-through Sunday’s dismissals should also counter any rabid opinions of malpractice.

The final four Indian wickets to fall featured Ishant Sharma clothing a full toss to Rory Burns at midwicket, Kuldeep Yadav and Mohammad Siraj backing away, offering timid and flashy edges respectively through to Foakes. Four boundaries from Rishabh Pant (58 not out), including a third six of his innings, added the bulk of the 29 added to the overnight 300 for six, and gave the wicketkeeper-batsman a sixth half-century and second of this series after a glitzy 91 in the first Test.

The tourists weren’t helped by Burns missing the first straight delivery of their first innings to fall LBW to Sharma. Dom Sibley, having found a way to get himself to 18, was unfortunate to clip the ball with the back of his bat towards leg gully where Virat Kohli was lurking. 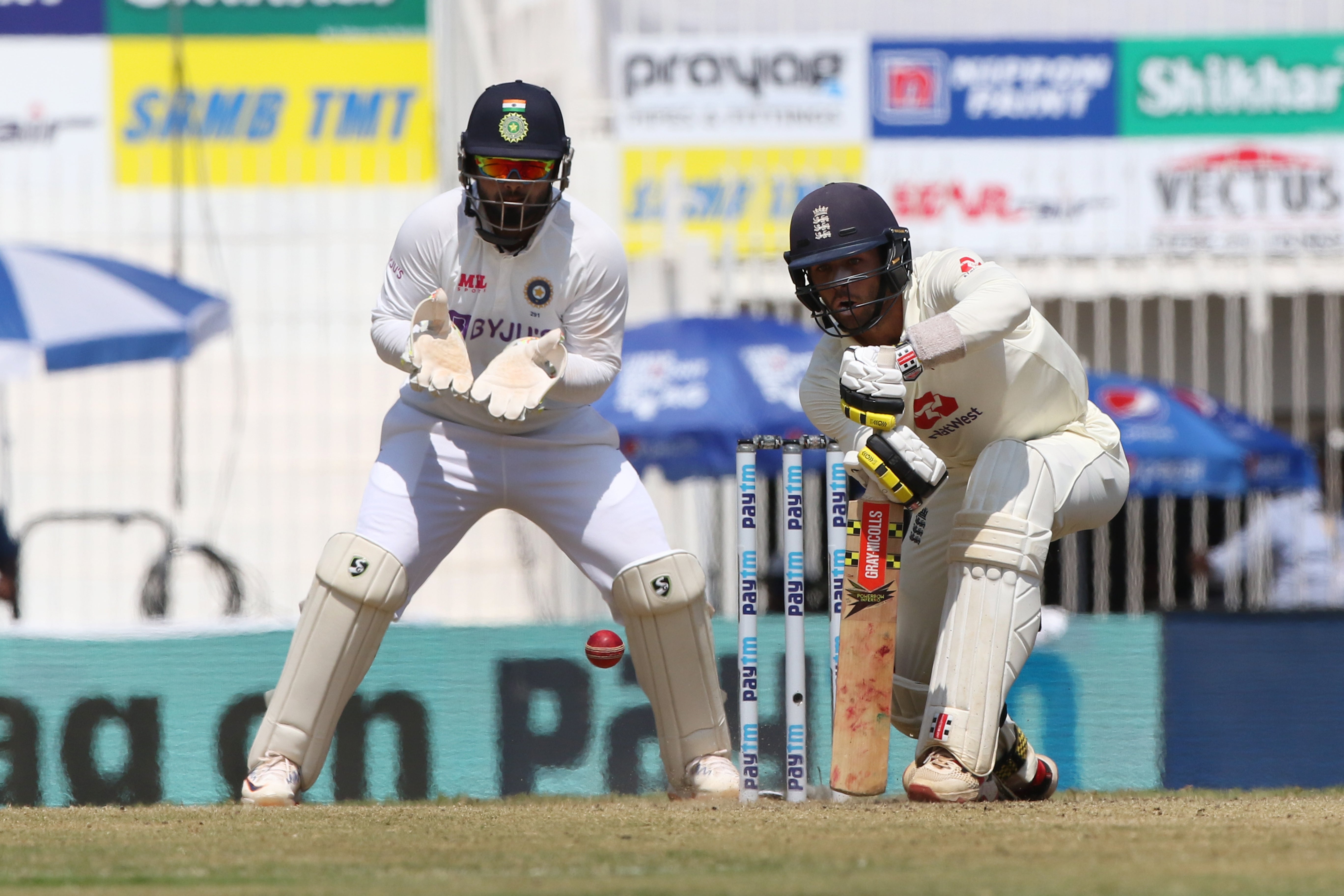 Ben Foakes put up some resistance for England

The real gut-punch came when England captain Joe Root was dismissed for just 22, his first under 150 score in first innings this year. That it came via a sweep shot he plays better than anyone in the world felt particularly poignant, undone by his own trusty weapon when he top-edged from outside off stump to Ashwin at short fine leg. Axar Patel the one to mug Root with his own knife for the left-hander’s first wicket on Test debut.

A hard-handed push from Dan Lawrence, who acquitted himself well right until the final moment before lunch saw England go into the interval at 39 for four. Ashwin then registered his second with the delivery of the match, dipping on Ben Stokes to coax a straight bat and turning into off stump from middle.

What followed was a face-saving partnership of sorts from Foakes and Ollie Pope. The nature of India’s squeeze was characterised all the same by 15 overs that produced just 35 runs. But it at least allowed the England dressing room door to settle.

Just as Pope was looking settled on 19, he offered a feather down the leg side from Siraj’s first delivery of the match, taken after a brilliant dive from Pant to his left. A lunge from Moeen Ali gave Patel a second, caught at first slip by Ajinkya Rahane. Stone then gave up a tame chip to midwicket to suggest the end would come soon with England well short of the follow-on target.

That option was wrestled away thanks to some diligence from Jack Leach, whose 29-ball stay pushed England to a deficit of 198. Sharma registered on the scorecard for his wicket thanks to another diving take from Pant before Stuart Broad’s under-edge onto his own stumps gave Ashwin five.

It was fitting that Foakes would remain unbeaten. Set for a clear run in the final three matches of this series with Jos Buttler now back home ahead of the limited-overs series, this was an opportunity to convince England that both could be part of the same XI. His work behind the stumps during his 95.5 overs in the field meant India’s 329 was the highest score without the concession of a single bye. Just as valuable was his application in front of them.

He’d end with a black mark against him when he missed the stumping of Rohit Sharma on 20. By then, the deficit the Surrey man had helped chip under 200 had been established by the same batsman’s bombastic pull shot off Stone for six in the third over. The right-hander was double lucky to still be going when he padded up to Leach on 21 but was saved by the presence of his bat behind his front leg, with no intention of it being used.

Leach was able to remove Shubman Gill LBW, but as Rohit and Cheteshwar Pujara took India comfortably to 54 for one, the difference was clear. The hosts have batted and bowled better than England in home conditions. Amid all the noise about the pitch, that, fundamentally, has been the difference.