Six races over February and March will be subject to tougher whip restrictions as part of a trial, which Racing Victoria says will be invaluable to Racing Australia’s wider review into national whip rules.

Racing Victoria has publicly called for whip reform and tabled such a submission to Racing Australia in November, but the national body has not yet adopted the state’s proposal for the number of permitted whip strikes in races to be reduced to between five and eight.

But Racing Victoria will run its own trial over the next two months as part of the Country Mile Race Series, limiting jockeys to a maximum of five strikes throughout the entire race. 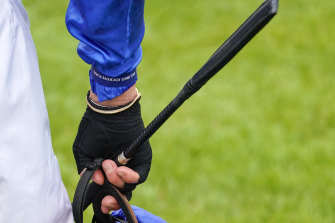 In the event a jockey exceeds the new restrictions in those races, they risk being fined or suspended and the horse is at risk of being declared ineligible for the series final at Moonee Valley on All-Star Mile day.

“Racing Victoria has publicly outlined since September 2020 that it believes whip reform is essential if racing is to retain its existing audiences and ensure that the sport is attractive for the fans and employees of the future,” Racing Victoria executive general manager Greg Carpenter said.

“The trial of races with limited use of the whip throughout the upcoming Country Mile Races Series is an important exercise, which will assist us with gathering data in areas such as wagering, fan engagement, participant support, conduct and safety of the race, and impacts on form lines.

“This information can only add value to the quality of the deliberations by all of the State Principal Racing Associations that will be debating potential changes to current whip rules over coming months.”

The current Australian Rules of Racing permit the use of the whip a maximum of five times in non-consecutive strides prior to the 100m mark and at the rider’s discretion in the final 100m of a race where its use in consecutive strides is permitted.

However, significant breaches of the rules, in particular in recent runnings of the Melbourne Cup and other spring carnival feature races, have led to Racing Victoria stewards coming down harder on jockeys.

Kerrin McEvoy was last year fined a record $50,000 for breaching the whip rule on Melbourne Cup runner-up Tiger Moth before the fine was reduced to $30,000 on appeal. McEvoy whipped Tiger Moth 13 times before the 100m mark – eight more than permitted.

“We hope that participants will engage in the series in the spirit intended and the penalty regime is designed to reflect that,” Carpenter said.

“If there is a breach and forfeiture of any prizemoney by a jockey, it will go to the Jockey Welfare Program and not be retained by Racing Victoria.

“While this trial represents just six races of more than 4000 run in Victoria each year, the data and learnings that come from it will be invaluable as we look to shape the future of racing for generations to come.”

The five heats will be run at Colac, Swan Hill, Ballarat, Pakenham and Wangaratta in the lead-up to the March 13 final and are limited to Victorian country-trained horses only.