Home » Sports News » Root ‘desperate’ to lead Ashes tour, but no decision made yet

Ian Watmore, the chairman of the England and Wales Cricket Board, insists he has until the plane departs for Australia in November to settle any issues that could prevent the Ashes tour from going ahead.

England are expected to pick the Ashes squad next week, after the players have been given final details of quarantine and COVID arrangements. Any who decide to withdraw will tell the England management before the Ashes squad is picked.

The Test specialists are expected to leave for Australia on November 4 or 5 with those playing in the Twenty20 World Cup joining up after that competition finishes on November 15.

With captain Joe Root failing to fully commit to the tour this week, there are still tricky negotiations to be held with the England players as they hold out for the best possible conditions for their families to travel to Australia.

“We’re working hard to avoid any withdrawals,” said Watmore. “Cricket Australia know what we need to make the tour successful, and they’re working with their government and state governments to deliver it. We need to see the detail, check it out with the players and management, and either push back or commit. We’re only part-way through the process.

“It’s not a red-line type of discussion, but we’re working hard to provide an environment in which our players and their families want to go and perform to their best. If Australia can deliver that, then great. If not, we may have to have more challenging discussions. 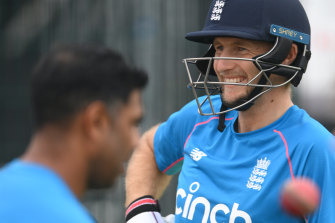 England captain Joe Root is yet to fully commit to the summer Ashes tour.Credit:Getty

“We are trying to get the best environment to get the whole squad out there. It is a complicated picture. There is no simple ‘It must be decided by x’, apart from when that plane goes to Australia.”

Root, speaking after he was named the Cinch Professional Cricketers’ Association player of the year, is expected to make himself available, but said: “I feel it’s so hard to make a definite decision until you know,” he said. “That’s why it’s so important that we get all the information. I’m desperate to be part of an Ashes series, I always am, it’s that one series, as an England player, that you want to be involved in and that will never change.

“So, of course I’m desperate to go, for the group we’ve all got to find out what the position is and make a decision on the back of that.”

The players’ anxiety will not have been helped yesterday by the news that Tasmania’s Sheffield Shield match in Brisbane was postponed because of four COVID cases in Queensland, the venue for the first Test. The players fear being locked down if a state government takes a hard line over any COVID outbreak and Watmore added: “Australia have a federal system, which adds complications, so we have to work through that.” 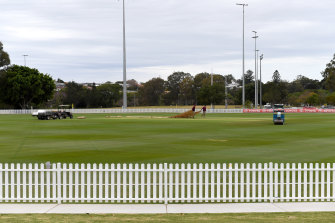 The scene in Brisbane on Tuesday following the postponement of the Sheffield Shield clash between Queensland and Tasmania.Credit:Getty

It has been a difficult month for the ECB, with the abandonment of the fifth Test against India and the cancellation of the Pakistan tour.

Watmore, speaking for the first time about the Pakistan decision, admitted the call was made by the board without consulting the players and reiterated it was taken to protect their mental well-being at the start of a busy winter. He declined to comment on the security advice given to the ECB, and the threat made to the New Zealand team was not shared with the board.

“I’m very sorry to anyone who feels hurt or let down by our decision, particularly in Pakistan. The decision the board made was an extremely difficult one,” he said.

“I won’t go into details, but we received advice on security and player welfare and took the decision we made. We had to make it quickly because of the short term to the World Cup and the New Zealand exodus from Pakistan. They were all factors, but the primary consideration was the welfare of the players.”

The decision was met with widespread anger in Pakistan. Ramiz Raja, the chairman of the Pakistan Cricket Board, accused England of a “western bloc” mentality and that Pakistan had been “used and binned” after touring in England at the height of the COVID crisis in 2020. Watmore’s lack of explanation will do little to placate their anger and they will still worry that England will not tour in 2022.

“We will have longer to plan for 2022 and this trip was impacted by events very close to the time frame,” said Watmore. “I don’t know if you read President Biden’s mind, but I didn’t know he was going to evacuate Afghanistan or that New Zealand would pull out whilst effectively warming up on the pitch, he added. “We need to rebuild our relationship with Pakistan and will refocus on going there in 2022. This wasn’t the right time. Obviously we’re extremely grateful to Pakistan coming here last year and we will do everything we can to deliver the scheduled tour next year.”