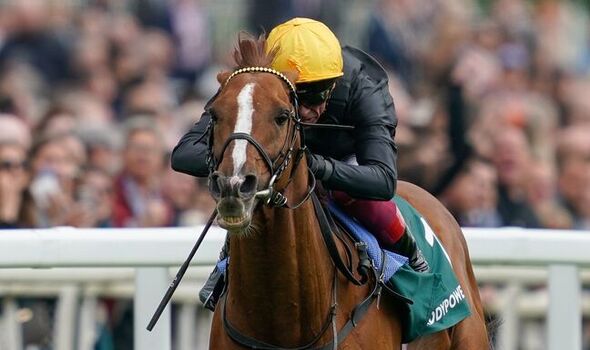 The trainer of Stradivarius has said he hopes the horse can replicate the likes of tennis legends Roger Federer and Rafael Nadal when he goes for a fourth Gold Cup win at Royal Ascot on Thursday. The eight-year-old Irish thoroughbred is already cemented has an icon of the sport, having also won the Goodwood Cup four times and earned his owners more than £3 million in career winnings.

Ridden by Frankie Dettori, last year the horse completed an historic hat-trick in one of the world’s most famous flat races having already won in 2018 and 2019. And he’s among the favourites this time around, quoted by the racing post at 9-4, behind 11-8 favourite Kyprios.

And trainer John Gosden is now hoping the horse can replicate other sporting greats by defying age to win a fourth crown. When asked by ITV Racing if Stradivarius could still produce his best despite turning eight he replied: “It’s a fair question. He was absolutey supreme at five or six.

“But I was impressed with how he picked up at the Yorkshire Cup [which he won in May] and he worked nicely here earlier this week. So I’ve every hope that like Mr Federer or Mr Nadal, he can get on the court, or like an old boxer get in the ring, and still hold his weight.”

JUST IN: The Queen ‘set to surpass £9m Royal Ascot earnings’ with royal ‘proud of achievement’

However Gosden, with over 3,000 winners to his name, was reluctant to take credit for the horse. When asked if it would be his greatest achievement of a trainer to see him win the crown for the fourth time, he said: “I think it would be down to the horse.

“He’s got the mind, the strength, the body, and the constitution. A trainer is only as good as his horse, you can realise their full potential but you can’t do more. So it would be all down to the horse.”

Certainly, being compared to Nadal is a good omen. The Spaniard, 36, has defied fitness struggles, and the doubters, by winning both the Australian Open and French Open titles this year.

His latest triumph at Roland Garros culminated in him beating Casper Ruud in the final, despite not having feeling in his foot following a series of painkilling injections. It took him to 22 Grand Slam titles, two clear of Federer and Novak Djokovic.