Australia’s bowling coach during the ball tampering scandal has denied any knowledge of the sandpaper plot and called for Cricket Australia to make public its investigation.

David Saker, unveiled on Thursday as the Melbourne Renegades coach, said the release of the report would help put to an end some of the questions around the events of Cape Town in 2018. 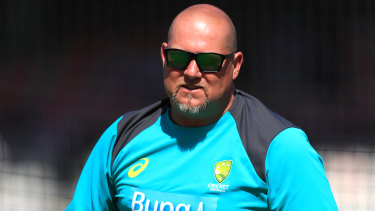 David Saker, Australia’s bowling coach at the time of the ball tampering scandal, has urged Cricket Australia to release its sandpaper investigation.Credit:PA

“That would be up to CA. I can’t see any point why it wouldn’t be released, but that’s, yeah that’s up to them the way they want to handle that,” Saker said on Thursday morning.

Asked why the governing body should release the report conducted by the governing body’s then head of integrity Iain Roy in the days after the incident, Saker said: “Because these questions keep coming up, maybe if it’s released, then maybe questions might stop but I don’t think they will and the questions will keep getting asked.”

CA said on Thursday that it would not release the report.

The issue resurfaced last month after comments Cameron Bancroft made in an interview with The Guardian in the UK, suggesting the bowlers were aware of the plot to use sandpaper.

Saker said he was not aware of any plan for Bancroft to bring sandpaper onto the field to use on the ball. Australia’s bowlers in the game last month issued a statement, saying the first they knew of the presence of sandpaper was when they saw it on the big screen at Newlands.

“Well, there’s no doubt I had no idea there was any sandpaper involved,” Saker said.

“As far as we knew that we were using normal tactics to get the ball reverse-swinging so that’s as far as I know. I heard the comments and the Iain Roy thing, we’ve said what we have to say and that’s where I’d leave it.”

Saker said he was “comfortable” with the issue but accepted questions would continue to arise from the episode, which he likened to Trevor Chappell’s underam ball 40 years ago.

“I’m not sure it’s going to get anywhere, I think everyone’s told what they’ve told, they’ve had inquiries about it,” Saker said.

“We’ve all gone in and did our bit so I can’t see it going any further, but the questions will keep coming. There’s no doubt about that, but that’s just a part of life, you got to deal with that but it’s never going to go away, that’s for sure.”

CA chief Nick Hockley said last month that the organisation would not release the report.