Home » Sports News » Shows of class and character will be what decides the Ashes, as it always has

It was renowned basketball coach, John Wooden, who opined that “ability may get you to the top, but it takes character to keep you there”.

Some people believe that we pick our parents and our time of birth. I’m not so sure about that, but if I did, I reckon I won the jackpot. Being born into a sporting family and growing up in Australia in the ’50s, ‘60s and ’70s was a bonus.

Cricket in Australia in the ’60s and ’70s was a microcosm of what was happening in the wider community as players demanded more say in their affairs, while the administrators were trying to maintain the status quo or, even thwart them.

Growing up, dreaming of playing Test cricket for Australia was what a lot of youngsters did. I didn’t really believe it would happen. It felt more like a pipe-dream.

Luckily for me, the guy in the next bedroom was laying down the footprints for me to follow to bring that dream to life.

By the time I made it to the Australian team, I was as well prepared as anyone could be. 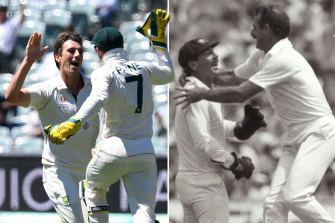 I debuted against England in December 1970, at a time when some young blood was being injected and Ian was elevated to the captaincy.

In hindsight, that 1970-71 Ashes series proved to be a seminal time in Australian cricket.

In that series, a hardened group of senior players – Ian Redpath, Keith Stackpole, Ian Chappell, Doug Walters, Graham McKenzie, John Gleeson and Ashley Mallett – were joined by Rod Marsh, Dennis Lillee and myself. None of us knew it then, of course, but it was the start of an exciting era of Australian cricket.

The success of our team was built on copious dollops of talent and abundant character. Two of the most important members of that unit were Marsh and Lillee.

My first memory of Rod is when we both represented our respective States in a schoolboy carnival in Brisbane; Rod was 14 and I was 13. I didn’t play in the game for SA against WA, but nevertheless took an instant dislike to the solidly built opposition wicket keeper with tree-trunks for legs and long hair poking out from under his WA cap. His stare was intense.

The next time I saw him was in the Sheffield Shield, six years later. This time I did play, though my opinion was no different. He was still solidly built, still had his hair hanging out from under his cap like Dicky Knee from Hey, Hey It’s Saturday and he didn’t stop chirping from the first ball of the day, to the last. He never actually spoke directly to you; just about you, as he walked past with teammates.

It wasn’t until I began playing with him in the Australian team that I began to appreciate what he brought to the contest. He was hard, uncompromising and good fun to be around. Behind that intense stare was a warm-hearted and generous individual. A better team-man would be hard to find.

Despite outward appearances, Rod was an excellent athlete and tough as nails. There were times when he kept wickets to Lillee and Jeff Thomson when his hands were red raw from the pounding that they took, but he never flinched. He seemed to enjoy the pain.

I reckon everyone with whom I played, would have died for the green cap. Rod was no exception; except that I reckon he would have killed for it if necessary. No one enjoyed a victory celebration more than him and none hated a loss more.

Rod’s character was there for all to see. When Bill Lawry declared on him when he was 92 and on the verge of becoming the first Australian wicketkeeper to make a Test century, Rod never batted an eyelid. Winning for the team was what it was all about.

Dennis Lillee was a lamb by comparison. I had played a couple of Shield games against him before we toured New Zealand together in an Australian A team led by Sam Trimble. We had hardly spoken two words to each other before we met up in Christchurch.

During the first few days of the tour, it became obvious that the 20-year-old Dennis hadn’t seen much of the world outside of Perth. As sporting teams can mercilessly do, we pounced on his innocence and played some pranks on him.

It was like stealing candy from a baby. But, by the end of the six-week tour, Dennis had become the biggest cynic the world has ever seen. He didn’t believe a word that anyone told him from then on.

As a bowler, Dennis was express in his early days, but his run up was ungainly. This put undue strain on his back, until it eventually broke during a tour of the Caribbean in 1973.

He spent many months in a full-body plaster cast and missed 18 months of cricket.

Very few people could have come back from such a catastrophic injury. That he did so and went on to become one of the standout fast bowlers of his era, and in fact any era, speaks volumes about his character.

Over the next 14 years, I got to know the two of them extremely well. I couldn’t have picked two better teammates. We went through good times and bad together, but we had each others back for the whole journey.

In the current Australian team, we are blessed with talent and there is a core group of players, who would match the champions of the past in resilience.

Australian keepers are tough. If they were any tougher, they’d rust. Tim Paine reminds me in many ways of his illustrious, “rusty” predecessors Marsh, Healy and Gilchrist. Pat Cummins has many of the traits of his fast bowling predecessor. He has had his own injury setbacks and has an indomitable will, much like the great man.

Steve Smith is an intense personality with considerable batting skills. Warner, Labuschagne, Hazlewood, Starc and Lyon have all shown that they share many qualities of our champions of the past.

They will need to call on every bit of that character and resilience, if they are to prevail against a determined England squad, in what looms to be an evenly contested Ashes series.

As the hugely successful US college football coach “Bear” Bryant eloquently said, “show class, have pride, and display character. If you do, winning takes care of itself”.