Several of the country’s biggest names are set to have their pockets lined as Australian cricket’s competing interests rear their heads in Thursday night’s Indian Premier League player auction.

Steve Smith, Glenn Maxwell and Aaron Finch are among 35 Australians who will be keeping a close eye on proceedings in Chennai, hoping they get a slice of the near $35 million remaining in the purse of the world’s richest T20 tournament. 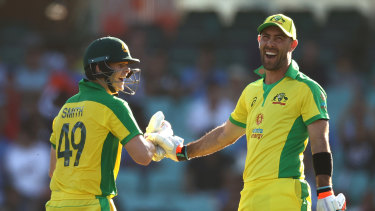 It is in Cricket Australia’s financial interests to have more players bought as Jolimont gets a small percentage of a player’s auction price. CA’s goal of winning a maiden men’s Twenty20 title is also served by having more of its stars plying their trade in the host nation of this year’s World Cup; less so its aim of retaining the urn.

With players to be released from state duties from April 1 to play in the IPL as part of the agreement with the players association to extend the domestic season, Smith, Marnus Labuschagne and Ashes hopefuls Moises Henriques and Jhye Richardson will miss out on rare red-ball games if signed up.

Already guaranteed a start in the IPL are Test stars Pat Cummins, Josh Hazlewood and David Warner, though Mitchell Starc has again turned his back on a mega payday by sitting out the tournament.

The T20 World Cup overlaps with the start of next season’s Sheffield Shield, which means the likes of Warner, Smith and Cummins may not have much more than a handful of longer-form matches before the Ashes.

The IPL generally falls during the players’ leave period, but the pandemic has forced the domestic season into mid-April.

Agents have been told players will be granted no objection certificates (NOC) for the IPL from the start of April, but it is unclear when those with county cricket commitments will be able to leave.

This has raised eyebrows among some figures, who are questioning how CA can allow players to leave early to play in India’s domestic competition but not England’s.

Despite being its captain, Smith was released by the Rajasthan Royals, coached by Australian Andrew McDonald, after a lean return in last year’s tournament in the UAE. Maxwell and Finch were also let go by their franchises.

A source familiar with the IPL market said Smith has attracted the interest of at least one franchise, though it is unlikely he will command the $2.5 million fee he was paid by Rajasthan.

There are 292 players going under the hammer for the 61 slots left on the eight rosters, with only 22 remaining for non-Indian players.

“There’s some blokes in the team who are pretty keen to watch tomorrow,” Australia T20 squad member Kane Richardson said. “I reckon there’ll be some nervous boys.”

Teams have been plotting for months their buying strategy, with some even conducting mock auctions to workshop the various scenarios that could play out.

“You do a gap analysis of all the the teams and we see what every team has got to spend,” Simon Katich, the coach of the Virat Kohli-led Royal Challengers Bangalore, said on SEN.

“You look at that and what we have to spend and we structure accordingly to see who we can potentially could get for what.

“The last week we've done six mock auctions where different staff members take different franchises and look at the gaps and bid on players against each other to try and figure out who potentially will go for what and which players will be in most demand.”

Meanwhile, Henriques played a lone hand for NSW as the star-studded Blues were dismissed for 165 by Victoria as the Sheffield Shield competition returned on Wednesday. In reply, the Vics were 0-61 at stumps on the first day.