Steve Smith has clung onto his tenuous place in Australia’s Twenty20 batting order for the start of the Sri Lanka series, even as captain Aaron Finch admitted Josh Inglis was extremely unfortunate to be left out of Tuesday night’s opener.

In 15 T20 internationals since the onset of COVID-19, 33-year-old Smith has cobbled 205 runs at 18.63 while striking at 110.21, and played only a peripheral role in the World Cup win in the United Arab Emirates last year. 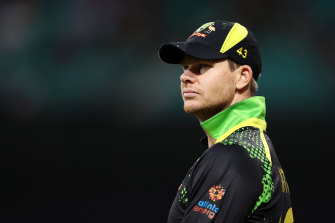 Steve Smith is being challenged for his place in Australia’s T20 team.Credit:Getty Images

By contrast, Inglis’ six Australian appearances in the past nine months have reaped 179 runs at 35.80 and a strike rate of 145.52, floating up and down the middle order in a similar role to the one prescribed for Smith.

Nevertheless, Finch argued that Smith’s quality and adaptability as a player kept him in the front rank as far as the selectors were concerned, able to retrieve an innings in the event of early wickets, or shuffling down the order behind Glenn Maxwell and others should the top three flourish.

“The ability for Steve is to play that role where if we lose a couple of wickets in the powerplay then he comes in and plays that top-order role,” Finch said from Colombo.

“But if we get outside the powerplay then Maxy will go in at No. 4 and Smithy will slot into that middle order. 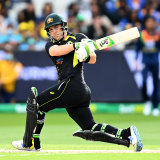 “He’s someone who can read the game as well as anyone and is as skilled as anyone in the world, so just giving him the freedom to go out there, take the game on and play what’s in front of him is super important. We’ve got all the confidence he can play that role unbelievably well.”

Inglis, 27, is considered one of the most destructive players of spin in Australia, once described by Mitchell Marsh as a batter who “hits to funny parts of the ground”, and is also the clear understudy to Matthew Wade as wicketkeeper.

“He’s so close, he’s been really stiff,” Finch said of Inglis. “Every chance he’s had he’s taken with both hands, and he’s a super-talented young player.

“He’s shown his ability to float throughout the order in international and domestic cricket. There’ll be an opportunity for Josh at some point.”

Finch, meanwhile, is hopeful that a full recovery from knee surgery last year will allow him to regain batting rhythm at the crease, after rushing back to play a part in the World Cup last year and then struggling for runs in the Indian Premier League.

“It was really good to get a good block of rehab and some time off to fully heal it,” he said. “It feels as good as it has since the surgery, so really confident that my movement and everything can be as sharp as it possibly can be and where I need it to be to be successful in international cricket. That’s been a real positive over the last couple of months.”

In contrast to the conditions expected for the Test matches in Galle, the square in Colombo is well-grassed, prompting the tourists to pick three fast bowlers opposite the left-arm spin of Ashton Agar for the opening game – a similar balance to the one they used in the UAE last year.