Record-breaking rider Jamie Kah is set to return to action later this week after missing the entire spring carnival through suspension.

The champion jockey – who is the first woman to win the Victorian premiership and the first to ride 100 metropolitan winners in a season – was suspended for her involvement in the Mornington Airbnb scandal in late August. 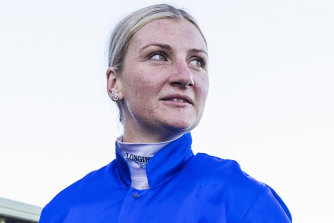 Jamie Kah is set to return to racing this week.Credit:Getty Images

Her planned return was interrupted when she broke her nose, but her manager James Henderson says she is due to have stitches out on Monday and would hope to be back in the saddle by the end of the week when the $300,000 Pakenham Cup, the last of the big country cups races, is the main feature.

“Saturday is the focus, with some rides committed. She may ride Friday night [at Moonee Valley] but we will wait and see how tomorrow goes [after the stitches are removed],” Henderson said on Sunday.

The Pakenham Cup could be a target for that talented veteran stayer Sound, whose Flemington trainer Mike Moroney believes deserves a shot at a stud career.

Sound, ridden by Jamie Mott, turned party pooper on Saturday when he landed the 2400-metre  group 2 Zipping Classic at Caulfield, delivering a long-odds boilover. In so doing he spoiled the Glen Boss farewell as the retiring star rider was well beaten on hot favourite Spanish Mission.

Moroney is a big fan of stout, German, staying bloodlines and believes that German-bred Sound could be just the sort of horse to succeed at stud in New Zealand, where more emphasis is placed on stamina than in Australia.

“These staying bred horses, German horses in particular, they’ve got longevity in their legs without any doubt, and he’s done a great job,” he said.

“He’s now won $1.8 million in prizemoney. He has been a bit maligned as being a bridesmaid, but he got it right.

“He’s hopefully going to find a stud in New Zealand, we’re hoping. It is a good place to breed nice stayers and they are renowned for doing it. He’d be the right sort of horse in the right home.”

Moroney came to prominence in Melbourne more than two decades ago, winning the Victoria Derby with Second Coming in 1997 and then taking out the Melbourne Cup three years later with Brew.

He is adept at preparing all types of horses over varying distances – earlier this year the mare Tofane won the group 1 Stradbroke Handicap and Tatts Tiara, both over 1400 metres – but he relishes the challenge of preparing stamina packed horses to run over longer trips.

The Zipping win was Sound’s best in this country since arriving to join Moroney’s stable to run in the 2018 Caulfield Cup. It is a tribute to the trainer’s skills that the entire is still fit, keen and focused on racing.

“We might back him up in the Pakenham Cup next week. We’ll see how he pulls up,” Moroney said after the Zipping win.