In a previous world when events and parties were things that didn’t carry an air of danger and illegality, venues were a key gauge of what sort of night you were going to have. But really, the key indicator was the company.

So as we went into Lord’s for the final of the Bob Willis Trophy, with two of the most consistent first-class counties in attendance, there was a sense that entertaining times were ahead.

But rain over the first two days dampened the enthusiasm for the contest. Maybe not so much for Somerset, who had fashioned a reasonable first-innings total of 301. Or indeed Essex who had the tag of best red-ball side in the land to defend. But for the broader purposes of bringing a more accessible wow factor to domestic long-form cricket, beloved in our echo chamber but ignored beyond.

But as day three ended with Alastair Cook walking off with 172, at a joint where he has cut deliveries of all shapes in the middle, here, with a 67th first-class hundred of his career, was our unifying glory. While he was not solely the reason we are here (though his runs, now the most of anyone in this competition, were a lot to do with why Essex were) the presence of a great of the game has elevated a fixture that already had a bit going for it. And suddenly those who could not be here rued it all the more.

For the sake of housekeeping, it is important to point out that his end came four minutes before 6pm, with Essex 266 for six. Lewis Gregory was the only to finally move him in the 94th over. To his 289th delivery faced, England’s most productive run-scorer made his first misjudgement, edging to Craig Overton at second slip to give Gregory a fourth.

It meant Essex will go into day four on 271 for six, 30 behind Somerset with 12 overs to achieve a lead that will confirm them as winners if this match ends in a tie. Thus, Saturday morning will carry extra intrigue. Even with his dismissal, Cook offered the game something.

Perhaps that seems like over-egging matters. But to many England fans, their favourite nudger-cum-farmer walked out of their lives when he strolled off the Oval two years ago having scored the final of his 33 Test hundreds in a win over India. Though he scored 913 runs in Essex’s Championship winning 2019 season, here was the most visible he has been since international retirement.

As ever when reacquainting with a familiar face, thoughts go back to revelries of the past, and no ground has been better to Cook and, thus, English cricket during his time than Lord’s. His name is on the honours board in the home dressing room four times. And though there was none of the Lord’s chortling roar when he struck a full toss from Jack Leach through cover-point, his 18th four, to take him to three figures, the raising of his Gray-Nicolls bat and helmet – supplemented by the grin and then followed by the touch of the ear and salute to the sky – carried the kind of nostalgia that nourishes during such grim times.

That being said, there was not the usual amount of familiarity with the Cook hundreds we are used to. Of course, there was ample time and judgement. But there were also cover drives. Graceful ones, suggesting time away from Test cricket’s harsh glare had lubricated those joints that at times made him look as dextrous as Lego.

Of his 18 boundaries, 13 came in front of square on the off-side and 10 were off the front foot with the crisp clunk of a half-volley struck out of the screws. Perhaps the best of them was the eighth overall, certainly the one with the best acoustics, which took him to an even 50 from 100 deliveries. 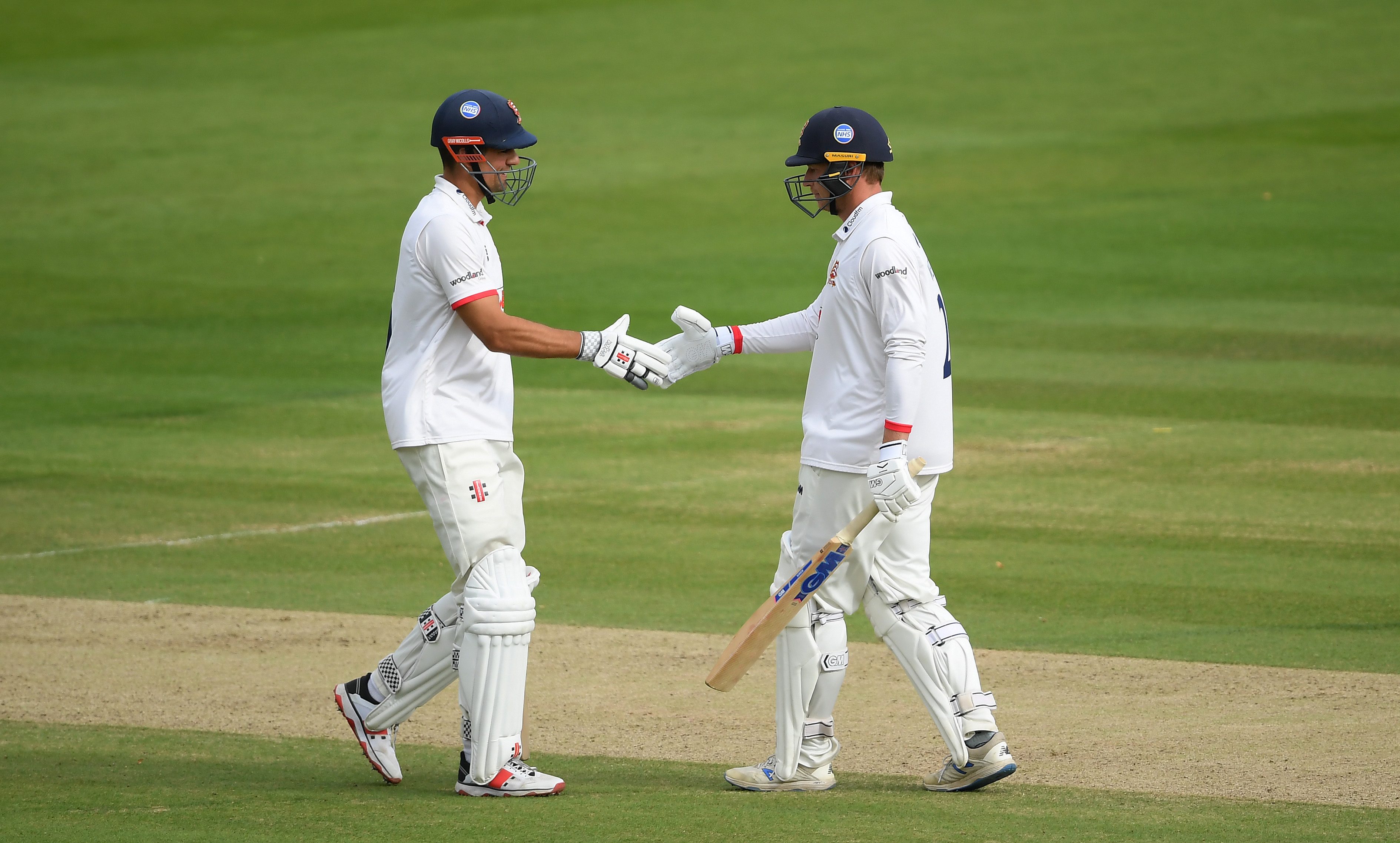 Another took him to 83, marking the century partnership with Essex captain Tom Westley, of which Cook had contributed a heady 64. That contribution had swelled to 99 by the time they had moved the second-wicket stand to 150. Westley would follow with a milestone of his own, with a typical wristy flick brought out for the first time with any conviction to take him to 51 from 128 deliveries. A usually fluent striker was left playing second-fiddle. And happy for it.

They would be parted on 170 when, with the first delivery faced after the tea interval, Westley flicked a tame leg stump half-volley from left-armer Tom Lammonby into the hands of opposition skipper Tom Abell at midwicket. A quick brace from Gregory turned 203 for two to 203 for four, only for Ryan ten Doeschate to do what he does and impress himself on the opposition to bring up another half-century stand. That, though, would be ended on 56 – and Ten Doeschate on 21 – when Overton picked up his first wicket of the innings from 20 frustrating overs.

In the end, only 99 of the 271 Essex runs today came a source that was not Cook. And perhaps the more profound statement from his bat was the clarity that showed the 35-year old is not thinking about walking away from the game as a whole just yet. Days like these are the pinnacle, especially when you are setting a new highest first-class score at Lord’s, beating the 162 against New Zealand here in 2015.

Those who step down from the top-level struggle to come to terms with the relative lack of attention and gravitas that becomes their new world. Understandably so: An existence cultivated in the bright lights can wither in the shadows.

But, truly, it has been the times in lower-profile surroundings that Cook has realised that his appetite for the grind and appreciation of kinship has not dwindled in his latter years.

“I enjoy playing with this bunch of lads,” said Cook at his post-match Zoom. “A lot of them, I’ve played a lot of cricket with. If Ravi Bopara were still here, we played our first games together aged 12. It’s just good fun.

“I was scared when I retired from international cricket of walking away totally becase it’s a big hole to fill, isn’t it? Suddenly walking off at The Oval in 2018 – the last time I played – would have been a big hole to fill. And I’ve really enjoyed hanging out in the changing rooms at Essex. And it makes it better when you win.”

That win will still take some getting. And maybe it says much about Cook’s competitive edge that though he credits Gregory with coaxing a misjudgement from him – “if I’d left it, I’ve have been alright” – he did make a nod to the setting sun casting an awkward strip of light across the middle of the pitch.

But the sun has not set on this match, just as it has not on Cook. At a time when good things are few and far between, that’s something to hold dear, if only for another couple of days.

Hollie Doyle to ride True Self in Saudi Arabia

Overseas jockeys allowed to ride on Group One racedays in Ireland