So here we are. One more day of competitive red ball cricket to go in an English summer that has been salvaged. Not many have witnessed it, certainly not those who revere it most. But as Somerset go into Sunday with a lead of 191, needing to bowl Essex out short of a target they will eventually set to win the Bob Willis Trophy.

That the final is poised so enticingly is down to the efforts of Tom Lammonby, the latest shiny new thing of the English game, who wowed with 116 composed runs to carry Somerset’s hopes into day five of this final. Both sets of players have done their utmost not to allow rain and bad light to dull this occasion. Lammonby is the latest to carry the burden, and he did so with impressive distinction.

Maybe it’s not for nothing that all three of the centuries scored in this match so far have been from left-handers, though any snake oil analysis of why that might be is certainly not for now. But while Eddie Byrom’s was his first of many, Sir Alastair Cook’s one of the last of loads, Tom Lammonby’s felt somewhere in between. Much closer to teammate Byrom than the England legend, but further along not just in number but maturity. The 20-year old is one to note down in permanent marker for future reference.

This was, after all, his third hundred in as many first-class matches, a format he had only graced this summer. If we’re going to be really cute, it’s a third in five innings that sees Somerset going into their last day of the season well in the hunt for a first red ball trophy in their history.

There was much to be said for the clarity of it all. The start – straight and risk-free – and the slow crescendo to his half-century. Two fours took him to that particular milestone, both off Simon Harmer. A deft sweep moved him to 49 and a more audacious lap to 53 off consecutive balls. 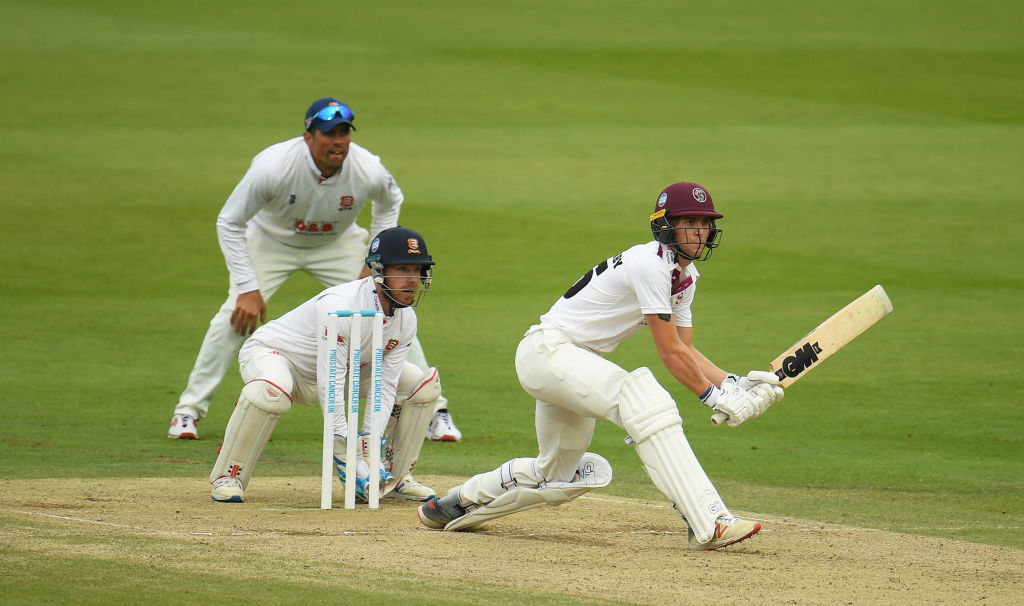 All in, six of the 15 fours that featured in his first 135 deliveries – the number it took to take him to his century – came off Harmer’s spin, which is an important nugget when assessing the quality of the knock. He played competition’s leading wicket-taker with a clear method. The seamers, too, were played down the ground when they were too full and worked around when slightly wide.

“I was really impressed,” said Porter at stumps. “I probably didn’t show it so much when I was out there bowling for him! I bowled some good balls that he hit for four. Only good players do that. Bad players don’t hit good balls out of the middle of the bat for four.”

Lammonby’s pedigree beyond what we have seen is most pronounced in his uncle, Ryan Campbell, the current Netherlands coach who played ODIs for Australia and Twenty20 international’s for Hong Kong. He met Campbell – the cousin of his father, who is also Australian – for the first time over the winter while playing first grade cricket in Western Australia for the Perth-based club Rockingham-Mandurah.

“Definitely not,” was his response to a question over potentially choosing Australia over England. While those conversations are still a long way off, this summer itself, and his six first-class appearances in it, have come quicker than expected. The Covid-19 pandemic meant Australian Matthew Wade was unable to fulfil his stint as Somerset’s overseas this summer. And while many urge that this is to be a crisis not to be wasted, Lammonby certainly has not.

“I don’t think it was supposed to be a season I was too nervous about, trying to contribute, trying to get into the first team. The way I looked at it was hopefully to get the opportunity and hopefully take it.” And how.

“The was a point where I was sat at home in a mood thinking there wasn’t going to be any cricket at all this year,” he said. “For us to get three or four months of cricket this year has been amazing.”

Harmer’s reaction to finally snaring Lammonby, who spent 201 minutes of a chilly Saturday facing 151 deliveries in the middle, said much about the duel they had engaged in. A classic arm ball did the trick, sliding on and finally forcing an error.

That is what this Essex side have made their business of doing: never wavering too far from a default position of always being in control. It is why they are defending County Champions and, after securing a first innings lead, favourites to win this competition, too.

So much of their success is done through imposing themselves on the opposition. But they are also good at calming things down. A page out of Alastair Cook’s book, perhaps, whose 172 on day three put them in position at 271 for six with 98 overs gone when play resumed on day four.

With 31 required to overtake Somerset’s first innings of 301 to secure the win in the event this match ends in a draw, they wasted little time in knocking those off. Or rather, Somerset’s attack made the task a lot easier for them.

14 came in extras, with four byes two balls into the 106th, which did at least finish with Lewis Gregory wrapping up a 14th five-wicket haul. He would go on to take a sixth when Simon Harmer was squared up, edging to Craig Overton at first slip, to eventually give him figures of six for 72 from 27 overs.

By the time the 120 overs were done, 337 for eight had been scored. Beyond what looked an unnecessarily tame 26 not out from 65 deliveries by Adam Wheater, which included close to zero risk when any quicks runs would have been a bonus, the match looked comfortably Essex’s way.

Just for a moment, certainly during the tea interval, that opinion was in the process of being revisited. Somerset had established a lead of 123 largely down to Lammonby, who had 94 to his name.

He and Ben Green (41) had put on 105 for the first wicket, striking out the first-innings deficit of 36 with ease even if it took them 19 deliveries to get Somerset off the mark in the second innings. Though the captain Tom Abell (15) had also departed – the first of Jamie Porter’s wickets – there was no reason to doubt Somerset’s capacity to post a target that was both enticing for their opponents and in their favour.

Alas, four deliveries after Lammonby had reached three figures, Porter had his second with first-innings hero Byrom chopping on, instigating a collapse of four for 21, in which those last three batsmen fell for a single run across 10 balls.

Just like that, a prospective imposing lead became a very real underwhelming one, of 152 with just four more wickets left to boost it, largely down to Porter who has four for 51 this time around after a more gruelling stint in the first innings of two for 85 from 29 overs.

By the time the seventh batsman had been dismissed – Steve Davies edging Harmer for Alastair Cook’s third catch at slip. Play was eventually called when bad light intervened at 5:44pm, with Somerset 227 for seven. Given the way the match is skewed, Essex were not complaining.

The work of their bowlers, especially in the latter part of the day, gives Lammonby hope: “It gives us a chance tomorrow,  Having seen Porter, Harmer and Cook bowl, the wicket is getting tricker each over, so it gives us hope.”

Should Sunday play ball with the weather, both teams have the opportunity to close out the first-class season with a bang. Even if it could not feel less like summer, these two will do their utmost to bring some much-needed warmth.